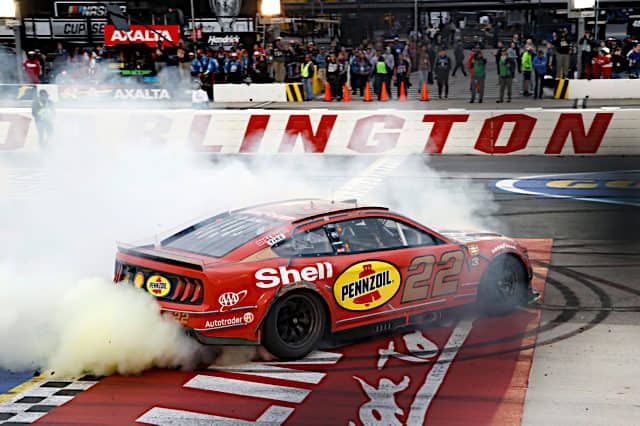 A week ago, some were openly wondering if Joey Logano would win a NASCAR Cup Series race in 2022. He’d had a couple of decent runs, but had only led 35 laps through the first 11 races. But in Sunday’s (May 8) Goodyear 400, Logano funneled all his previous frustrations into running up front all day at Darlington Raceway. He led 107 laps while racing the notoriously tough track until the white flag, when he had just one other contender to deal with: race leader William Byron.

Logano had run down Byron after the final restart, and as the pair came to the white flag, Logano laid his front bumper to the back of Byron’s No. 24, moving the Jeff Gordon throwback up the track and easily holding off Tyler Reddick for the final lap.

Logano’s win was roundly booed at the track, and while his move was a textbook bump and run, he hadn’t attempted to pass the No. 24 before the move, drawing the ire of fans and Byron, who called him a “moron” in his post-race interview. Logano is known for his aggressive style, and the move wasn’t a dirty one even if it wasn’t exactly squeaky clean. It was a needed boost for Team Penske, which hasn’t found victory lane as an organization since the Daytona 500.

And don’t forget Justin Haley. It’s easy to forget that Haley isn’t driving for a backmarker team anymore. He is driving for a brand-new one in Kaulig Racing, a team he’s had four Xfinity Series wins with, and they’re learning together how to contend at the Cup level.

Haley took a step in the right direction Sunday, working his way to a third-place finish, his first top five since he won the summer race at Daytona in 2019.

The top 10 featured a few surprises on Sunday, with Michael McDowell and Ricky Stenhouse Jr. also sharing a piece of that pie in seventh and eighth.

Darlington always generates its own buzz on the annual throwback weekend because of the nostalgia it creates for fans and teams alike. It began as a celebration of the return of the Southern 500 to its rightful Labor Day weekend date but was moved to spring in 2021 after a second race was added to the Lady in Black’s dance card for the first time since 2004 (there were three races in 2020 due to COVID-19 but the second date in 2021 was planned).

The throwback theme is exactly what the doctor ordered for NASCAR, too. Longtime fans get a tangible reminder of their best memories, and younger ones get to see what once was. The ghosts are always present at Darlington, and this weekend pays them homage.

Last week’s winner Chase Elliott had to go to a backup car after a spin in qualifying Saturday, and that meant starting at the back of the field. But Elliott didn’t stay down for long, cracking the top 10 in stage two. He survived a bobble or two in the final stage to finish fifth.

Defending champ Kyle Larson looked a lot like 2021 Larson early on, jumping to an early lead, but a lap 55 spin dropped him to the back of the lead lap. Larson worked his way forward again, climbing as high as 11th before a rare engine failure ended his day at the very back of the pack in 36th.

Defending race winner Martin Truex Jr. had a strong top-five car on Sunday, and showed it early, finishing fifth in stage one and runner-up in stage two. He led a total of 28 laps in the process and looked poised for a good finish. Unfortunately for Truex, he triggered a late race melee when he had to get out of the gas on a late restart, causing a chain reaction that ended his day along with several others’. Truex finished 24th.

While Hendrick Motorsports is out there doing Hendrick things, putting four drivers in victory lane in 2022, there’s another Chevrolet team getting things done, and doing it across the board.

Richard Childress Racing, a team which had fallen a step behind the sport’s elite in the 2000s, had a lot to brag about after Darlington Sunday. Reddick finished second and looks as if his first win is getting closer every week. Austin Dillon scored his best Darlington finish since 2020, finishing ninth.

But it doesn’t stop there. Kaulig Racing, Petty GMS Motorsports and Trackhouse Racing Team also have some level of RCR involvement, all racing with ECR power under the hood. Include Haley and 10th-place Daniel Suarez in the top-10 total, add Ty Dillon’s 12th-place run and the 26 laps Ross Chastain led, and it was a very good day for a team that’s no longer content to be second-tier.

NASCAR heads west to Kansas Speedway for the first of two visits (thanks, casino). It’s the first visit to a cookie-cutter 1.5-miler since Las Vegas Motor Speedway, and that makes it a test for both the Next Gen car and the teams.

The car put on a good show at Vegas, and much of that was due to the parity it seemed to bring. Will that be on display at Kansas and for 600 miles at Charlotte Motor Speedway? While some teams seem to have a better handle on it than others, there have still been some surprises week to week. That’s what NASCAR needs.

For teams, it’s a chance to take stock at a track that will be in the playoffs. There are three 1.5-milers in the final 10 races (Kansas, Las Vegas and Texas Motor Speedway), and for teams that haven’t seen the expected improvement since Vegas, it could signal a sense of urgency as the summer looms ahead.

How … many drivers in the race are future Hall of Famers?

The next class of Hall of Famers was announced last week, with Matt Kenseth, Kirk Shelmerdine and Hershel McGriff making the cut for induction in January 2023.

There’s always been talk about first-ballot or later elections and whether modern drivers should wait when deserving drivers from previous years are still waiting for their calls.

Meanwhile, NASCAR fans are enjoying an era where multiple Cup drivers are putting up Hall-worthy numbers.

At the top of the list is Kyle Busch, whose 60 Cup wins to date and two championships alone would be more than enough, and coupled with 102 Xfinity and 61 Camping World Truck Series wins make his place all but unquestionable.

Kevin Harvick’s also a lock with 58 Cup wins and the 2014 title. He’s also got a slew of lower series wins in his back pocket.

Based solely on the numbers, Denny Hamlin, Brad Keselowski, Truex, Kurt Busch and Logano should also get the call. All have at least one title and a win count comparable to current Hall members.

And that’s not counting the younger drivers who don’t have the numbers yet but have years ahead of them, like Larson and  Elliott.

That’s the best of NASCAR: The great drivers of the past are still present in many ways, and the sport still has plenty of talent for the future. There’s always someone writing their legend.

When it first happened I thought it was a bit too hard but it could have been that Byron slowed up more than Logano expected because Byron looked really loose. But he did it a lap too soon because if Byron spun and brought out a caution before Logano got to the white flag it would have meant a GWC.

“Based solely on the numbers, Denny Hamlin, Brad Keselowski, Truex, Kurt Busch and Logano should also get the call. All have at least one title and a win count comparable to current Hall members.”

Last time I checked, Hamlin didn’t have a title.

Christopher
Reply to  Bill B

Sure he does: The Choker

Bill B
Reply to  Christopher