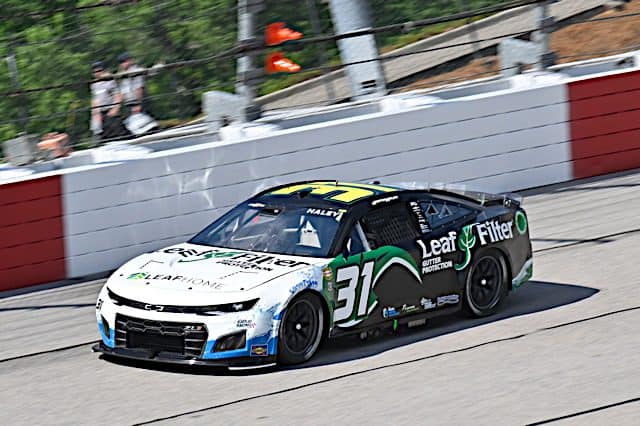 Justin Haley was 20th after the first stage of the Goodyear 400 at Darlington Raceway and 27th after stage 2.

When the checkered flag fell, he was third.

“It’s obviously a really strong day, this is a good run for us,” Haley said post-race. “We obviously did not have a third-place car, but [crew chief] Trent Owens and everyone on the [No.] 31 team just worked hard all day, obviously we got the free pass to start stage 3 and kind of were just building momentum.

“Had a good restart there at the end, so definitely a good run for our organization. It’s something we need, we’ve been clicking off top 15s and right around that area. Show we can kind of do it here, showcase my talent, so I’m super thankful for that.”

Haley cycled out to 18th after late green-flag pit stops, subsequently avoiding the Big One on the backstretch and making his way up to fourth with 10 laps remaining. He improved to third when contact between eventual winner Joey Logano and then-leader William Byron sent the No. 24 into the wall and back into the field.

“Obviously, it was key,” Haley said of track position. “I think we probably had a 20th-place car. I wasn’t very happy with it yesterday when we unloaded and qualified 29th, which is not good for anyone. Like I said, just a trying day, we kept working at it, kept our heads in the game and never lost sight.”

It’s the fourth consecutive result improvement for Haley, who’d reeled off finishes of 14th, 12th and 11th in the weeks leading up to Darlington.

“I wouldn’t even say we needed a top five,” Haley said. “I mean, I would’ve been happy with 10th. Last week, we had a really good race at Dover and we were up front, so we’re just kind of building momentum. Obviously, I don’t think we’re a third-place team, but I think we’re around a 15th-place team and 15th-place car any day of the week and can have a good race and end up front.

“We’ll just keep building — it’s a brand-new operation, right? This is its first year in existence, full-time, and this is my first full-time rookie season. Just a lot of boxes to check and stuff to figure out.”

Haley does have a Cup win under his belt, which came at a rained-out summer Daytona race in 2019.

“[…] It was a fluke deal,” he said. “I ran Xfinity a bunch, so this is my first full-time season, really, in Cup besides last year, so no. Every week, we’re just trying to get better and this is definitely one of those days where we take a large leap.”

He added a caveat about his 2019 victory, saying he wasn’t taking anything away from it.

“No, I’m not discounting it. I drove to third today, we drove, the team worked hard, and we made this setup call. It’s just a different feeling, like that win is the win, but this was a day where you had to keep your head in the game and avoid adversity.”

.@Justin_Haley_ and @C_Rice1 share a moment on pit road after Haley finished P3 at Darlington, his and @KauligRacing’s best result as a full-time #NASCAR Cup Series team.#Goodyear400 pic.twitter.com/1awHls3eCU

“He’s a hype man, but he’s a little much for me,” Haley said when asked about Rice. “I’m pretty reserved, but it’s great to have Chris around and obviously he’s a key part of the organization.”

Haley also had to avoid the fading Byron machine in the closing laps.

“No, I could kind of see them out there,” Haley said of the leaders. “I was just more worried about keeping the [No.] 24 where he was and he did a great job, William did. So hats off to him for kind of keeping it up and out of the way. It’s hard to do as a racecar driver, I just wanted to finish where I was. I wasn’t trying to get any more.

“[…] We were pretty conservative all day, fortunate enough to be kind of in good positions when the mayhem started.”

The third-place finish was the best for both Haley and Kaulig in full-time Cup competition.

“It’s just, the Cup Series is hard. Every week, you just have to find little things that you can improve on and be better on. […] I don’t think we had a third-place car, but we’re an organization that can have a good strategic day and get up front. It’s obviously huge, it’s pretty big for us.”

The early struggles were aplenty for Haley, but the team found speed as the afternoon wore into evening.

“I was really struggling in [turns] 3 and 4. These Next Gen cars, they’re really fast and got a lot of grip, until they don’t. They’re just super edgy. They’re edgy on adjustments too, you can be tight one run, make a small air pressure adjustment, be super loose. Just trying to keep all that in mind, obviously traction changing all day. Just happy to have a good day.”

“The most satisfying part is it is the hardest racetrack,” he added. “To get my career high best finish here, it’s pretty cool.”

Haley acknowledged that Kaulig is still establishing the foundation of their Cup team.

“We’re still in the very early stages of trying to build this Cup organization. It’d be hilarious to say we’d run third next week, it’s just kind of [being] a realist, right, and just keeping everything real. Like I said, we’ll keep clicking off the top-15s and get what we can get.”

Always happy to see a mid-pack team get a good finish, & this one should give them a lift.

One thing that’s been holding both Kaulig cars back has been performance on pit road. This week was a remarkable improvement for the 31.