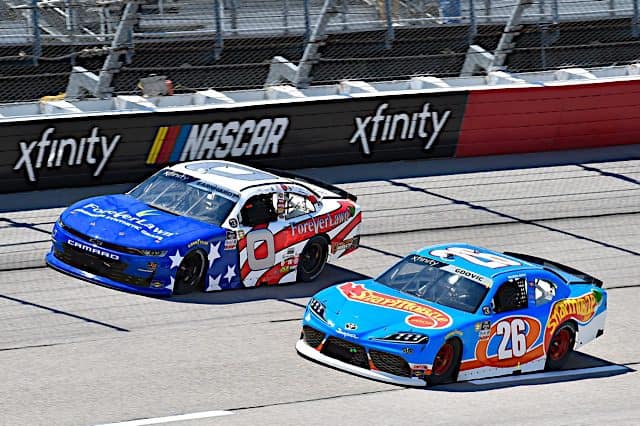 The second annual spring NASCAR throwback weekend at Darlington Raceway is upon us.

As usual, there’s plenty of interesting and deep-cut throwback schemes to go around, an impressive feat considering seven years’ worth of such liveries are under NASCAR’s belt and a lot of the go-to retro looks have already been done.

There’s plenty to get to, be it legendary paint jobs or under-the-radar gems, like a tweet that featured a Ryan Blaney mock-up with his dad’s black-and-green Jasper “Panther Power” car complete with the eye and mouth decals on the front, or Dale Earnhardt’s Peter Max scheme, one of the few Intimidator schemes that haven’t been done as of yet.

And there’s still some movie schemes left to replicate, like the No. 46 SuperFlo scheme from Days of Thunder that was run by James Davison at Road America in 2018. Every other main scheme from the film has been thrown back to at Darlington outside of that pink-and-white Cole Trickle machine.

With the numbers on the NASCAR Cup Series cars moved forward, there’s some throwbacks that miss, but some worked better than others. I’m structuring this as a primarily Cup-oriented list, but will mix in a NASCAR Xfinity and Camping World Truck series scheme or two to address all three series. Let’s kick things off on a high note with the best.

This was a toss-up between Harrison Burton and Chris Buescher, but I’ll give the edge to the younger Burton honoring his dad’s classic Exide scheme. Wood Brothers Racing perfectly replicated the lightning-bolt design as well as the pink-and-blue color palette, and also made use of the extra space with the DEX Imaging logo.

For our @TooToughToTame #Throwback we will rewind back to when Harrison was minus 8 days old when papa @JeffBurton last ran these colors in the great state of Martinsville. The year was 2000 and we had all barely survived Y2K. Close one. A neat @deximaging scheme fosho pic.twitter.com/L4l9HCbBb0

It’ll be hard to miss this one on track.

Both made flawless use of repurposing their designs, with Berry’s replacing the MLB All-Star Game scheme’s players with renderings of Earnhardt and Michael Waltrip celebrating the former’s Daytona victory and Allgaier’s subbing in the Good Humor Ice Cream mascot for the Tasmanian Devil, the friendly fellow exiting an ice cream cone rather than a mini tornado.

Jump to 2022, and JRM hit the nail on the head a second time. Berry’s car harkens back to Junior’s Looney Tunes car from 2003, replacing the brand’s characters with an anthropomorphic wheel on the hood, a cartoon hot-rod version of Berry on the driver’s side and a pit crew member on the passenger door.

It feels a little unfair to break the two Trackhouse schemes up, given they’re throwbacks to the same race, same family and even brought back the original sponsor, which earns them bonus points. Ross Chastain, a two-time winner so far this year, will pilot the Polar Bear scheme originally run by Earnhardt Jr., while Daniel Suarez runs the red scheme piloted by the elder Earnhardt in the same 1998 race.

That race was at Japan’s Twin Ring Motegi in 1998, where the two Earnhardts faced each other in an exhibition race. Junior ended up ninth and Senior 15th, the younger Earnhardt getting the better of his father. These two cars would look good even without the sponsor, but the fact that they brought back the original Coca-Cola to back the team for Darlington and nailed the polar bear design on Chastain’s No. 1 is incredible.

It seemed to take way too long for the No. 24 team to get around to this one once William Byron stepped into the Chevrolet.

It’s one of the most iconic schemes from the first decade of the 2000s, the car Jeff Gordon won the 2001 Cup championship with and one that stuck with the team for nearly 10 years. Variations of it came and went, but the blue-and-red DuPont flames is still one of the coolest to ever hit the track.

The number movement doesn’t hurt this throwback as much as some others and it’s listed as the 2007 version, though it could essentially represent any No. 24 primary from 2001-07.

Pretty much any Travis Pastrana throwback would make a top five list for Darlington weekend, be it his RFR Driven scheme from 2013 or this homage to his Boost Mobile machine for Michael Waltrip Racing in 2011, but Carson Hocevar is the first to pay tribute to a Pastrana livery.

hey, @TravisPastrana, what do you think? pic.twitter.com/xnJ5zsWZ5W

I fell in love with this one the moment it was revealed. The ghosted No. 1 in front of the No. 42 on the side, just as Pastrana did with the original No. 99 — a reference to his longtime No. 199 in motocross — is the best touch, while the subtle ghost designs throughout the scheme complete the ensemble. There’s the old PW (Pastrana-Waltrip) logo, a Vote for Pedro graphic in reference to the film Napoleon Dynamite and so much more contained within the scheme.

It may be on a different series machine than it was originally, but this might just be the best of the weekend.

Best of the best out of the way. Let’s get to the worst.

This was a toss-up between Kevin Harvick‘s kind-of throwback to his Rheem Breast Cancer Awareness car (great cause, not the best throwback) and Alex Bowman‘s Mark Martin tribute, and the No. 48 won out.

While Byron’s made it to the top five of this list and both Kyle Larson and Chase Elliott‘s are solid, Bowman’s was a bit puzzling on several levels. This Martin tribute has been executed before (and better) when Ryan Vargas ran a same-number homage in last year’s Xfinity event, Bowman’s really suffers from the number movement.

Moving it forward might not have been the deal-breaker, since the slanted number in white would’ve still looked decent, but changing the number color entirely on the doors and having it cross over three of the four design colors just does not sit right.

Things seemed to be going the right direction with the JGR crew, as a fan vote determined the M&Ms throwback for Kyle Busch‘s No. 18 between multiple choices (Ken Schrader‘s was a better choice than Ernie Irvan, but I digress).

However, in the week leading up to Darlington, the team unveiled the schemes for Denny Hamlin and Christopher Bell. Both harken to schemes that ran within the past seven years, the former to Hamlin’s 2016 Daytona 500-winning car. Scheme looks good and the number adjustment translates pretty well, but it doesn’t feel throwback-y enough.

🚨 THROWBACK 🚨 @ToyotaRacing is set to celebrate its 1,500th race in #NASCAR with special throwback schemes at @TooToughToTame to commemorate the milestone. @dennyhamlin will lead the campaign with a throwback to his 2016 #DAYTONA500 winning @FedEx livery. pic.twitter.com/ybGWPzQ3bX

The intent and execution of Bell and Hamlin’s schemes are understandable: significant moments in Toyota’s history, as the manufacturer’s 1,500th race in NASCAR will come at Darlington, and the fact that both FedEx and SiriusXM are still sponsoring make the cars easy to replicate.

In celebration of @ToyotaRacing's upcoming 1,500th #NASCAR race, @CBellRacing will run a @SIRIUSXM scheme from his 2017 championship-winning Truck season. pic.twitter.com/PRwQeQlT0W

But it feels like there should be a window of time that throwbacks should be older than, perhaps at least a decade. Hamlin could be running his starburst scheme from the early 2010s, Bell could perhaps run a scheme he ran as he worked his way up to NASCAR. It wouldn’t have to be throwbacks to themselves, but since that’s the way it’ll be this weekend, those come to mind.

This is a very cool scheme, but it’d be much cooler if it hadn’t been done each of the last two years, with Christian Eckes in 2020 and also with Chandler Smith last spring.

I — and a number of others — thought Austin Cindric‘s scheme was a throwback to Paul Menard’s No. 27 Quaker State Cup car from roughly a decade ago at first.

What is @TooToughToTame Throwback Weekend without a @RustyWallace #2 car in the field. Hard to find one that hasn't been done… but it's a match made in heaven with the @MenardsRacing colors 😎🔥@Team_Penske #NASCARThrowback pic.twitter.com/a8g0rmHYlB

Turns out, it’s actually a Rusty Wallace homage, replicating the design from his last ride in 2005. It’s unrecognizable, though, since the Menards colors remained unchanged and only the base template was utilized.

Nothing will likely ever outrun the No. 47 JTG Daugherty Racing entry’s bizarre kind-of-but-not-really throwback to Ricky Craven’s Tide car last year, where it was really only half a throwback, in the race for worst scheme execution, but there’s a couple for the 2022 event that don’t quite click.

I get all the fluff but it would be cool if all the sponsors would come back for one race. It would be cool to see dale Jerets UPS car again painted the same way with the logos but a different number. Or even the lowes 48.