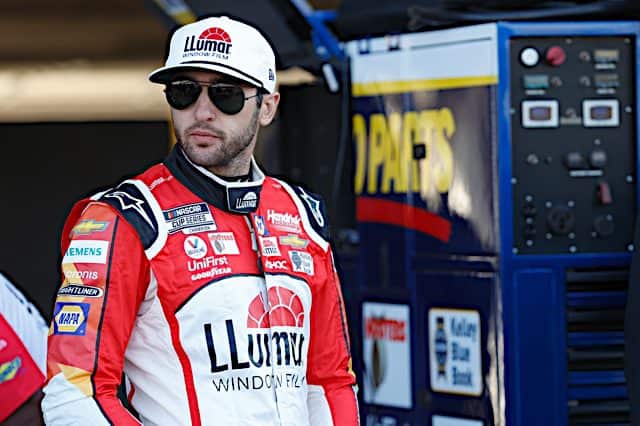 Is Chase Elliott in the driver’s seat for the regular season championship?

Chase Elliott won Monday’s (May 2) rain-delayed NASCAR Cup Series race at Dover Motor Speedway. In doing so, he broke a 26-race winless streak and recorded his first win on an oval since winning the Cup Series championship at Phoenix Raceway in 2020. The win also extended his lead in the point standings, as he now holds a 50-point advantage over second place Ryan Blaney.

With the regular season nearing its halfway point and almost a full-race lead in the standings, Elliott looks poised to win his first regular-season championship and the 15 playoff points that come along with it. However, there are months of racing to go, and there is still time for drivers to catch lightning in a bottle and go on a sustained hot streak.

For Elliott, his biggest strength in 2022 has been his consistency. In a season in which drivers have ranged from dominating one race to being a complete no-show in the next, Elliott has solidly been a top-10 car in almost every race, even if he isn’t contending for the win. Excluding the second race at Auto Club Speedway where he cut a tire while battling for the lead, Elliott’s worst finish so far in 2022 was a quiet 14th-place run at Richmond Raceway.

Until other drivers can consistently start running and finishing inside the top 10, Elliott will remain the points leader for the foreseeable future. And now that he finally has a win under his belt, Elliott and the No. 9 team will have extra confidence heading into the next few weeks of racing.

Should NASCAR abandon 3 p.m. ET starts and instead start as early as possible at tracks without lights?

For Sunday’s (May 1) race at Dover, the opening ceremonies began at 3 p.m. ET. These late starts have become more frequent in recent years, as NASCAR and the TV networks have looked to maximize viewership and TV ratings.

But when Mother Nature decides to interfere at track without lights, these late start times backfire in a hurry.

Racing was halted after 78 of the 400 scheduled laps on Sunday, and by the time the rain had let up, there was not enough daylight left to get all 400 laps in. Thus, the remaining 322 laps were postponed to Monday.

The race didn’t have to be delayed, though. The skies were clear in the hours before the race began, and an earlier start time would’ve given NASCAR and the networks enough time to complete the remaining laps after the rain delay if the race wasn’t already completed. An attempt to maximize viewership instead ended with a packed crowd seeing 19.5% of a race and a ratings disappointment on Monday.

This isn’t the first instance where rain and impending darkness have been problems due to late start times. Last year’s Cup race at New Hampshire Motor Speedway had a similar 3 p.m. ET start, and a caution for the lead cars crashing in the rain on lap 7 halted the race. The race was resumed and completed on the same day, but the late start time meant that the race had to be shortened by eight laps due to impending darkness.

Dover, New Hampshire, Pocono Raceway, Michigan International Speedway, Talladega Superspeedway and the road courses are the tracks without lights on the Cup schedule. The road courses can be run in the rain, so the five listed ovals have the biggest problems with weather delays and start times.

If it is possible to do so, what NASCAR and the TV networks should do at these five tracks is allow for flexible start times. If the radar is clear at these tracks in the days prior to the event, NASCAR can continue with the 3 p.m. ET starts as planned. But if there is a chance of rain in the afternoon of a race day, NASCAR should have the option to start these races earlier in order to get the full race in, as long as they change the start time with a few days’ notice.

There is nothing that can be done when it rains the entire day. But if there is a window of sunshine before a scheduled start time in a day filled with rain, there should be no reason not to use it.

He hasn’t picked up a win yet, but John Hunter Nemechek has now recorded three consecutive top five finishes in the Truck Series after the beginning the season with three straight finishes of 24th or worse.

Things have continued in the right direction for Nemechek and the No. 4 team, as they were running in second place for most of the final stage at the Bristol Motor Speedway dirt track before ending the night with a solid third-place finish.

The Truck Series now returns to Darlington Raceway, and although Nemechek hasn’t won at the track, he is arguably the best driver in the field there. In 2021, Nemechek led a race-high 65 laps before settling for an eighth-place finish after being collected in a 17-truck crash on a restart. In September, Nemechek was once again one of the fastest trucks in the field, as he led 39 laps and finished second behind a dominant Sheldon Creed.

With Creed having since graduated to the Xfinity Series, Nemechek now has the greatest resume at Darlington of all the Truck regulars entered for Friday’s (May 6) race.

Nemechek will be one of the favorites to win, especially since he has begun rattling off consistent finishes once again. However, he will also have a challenge in the form of Cup driver Ross Chastain. Chastain is also searching for his first win at Darlington, but he too has had great success at the track. He recorded a third-place finish in last year’s Southern 500, and he was two laps away from winning an Xfinity race at the track in 2020.

With Chastain driving for Niece Motorsports, Nemechek should be the favorite of the two. But as we’ve all seen, anything can happen at the track Too Tough to Tame.

What drivers currently in the playoff picture have been the biggest surprise in all three series?

In the Cup Series, the biggest surprise has easily been Chastain, who has won two races and is contending for five finishes almost every week. But despite the dramatic leap in performance, Chastain was at least expected to make the playoffs or contend for a playoff spot.

Of the drivers that are currently in the Cup playoff grid, Erik Jones has been the biggest surprise. In his first season in the No. 43 car last year, Jones recorded just six top-10 finishes and wasn’t even close to playoff contention with a 24th-place points finish. In 2022, Jones already has a top five and four top 10s in 11 races, and he was a serious contender to win in the races at Auto Club and Talladega.

With 15 races to go, Jones finds himself three points above the cut line. Even if he doesn’t keep this pace up, 2022 has already been a nice bounce back year after a disappointing 2021.

Ryan Sieg and RSS Racing switched to Ford in the Xfinity Series for 2021 with the hopes that it would improve their performance. Last season had its growing pains, as Sieg missed the playoffs while recording just two top-five finishes and seven top 10s with an average finish of 18.6 in 33 races.

It’s just 10 races into the 2022 Xfinity season, and Sieg has just about equaled all of his stats from last year. He has one top five and seven top 10s in 10 races, all while sporting an average finish of 11.8. With all these improvements, Sieg comfortably sits eighth in points with a 45-point cushion above the cutline. The switch to Ford has clearly paid off, and Sieg is now enjoying one of the best seasons of his career.

For the Truck Series, Tanner Gray showed promise in his 2020 rookie season before a sophomore slump in 2021. In 2021, he had just two top 10s, an average finish of 22nd and an 18th-place points finish. Six races into 2022, Gray now sits eighth in points with top 10s in half the races. In addition, his average finish has been cut in half from 22nd to 11th.

Gray currently has a 26-point playoff cushion, but he is looking for a string of good results after subpar finishes in the last three races. But with the recent struggles withstanding, Gray and the No. 15 team already look to be much better than they were a year ago.

Two things: watch that big thumb that ends up on the scales to see who NASCAR deems to be the next champ.
Races EXCEPT on the West Coast should start at 1 PM Eastern except for the Coke 600 and limit the number of night races. The regular-season end at Daytona should begin at Noon. Unless they can change late-afternoon rain.
Of course, the leadership at NASCAR looks like an extras cast-call for the sequel to “Revenge of the Nerds.”

The current “leadership” at NA$CAR should have the starring roles in the remake of “Dumb AND Dumber And Dumbest And More Dumbest And Most Dumbest.”