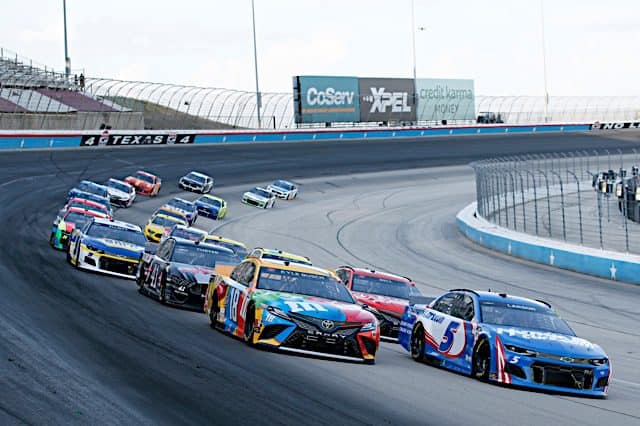 Another year, another All-Star Race format that takes 10 minutes to understand. What should be done with the event to bring it back to its glory and intrigue of 20-30 years ago? – R.J. P, Destin, Fla.

Oh, it’s almost May already? That means it’s time to have the annual discussion surrounding the All-Star Race — or what’s left of it, anyways.

Look: the race has no place in the NASCAR Cup Series anymore. Do I like that I feel that way? No. Do I believe it? Yes.

The formats have become too confusing, convoluted and the racing hasn’t been conducive to a fun, easygoing-yet-important event. It hasn’t felt like the All-Star Race for some time now. And there’s no one reason as to why.

It’s not ISC, SMI, NASCAR or the drivers’ faults. It’s just a combination of bad ingredients that have made a bad meal.

With no disrespect to the fine folks at Texas Motor Speedway, holding the event there is just … not doing it any favors. This year’s format is equally as long as 500-mile races at TMS feel.

I’m not proposing a solution, because I don’t have one. But I’m asking a philosophical question. Do we need an All-Star Race anymore?

I lean toward no. The Clash has more of that one-event-a-year feel. But given that it’s only been a year since that race has been transformed into a stadium race, combine the two.

Make it the season-opener exhibition with $1 million on the line, if you still want a big payday as part of the show. But some sort of life needs to be injected into the event in some form or fashion.

Everybody is trying their best, but unfortunately it seems to be dying — if not already dead. If so, let it be. Give the teams another off weekend, have SMI deal with losing a date (much easier said than done) and move on.

Want to revisit the All-Star Race down the road in a few years? By all means, go ahead. But for the immediate future, the event doesn’t have a place in the sport.

With the NFL Draft upon us, who would your top four overall picks be (NASCAR Cup Series drivers excluded) if you had the choice of any drivers? – Joe H., Birmingham, Ala.

Ah, draft day. I always kind of wished NASCAR adopted some form of trade aspect to the sport, but it’d be entirely too difficult considering how contracts are structured, manufacturer deals, sponsorship, B2B deals, etc.

But we can play along, can’t we? Here are my top four drivers I’d choose to start a race team right now (Cup excluded):

Yes, everybody’s favorite villain is my No. 1 pick. Despite the fact that Ty Gibbs is clearly driving the best of the best equipment and has pretty much his entire career, there’s no denying the kid’s talent.

He wins. A lot. And he’ll continue to do so when he gets to the Cup level, too. It’ll take longer than it did in the NASCAR Xfinity Series (hell, the guy won in his first start. Of course it’ll take longer), but given his body of work and winning percentage right now, it’d be crazy to think Gibbs won’t take to the Cup Series quickly.

Areas of improvement for Gibbs are much needed, notably how he handles taking it after giving it (see: Martinsville Speedway with Sam Mayer) and dealing with criticism. But for a teenager who has the fame and pressure of a Hall of Fame last name, Ty Gibbs ain’t doing too bad.

It’s a bit strange to have a former Cup driver this high on the list. One would think if a driver was in Cup, and now isn’t, that’s for a reason, right?

Sure. In John Hunter Nemechek‘s case, that reason was simple: winning.

The 24-year-old made the move on his own to go down not one but two series and has won at a high clip since making the move. No championship to show for it, but we understand how the title race works these days.

Bottom line is Nemechek has it. Even with his limited Xfinity starts, be it with Joe Gibbs Racing (with whom he’s visited victory lane multiple times) or upstart Sam Hunt Racing. He’s thrived with high expectations at Kyle Busch Motorsports in the NASCAR Camping World Truck Series and continues to prove his worth at the Xfinity level, making him a can’t-miss prospect for Cup owners moving forward.

See also
Did You Notice?: Better to Be a NASCAR Minor League Champion Than Failed Prospect?

Mullet or no mullet, Noah Gragson is a proven, marketable, aggressively respectful driver, which earns him a spot on my list. Not to mention he’s in his fourth full-time Xfinity Series and has some Cup starts under his belt.

JR Motorsports is a top-tier team, and Gragson has performed up to JRM’s standards. But he hasn’t quite dominated the way Gibbs and Nemechek have in their respective series, hence his spot below them on this list.

But for any Cup teams looking for a young, proven and hungry driver, Gragson is a slam dunk of a choice. He’s polarizing for the fan base in a sense but attracts a younger audience and has proven his development of sponsors is as important to him as his race craft. That’s valuable in many ways.

Three Truck wins only begin to tell the story of Chandler Smith behind the wheel of a racecar.

The Georgia standout has had success at every level, including tearing up the late model scene (and continuing to do so). Similar to Nemechek at KBM, the high expectations have not been an issue for Smith. They were for the likes of Harrison Burton, Todd Gilliland and even Gragson.

Only 19 years old and recently having made his Xfinity debut at Talladega Superspeedway, there’s much more for Smith left to accomplish. But seeing what he’s already put on his resume and who he’s done it against, it wouldn’t shock me to see him climb the ranks rather quickly through the Toyota pipeline.

Lots of time for commercials in the “All-Star” event.

Have qualifying and run the 50 lap qualifier. Take the top 25 cars. Run the 125 laps straight through as an Australian Pursuit. The last place car is eliminated every 5 laps. until 20 to go. Caution laps don’t count.

They are dooming the AS race to failure by running it on Sunday night instead of Saturday night.

HEY!
Idiots in charge.
Don’t you realize people have to work the next day. No one is going to lose sleep for the stupid exhibition race. Or do you just have that little respect for your fans that you don’t care?

Keep this on the down-low, but an exhibition race would be perfect for a figure-8 on dirt, ran on a Sunday night with green flag around 12:01 am, right after the national anthem plays and the screen turns into colored bars! lol

Damn, I’d have to lose sleep because I wouldn’t want to miss that.

Maybe if all the others races didn’t have stages, it would feel more “special” IMO

They play follow the leader.
It has been dull since the 1990s. Drop it. Also a great opportunity to give both Texas dates to no one. Have a couple breaks in the schedule.