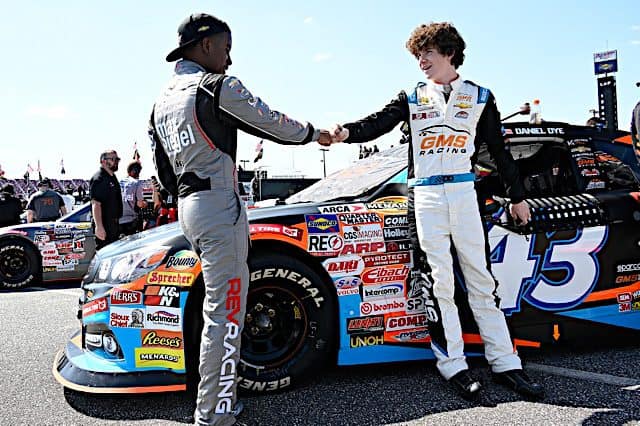 The 2021 ARCA Menards Series championship was a hard-fought battle between talented young drivers Ty Gibbs and Corey Heim. On the strength of his 10 wins, Gibbs won the title. This year, there is no clear-cut favorite.

The first three races of this season have featured three different winners. Heim dominated the Lucas Oil 200 at Daytona International Speedway, followed by Taylor Gray winning the General Tire 150 at Phoenix Raceway. Nick Sanchez then captured his second career ARCA win at Talladega Superspeedway after the race ended prematurely due to time restraints.

Sanchez’s victory marked the first win by a full-time ARCA competitor. Despite leaving the 2.66-mile superspeedway with the trophy, Sanchez is not the points leader. Yes, this ARCA championship will be akin to the wild west as it will go down to the season finale at Toledo Speedway with several drivers vying for the title.

Heim winning the opening race at Daytona and Gray winning in Phoenix put a wrinkle in the title race to begin the season. Heim is sharing the No. 20 Venturini Motorsports Toyota with Jesse Love and while the No. 20 itself is running a full-time schedule, neither driver is competing for the championship. Both drivers already have one main ARCA win in their respective careers, and both want more victories.

In the races he competes this season, Andy Jankowiak is confident he can win them.

See also
Andy Jankowiak On His Time in ARCA

All these talented part-time drivers could very well be outside factors making the points race close between several drivers by sneaking a few wins between them this season.

Rajah Caruth, Sanchez’s Rev Racing teammate, took over the points lead from Daniel Dye after Talladega. Dye nearly retained it, leading the race, yet his spin ultimately brought out the race-ending caution. Caruth finished sixth whereas Dye fell back to a 17th-place finish.

After winning the 2021 season finale at Kansas Speedway, Sanchez now has the win at Talladega and only trails Caruth by four points. He is the second-most experienced full-time competitor, so Sanchez definitely has an advantage as they battle for wins. He already made his mother happy with his Talladega victory.

Dye won at Berlin Raceway last year and has led the most laps of the full-time ARCA drivers. But his quest for the ARCA title is now in jeopardy. ARCA suspended Dye indefinitely following his arrest on April 26. Although the legal process takes precedence, the uncertainty of Dye’s future leaves GMS Racing’s bid for a driver championship in doubt.

Of the other full-time drivers, neither Amber Balcaen nor Toni Breidinger have led laps in their ARCA careers. Both women race for good teams though. Balcaen drives for Rette Jones Racing, which won the 2021 ARCA East season opener as well as guided Landen Lewis to victory in the ARCA race last year at the DuQuoin State Fairgrounds.

Breidinger isn’t a clear-cut driver to win the title, but she has shown improvement and sits sixth in points. Having some solid races and winning of course will help her chances, especially if those ahead of her start to struggle. Racing for Venturini Motorsports doesn’t hurt either, being in one of the best rides in the series.

Greg Van Alst made the jump to full-time status within the ARCA garage. The 40-year-old hasn’t won yet, but he’s in a good position to do so. Van Alst upgraded his equipment over the offseason. He snagged a runner-up finish last year at Winchester Speedway, so he knows how to run up front. Van Alst began this year with two lousy finishes, but he rebounded to an 11th-place finish at Talladega.

Van Alst is one of two series regulars currently outside the top 10 in points. He is in 13th place.

Who is the other one outside the top 10? It’s 68-year-old Brad Smith. He has 388 starts under his belt, an admirable accomplishment.

Last year, Heim and Gibbs dueled for the title. This year, Caruth leads Dye, Sanchez, Breidinger, Balcaen, Van Alst, and Brad Smith. But with other talented part-time drivers, Dye’s unclear future, and Sanchez leading the pack with two career ARCA victories, each ARCA race, and every position, matters this season.

ARCA drivers will next hit the track on Saturday, May 14 at Kansas Speedway. They’ll race in the Dutch Boy 150 at 2 p.m. ET with TV coverage provided by FOX Sports 1.

Good article, Heim and Love are in the 20 Venturini car. Tony is in the 25.

Thanks for pointing out that mistake. Frontstretch corrected the article.