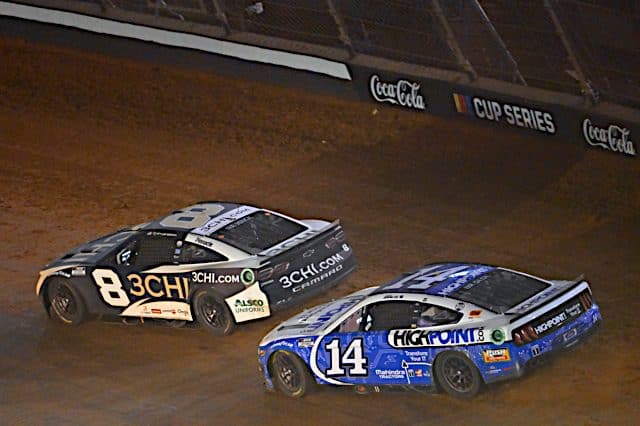 TALLADEGA, Ala. – The first question asked of Richard Childress Racing’s Tyler Reddick at his hauler Saturday (April 23) at Talladega Superspeedway was very simple.

How tired was he from talking about what happened 340 miles away and six days earlier on a dirt-covered Bristol Motor Speedway?

“I mean, I’m not tired about talking about it, I just give the same answers,” Reddick told Frontstretch. “I don’t know. I guess people aren’t tired of asking me about it.”

A couple of hours earlier, before he qualified 10th for Sunday’s GEICO 500 at Talladega, Reddick was the first Cup driver to arrive in the track’s media center for the qualifying media bullpen.

The first question, then the second, the third and so on, were about one topic: his reaction – or lack of a reaction – to Chase Briscoe‘s last-lap dive bomb on Reddick in an effort to win the second Bristol dirt race.

That effort resulted in both drivers spinning out and Kyle Busch swooping in to win. Afterward, when Briscoe approached him on pit road to apologize, to the surprise of many, Reddick graciously accepted and chatted with his fellow dirt racer.

It was oddly notable that at Bristol, of all tracks, a last-lap pass gone bad resulted in civility rather than crosswords.

But this wasn’t normal Bristol. It was Bristol dirt.

“I look from it more like a dirt racing perspective than asphalt,” Reddick said in the media center. “When you run asphalt, you can kind of make somewhat slide jobs work at some racetracks that we have that are more wore out. But they’re pretty obvious, you can kind of see them coming. On dirt, you can be more aggressive with your moves just because you may have a little bit less grip, you can be more aggressive with driving into the corner, sliding up the hill, that sort of thing.”

Later in his hauler, Frontstretch pressed Reddick on another aspect of the incident.

If anyone other than Briscoe attempted that same maneuver with the same result, would he still have reacted the way he did?

After taking a moment, Reddick answered. “I genuinely don’t think there’s many other drivers in the field that could have done what he did.

“I think of Kyle Larson, I think of Christopher Bell. A couple of other dirt guys out there. I’ll just say Christopher, or Kyle, for example, or even Alex (Bowman), with his dirt racing background did the same thing, I’d feel the same way about it. I just don’t think a dirt guy, or even an asphalt driver would even attempt to make that move. They never grew up having to make those moves.”

But again, it was on Bristol dirt.

“Now if anyone did it to me on asphalt, I’d be upset,” Reddick said. “Asphalt, concrete, totally different story. Because it was dirt racing, that’s where I feel like the line in the sand is in a different place.”

There’s probably another reason why Reddick’s atypical response was so noteworthy.

The third-year Cup driver was two turns away from the first win of his NASCAR Cup career, which is now 83 races old.

Reddick, who has two Xfinity Series titles, has had to watch a growing list of drivers earn their first Cup win since he made his full-time debut in 2020: Cole Custer, Bell, Michael McDowell, Bubba Wallace and, just this year alone, Austin Cindric, Briscoe and Ross Chastain.

Reddick has nine top fives in that time, including four runner-up finishes.

This year, he has led 90 or more laps twice, at Auto Club Speedway and Bristol, without winning.

Who wouldn’t want to fly off the handle after what happened to Reddick last weekend?

Instead, he remains patient and focused, still confident the hard work will pay off. What will it mean to the 26-year-old when his maiden trip to Cup victory lane finally occurs?

As he answered, Reddick looked toward the front of hauler, where crew chief Tyler Burnett and other team members prepared for Sunday’s race.

“It means something different to each of us on the team, but that’s what drives us,” Reddick said. “It would be huge, because there’s just a lot of people that put a lot of their lives, some of us our whole lives [into racing]. It’d be nice to get that win and get that payout.”

This guy is really impressing me with both his driving skills and his sportsmanship and maturity.