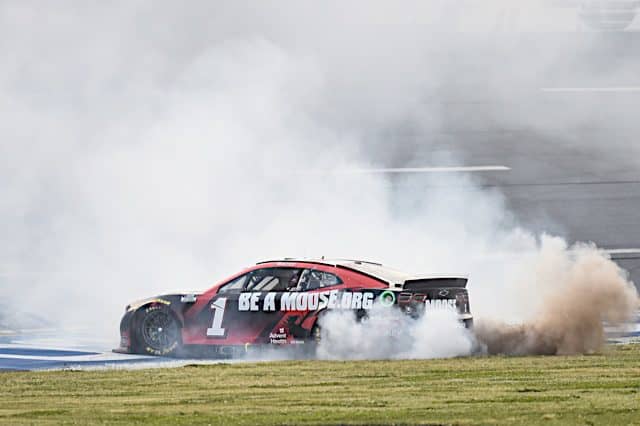 Ross Chastain is known as one of the sport’s more aggressive drivers. But in earning his second win of the year in Sunday’s (April 24) NASCAR Cup Series GEICO 500, Chastain perfected a new skill in his continued racing development.

Chastain spent the final laps of the Talladega Superspeedway event as the third driver in line on the inside row, biding time to make a last-lap move. When leader Erik Jones opened up too large of a gap, Chastain gave Kyle Larson a huge push toward the front.

The momentum for Larson threw him up on the high line. That’s where Jones threw a block, running Larson further up the track, and Chastain kept the wheel straight as chaos commenced around him. The eighth-generation watermelon farmer led only the final lap en route to scoring the second NASCAR Cup Series win of his career and becoming only the second multi-time winner of 2022.

Watermelons everywhere (and the competition) should be really worried about @RossChastain and @TeamTrackhouse this season. pic.twitter.com/yCBgTXJZqp

After finishing runner-up at Atlanta Motor Speedway from a similar position, Chastain changed his approach in the final laps of this one, telling FOX reporter Regan Smith, “Holy cow. I’m always the one going to the top too early and making the mistake. There at the end, it was like eight to go, and I was like, I’m not going up there again, I did that a couple times today. I’m just riding the bottom, if it works. . . I’m not gonna lose the race for us.”

He continued, almost incredulous, “They just kept moving out of the way.”

Austin Dillon emerged from the chaos to finish second, with Kyle Busch third and Larson scoring the first superspeedway top five of his career (30 starts). Martin Truex Jr. rounded out the top five, with Jones having to settle for sixth after leading 25 laps on the day. Chase Elliott, Michael McDowell, Alex Bowman and Kevin Harvick completed the top 10.

Despite an early scare for mid-pack contact between Joey Logano and Jones, stage one stayed calm and caution-free almost in its entirety. With a handful of laps left, Bubba Wallace led the outside line to the front. On lap 56, Daniel Hemric’s engine failed in the middle of the pack, sending the No. 16 Kaulig Racing Chevy spinning up the turn 3 banking into the path of Chris Buescher and Chase Briscoe, eliminating all three from the event.

NASCAR determined that the No. 23 was ahead at the moment of caution, and Wallace scored his first stage win of the season and third of his career.

The cautions came quicker in stage two, including a nine-car crash on a restart triggered by contact between Jones, Logano and Wallace that collected Daniel Suarez, Ricky Stenhouse Jr. and Austin Cindric, among others.

Ride with @joeylogano as the No. 22 gets caught up in this multi-car incident at @TALLADEGA. pic.twitter.com/pfGgf2iumt

“I felt a lot of things that didn’t feel good, I will tell you that much,” Logano said. “The car got banged up pretty good there… It’s superspeedway racing. Every time we come to one of these things, cars crash… they suck.”

The incident also eliminated Ricky Stenhouse Jr., Ty Dillon and Daniel Suarez, thinning the field to about a 25-car lead draft. The story of the stage then became the four-car blockade of Hendrick Motorsports, who lined up on the inside and dominated. William Byron won stage two from his teammates Elliott and Larson for his third stage win of 2022.

But the Hendrick foursome got split up during pit stops before the final stage and never again found themselves all together in the pack. Instead, Ryan Blaney and Bubba Wallace worked their way to the front until the final series of green-flags stops left them, too, shuffled back in the pack.

Wallace wound up slamming the outside wall in the final lap as he and 23XI Racing teammate Kurt Busch both lost control within a series of desperation moves. Aggressive racing masked criticism from drivers throughout the day that passing was difficult.

“It was just hard to pass all day,” said third-place Busch. “Really there, at the end if two lanes were formed and they were pushing, there wasn’t really enough for a third lane to form to get any speed going.”

Chastain still found a way to make it happen, the second victory for Trackhouse Racing Team in 56 starts on the NASCAR Cup circuit.

“We’re all doing a good job of how we manage the highs and the lows,” said Trackhouse owner Justin Marks. “I don’t think we get that low, and we don’t get that high. Today is fun. But this week we’ll be focused on Dover, know that’s an entirely different challenge again.”

Speaking of the Monster Mile, Sunday (May 1) the Cup Series makes its sole annual trip to the state of Delaware for a 400-mile race at Dover Motor Speedway. The DuraMAX Drydene 400 will be televised at 3 p.m. ET on FOX Sports 1.

“NASCAR determined that the No. 23 was ahead at the moment of caution”

Because he pulled ahead as the caution lights were on. Rent free.

Larson was ahead when the cars started spinning. He slowed for the caution lights and Bubba didn’t and NA$CAR breathed a sigh of relief.

Well of course not, he is the face of NASCAR.

You really can’t blame anybody for that, it was a Martinsville style stackup at Talladega. Everybody was into everybody. Bubba maybe could’ve slowed up quickly but he would risk getting hit from behind.

Everybody wasn’t into everybody right then. Watch it again without the rose colored glasses on. Bubba flat out turned Joey. Remember this, Joey ALWAYS gets even.