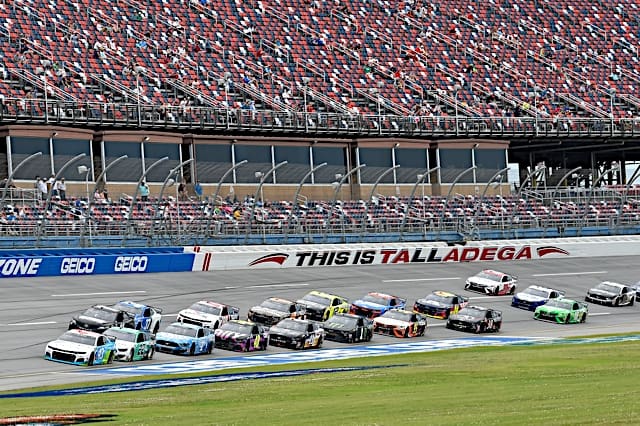 When NASCAR heads to Talladega Superspeedway these days, fans know what to expect.

It may not play out exactly the same each time, but call it variations on a theme: after the initial jockeying for position at the green flag (and now, the subsequent guaranteed restarts at the stage breaks), the field settles in with varying strategies for roughly 90% of the race, and then chaos happens when the checkered flag nears. Somewhere in there are a couple of multi-car crashes, sometimes massive ones involving 12 cars or more, and one of those is usually in the closing laps.

But it wasn’t always that way.

Plates became A Thing in 1988 at Daytona and Talladega after drivers were topping out at speeds in excess of 212 miles per hour. They worked by creating a smaller space between the carburetor and intake manifold, restricting air to the engine. Less air equals less combustion, and so, less horsepower, slowing the cars down.

In the 1987 Winston 500, future Hall of Famer Bobby Allison got sideways, got airborne, and tore into the catchfence along the frontstretch. Allison walked away, but when the dust cleared, it was painfully obvious how close he’d come to going through that fence into the crowd and to hitting the flag stand.

This well-titled video shows in detail how close to disaster this race came.

While racing in itself is dangerous, it’s universally accepted that risk shouldn’t extend to fans. That incident did lead to sturdier fences at the track, but it also led to restrictor plates, which would change the face of racing at the superspeedways.

Speeds had been creeping up for years, and a change was needed for safety.

Fifteen years into the plate experience, Rusty Wallace ran a radio test at Talladega during which NASCAR allowed a little experiment: they let Wallace’s team take the plate off. Wallace ran a lap of over 216 miles per hour, with a top speed of 228.

He said afterwards that he could have easily topped 230.

That’s too fast. Despite NASCAR’s efforts to keep cars on the ground at all times, the faster they go, the harder that is, especially when they get turned. Roof flaps have helped, but they’re ineffective at those speeds. Restrictor plates were replaced by tapered spacers in 2019, a similar part that allows for slightly more throttle response but still restricts airflow to the engine.

There’s the “why” of it all, in a nutshell. As for how plates affected the racing, well, that’s an eye-opener, too.

There were 36 Cup races at Talladega between the inaugural event 1969 and that fateful race in 1987.

More than 10 cars on the lead lap was a rarity; that happened only twice.

In fact, there were five or more cars on the lead lap at the checkers only 12 times in the before plate times, barely a third of the races. Prior to 1977, there were zero races with five or more lead-lap finishers.

Margin of victory was generally larger in those first 36 races. The official call in the ’74 Talladega 500, in which Richard Petty was the victor, was a mere two feet (many races in the early days have the margin listed in feet or car-lengths rather than time) over runner-up Allison. In contrast, two races had a margin of over a lap, with the largest listed as one lap plus 50 seconds. Those are extremes, but it was common for the margin to be listed in whole seconds. Just one race was listed as finishing under caution.

Then the plates came, and things changed. In the 68 Talladega races, beginning with the 1988 Winston 500 (the fall 1987 race was run unrestricted but with a smaller engine due to Allison’s accident), just 10 have had fewer than 15 cars on the lead lap at the finish (in one, the fall race in 2017, just 14 cars finished the race, with a dozen still on the lead lap).

In the most recent Talladega race, 31 cars were still on that lead lap at the end.

And as the number of cars on the lead lap has risen, the margin of victory has dropped. Since 1998, just four races have featured a margin of .2 seconds or greater. The closest finish in that time was .002 seconds between Jimmie Johnson and Clint Bowyer in the 2011 fall race, which translates into inches on the track. (Incidentally, Johnson’s win kept Bowyer from winning three in a row at Talladega as Bowyer bookended that runner-up finish with a pair of victories).

Surprisingly, the attrition rate isn’t wildly different in the plate era. Talladega has often produced a long list in the DNF column. What is different is the reason for cars’ failures to finish. These days, crashes account for the vast majority of early exits, but in Talladega’s early days, mechanical issues contributed to the numbers on a regular basis. NASCAR’s tightened rules coupled with teams building more durable cars and engines has changed that considerably, while the bigger crashes have kept attrition rates at superspeedways higher than most other tracks.

There’s no doubt that it’s necessary to keep speeds at Talladega and its sister track, Daytona International Speedway, lower than they would be if power wasn’t restricted. Even before Allison’s accident, speeds had been creeping up to where drivers were uncomfortable and the likelihood of cars getting airborne was increasing. And while catch fencing at those tracks has improved since 1987, cars have still torn into it and fans been injured. Increasing the likelihood of airborne cars isn’t an option for the safety of both drivers and fans.

Some fans love it, some hate it, but restrictor plates changed the game at Talladega and Daytona. The number of lead-lap finishers has grown while the margin of victory has decreased. There’s a different type of skill involved in superspeedway racing today than there was, and as the cars have evolved, the packs have only gotten bigger and tighter. Hang onto your hats. It’s still a wild ride.

The early carnage usually comes from the middle of the pack, on back. That’s why teams sometimes just rode around at the back as long as there were enough of them to stay on the lead lap. That’s mostly fallen out of favor.

While the guaranteed last lap madness is at the front. Either way it costs owners hundreds of thousands in torn up cars.

Now with the parts shortages the costs could be even higher.

NASCAR won’t do anything to change things because it’s good for ratings, & the owners bare the brunt.