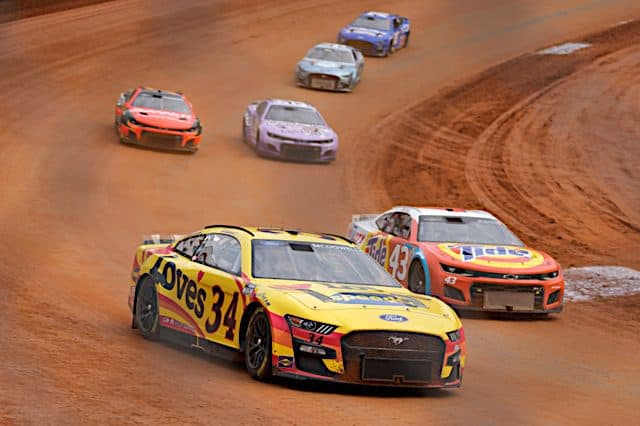 For just the 12th time in NASCAR Cup Series history, the premier level cranked the engines on Easter Sunday. It was the first Easter race since 1989, and NASCAR included a special service beforehand in recognition.

Michael McDowell capped off the holiday with a top-10 finish on the dirt. McDowell had a strong car all race and was able to avoid the calamity to grab a well-deserved result. Two interruptions in the action for rain added an extra flare of intrigue to the race, as McDowell held tough through the challenge.

During one break for the rain pause, McDowell was interviewed by FOX Sports. The Phoenix, Ariz. native told FOX Sports that he was a novice on dirt, responding to the idea that many viewed him as a road course ace. However, his crew chief Blake Harris does have ties to dirt racing in his roots. Those notes were valuable to the success of the No. 34 team, giving McDowell his second top-12 finish at the slip n’ slide track.

McDowell started the race in 17th after earning seven passing points in his heat race. If you go through a normal Bristol race without many bumps or bruises, you’ve had a pretty successful race. But that honor goes up a level if you can do it on the dirt surface of the Last Great Colosseum. McDowell did just that, keeping his car clean throughout the event. After finishing stage one in 15th, McDowell earned stage points in stage two with an eight-place result.

Despite both the delays for rain, McDowell was able to keep his car on the tightrope through slick conditions as others had their hands full. The 37-year-old sealed the deal to finish in ninth place.

It was a much needed finish for McDowell. A year ago, his team was able to relax and prepare for the playoffs following McDowell’s victory in the Daytona 500. This year, McDowell does not have that luxury. A top 10 in the Daytona 500 was followed by finishes of 24th or worse in six of the previous seven races.

Like many smaller teams, the No. 34 team will have the next race circled on the calendar when the series heads to Talladega Superspeedway. Superspeedway racing is right up McDowell’s alley, as he also finished third at the Talladega spring race a year ago.

McDowell was not the lone dog in the top 10. Ty Dillon had a strong weekend all around, arguably his best weekend of the season. Dillon plausibly had the most difficult heat race on Saturday, facing three Hendrick drivers and dirt ace Ricky Stenhouse Jr. Dillon started on the outside of Chase Elliott and immediately took the lead, holding serve throughout the whole race.

Dillon started the race from the seventh position and was impressive from the green flag. Stage one was particularly stellar for the younger Dillon brother, as he drove up into the top five on lap 10. He kept climbing from there to finish in second to none other than dirt ace Kyle Larson. The Welcome, N.C. native faded a bit outside of the top 10, but was able to hold it inside the front half of the field. The unpredictability of the rain and track conditions played to the No. 42 driver’s favor. With 16 laps to go, Dillon re-entered the top 10, engaging in a battle with McDowell for the spot. When Chase Briscoe spun while going for the lead, it was enough for Dillon to sneak by and earn his first top 10 with Petty GMS Motorsports. It was also his second career top 10 on a non-superspeedway.

Daniel Suarez was a sleeper entering the race, but he dismissed any doubters during the race. This race a year ago showed how much potential Trackhouse had when Suarez led 58 laps and finished in fourth. He flexed his muscles once again this go around. Both Suarez and teammate Ross Chastain stayed out at the end of stage one. With rain in the area and the tire game contrasting largely from concrete, Suarez took a chance to steal the win. However, he may have had the speed to do the same. Suarez outdid his 2021 performance at the front of the field, leading a career-high 64 laps, holding off tough challenges before finally surrendering the lead on lap 140 to Briscoe.

Suarez was forced to pit at the end of the stage when the rain hit. When the race restarted, Suarez was involved in an incident involving Cody Ware, Chase Elliott and Stenhouse, though he suffered minimal damage. He would recover to drive back up through the field and earn a solid 12th-place result.

Several drivers in the field had roots in dirt racing, with one of those being Justin Haley. Haley also won his heat race on Saturday and started the race from the sixth position. Haley ran inside the top 10 for most of stage one before fading back to 14th. The No. 31 struggled with forward drive during the event, as well as being stuck on the bottom lane for numerous restarts. Haley re-entered the top 10 in the final stage, but fell back outside of it as the run went on. Ultimately, the 22-year-old dodged numerous incidents to earn a respectable 14th-place finish in his first Cup dirt race.

Todd Gilliland is the most inexperienced of this season’s Cup rookies, and he has the least formidable equipment among the three. Opinions will vary, but Gilliland has made a case for being the most impressive rookie at times. He showed a lot of speed during the Bristol weekend, landing in the top 10 in both practice sessions. Gilliland struggled with track position for most of the race, worsening when he spun shortly after the final stage commenced. However, the rookie recovered to finish in 17th in his Cup dirt debut. Gilliland’s four top-20 finishes nearly match Anthony Alfredo’s five in the same ride a year ago, and he is on pace to best Alfredo’s average finish by four spots.

Corey LaJoie spun twice during the race, including one that sent Kevin Harvick into Noah Gragson, resulting in Gragson’s car getting airborne. However, LaJoie was able to recover to salvage a 19th-place result. The Spire Motorsports driver appeared to be in the middle of several incidents throughout the night, having to needle his way through to avoid contact. The finish marked LaJoie’s fourth top 20 of the year.

Another notable finish came from Josh Williams. Williams made his Cup debut for Live Fast Motorsports after making 131 NASCAR Xfinity Series starts. Williams was able to stay clean throughout the event and earn a solid 25th-place finish.

Michael McDowell (ninth): “For not being a driver with a dirt racing background, a top 10 at the end of this race is amazing. We had an amazing car that handled great all weekend, and we made the most of it. We finally had a race come our way, so I’m excited to get this after the last three races we have had.”

Ty Dillon (10th): “I was pretty happy with our Food City/Gain Camaro. It was fast from the moment we unloaded on Friday. We got stuck on the bottom on every restart after the first stage, and you just couldn’t get through the field on the bottom. I had a blast, though. Dirt racing is fun for me. My roots are dirt racing, so while I haven’t ran a dirt race in about five years, I felt back at home and had a lot of fun. Winning the heat race on Saturday in Lee Petty’s number on dirt, just felt right. I can’t thank Maury Gallagher and Petty GMS for the opportunity. To win our heat race, finish second in the first stage, and bring home our first top 10 this season makes a great weekend for our No. 42 team.”

Justin Haley (14th): “Not the day we wanted in our No. 31 LeafFilter Gutter Protection Camaro ZL1, but we got a good top 15 out of it. I led the team in the wrong direction for changes and got myself behind a little. Overall, it was a productive weekend. We got a heat race win and ran up front during stage one. I just backed myself into a corner, but I’m proud of this team’s effort.”

Todd Gilliland (17th): “Dirt track racing is something that has always been a fun challenge to me. I was really happy with the work the No. 38 First Phase Credit Card team put in to give me the opportunity to have a great day. We were able to climb back up through those final restarts and ended with a solid finish.”

Erik Jones (24th): “Tonight was an up and down one for our Petty GMS team. We made our way forward and then we fell back. The nose was torn off of our Food City/Tide Chevrolet before the last red flag, so we were worrying about getting mud in the radiator. Dave (Elenz, crew chief) and I aren’t dirt guys, so we were learning as the race went on. Just tried to make up as many spots as we could in the final laps. We will move on and focus on Talladega next week.”

Noah Gragson (27th): “We were trying to keep our No. 16 Chevy Truck Month Camaro ZL1 in one piece — that was my main goal. Unfortunately, I had nowhere to go and got caught up in a wreck. I’m thankful for everyone’s hard work on this Kaulig Racing team. Our first couple of races haven’t gone the way we have wanted them to, but we will keep building. The cars are fast, and I’m starting to learn and get better as we go.”

Underdog Easter Scheme of the Week

There are so many great things about Easter. Easter itself, eggs, candy, bright colors … laundry detergent? What does a parent do when their kid decides to go play in that mud puddle? They put them in the laundry. Drivers played in the dirt this past weekend, and Petty GMS Motorsports decided that it had the solution to clean firesuits. Particularly, Ty Dillon’s No. 42 Gain Chevrolet shone out in Easter-like colors. It was not hard to miss, and Dillon gave them great exposure with his first top 10 run of the year.

Underdogs will have a prime chance to bust the playoff field next weekend at Talladega. Until then, shake off the dirt and have a Happy Easter!

As someone who actually follows some of the underdog teams. I’m happy to see some good nuns from them.
Looking forward to continued success at Talladega, even though I’m not a big fan of superspeedway in general.