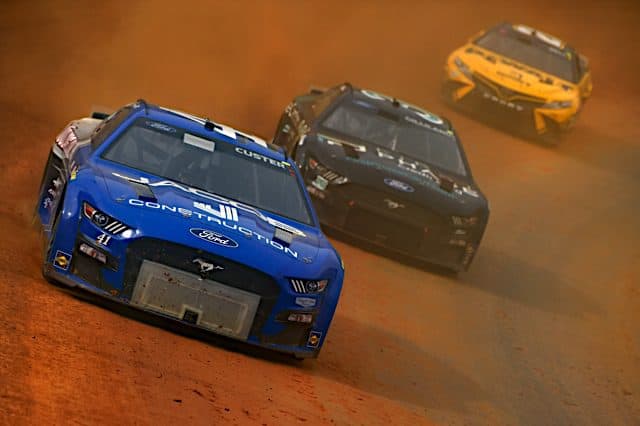 The NASCAR Camping World Truck Series wasn’t the only division of the sport setting its starting lineup at Bristol Motor Speedway on Saturday (April 16), with the Cup Series also having their heat qualifying races for Sunday (April 17) night’s Food City Dirt Race. When the dirt cleared, Cole Custer and Christopher Bell were sitting on the front row.

Todd Gilliland sat on pole as the heats got underway, but quickly lost the lead to Ross Chastain. The Circuit of the Americas winner led the first four laps, but on the fifth Tyler Reddick took charge. Reddick was leading when Ryan Blaney spun to bring out the yellow on lap 9.

On the ensuing restart, Chastain got loose, allowing Custer, Alex Bowman and Gilliland to get by. The bobble also allowed Reddick to escape the herd and claim the first of the heat races from Custer, Bowman, Brad Keselowski, Gilliland, Blaney, Corey LaJoie, Martin Truex Jr. and Chastain.

“There’s just a lot of things,” Reddick said of his triumph. “How you use the throttle, how you use the brakes […] just a great heat race.”

Kevin Harvick was on pole for the second qualifier, but wasn’t able to get away from outside polesitter Kyle Busch. Chase Briscoe made daring moves early, moving up to 3rd position within 3 laps, while his Stewart-Haas teammate Harvick fell to fourth by the time Daniel Suarez spun from sixth place on lap 4 to bring out the yellow.

On the restart, Busch got a good jump, but Bell’s dirt experience served him well as he kept up with his teammate, taking the lead with six laps to go. Bell held on to win the second heat with Busch, Briscoe, Michael McDowell, Erik Jones, Justin Allgaier, Suarez, Harvick and Josh Williams following him.

Joey Logano started on pole for the third heat, looking to build off his Truck Series heat race win just a couple hours before. However, an early bobble allowed Justin Haley to slip by on the first lap. Haley ended up going wire-to-wire, leading all 15 laps to win the third of the heat races. Logano followed under the checkered, with Chris Buescher, Kurt Busch, Austin Dillon, Bubba Wallace, JJ Yeley, Noah Gragson and Denny Hamlin.

“Hats off to the LeafFilter boys, super fast all week,” Haley said. “I’m excited, that was a good run for us.”

Elliott didn’t get a good start, which allowed Ty Dillon to get the better of the No. 9 on the opening lap. Just like Haley in the previous heat, Dillon led wire to wire and win the final heat ahead of Elliott, Larson, Ricky Stenhouse Jr., William Byron, Austin Cindric, Harrison Burton, Aric Almirola and Cody Ware.