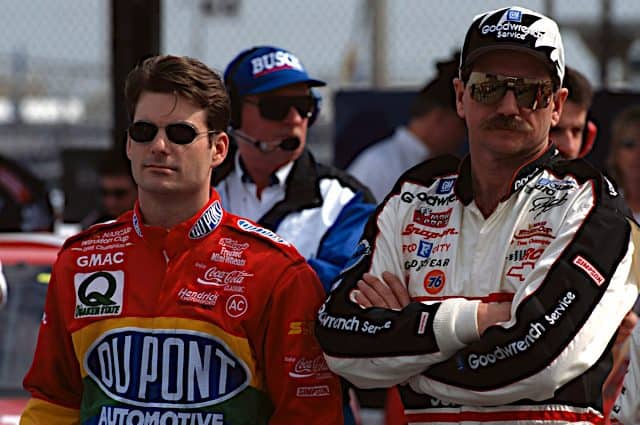 When Ty Gibbs walked up to Sam Mayer after Friday night’s (April 8) NASCAR Xfinity Series race at Martinsville Speedway and gave his competitor a shove before walking away, it touched off a scuffle. Mayer followed Gibbs and gave him some choice words at close range, poking at Gibbs in the process. Gibbs responded by throwing punches.

The exchange was the culmination of a rivalry the pair has nursed since their early days in ARCA and turned into a grudge match Saturday night.

But when it comes to real rivalries, they’ve got nothing on these two.

So much has been made of the long-standing rivalry between Dale Earnhardt and Jeff Gordon that there’s even a documentary about it. Earnhardt was on his way to winning his seventh title when Gordon was collecting his first Cup Series win, and the grizzled veteran vs. young gun took hold among fans.

Real rivalries in sports have a couple of things in common. First, the fans are invested. Heavily invested. There weren’t a lot of Earnhardt fans in the 1990’s who also cheered for Gordon, and Gordon fans weren’t rushing out to buy Earnhardt gear either.

The other thing real rivalries have (that Gibbs’ and Mayer’s lacks) is respect. Earnhardt and Gordon respected each other on and off the track, and the pair did business together as well. Even rivals’ fans generally have a level of respect, if grudging.

It can be, ironically, good-natured. If you watched opening day at Yankee Stadium this year, you might have noticed that the Yankees were introduced to the tune of the Star Wars score, in particular Luke Skywalker’s theme song. The rival Red Sox? They took the field to the evil Emperor’s theme. It was perhaps sports’ most storied rivalry done right.

It really started in 1995. Earnhardt won his seventh championship in 1994, and Gordon won his first race (and his second), but wasn’t really a threat to the Intimidator’s title bid.

But the ’95 season was different. On paper, both drivers put up numbers that would have made them championship contenders in just about any company. Gordon won it, of course, but Earnhardt’s numbers were good enough to best everyone else easily. Just not Jeff Gordon.

Gordon fired the first shot, winning the Goodwrench 500 at Rockingham in the season’s second event. Earnhardt had run second to Sterling Marlin in the season-opening Daytona 500.

Gordon won again two weeks later at Atlanta and yet again two weeks after that at Bristol. In those first six races, Earnhardt finished worse than third only once, at Bristol, and he took his first win a week later at North Wilkesboro, a track racing on borrowed time in 1995. Gordon finished second, albeit a distant second, 13 seconds behind Earnhardt.

Earnhardt’s second win came three weeks later, in May at the then-Sears Point Raceway in Sonoma. The pair took a month off from winning after that (though there wasn’t much for the field after Terry and Bobby Labonte took three of those four races), each scoring a top five in that span.

Gordon came out swinging at the second Daytona go-round as summer heated up, and went back-to-back the following week at new Hampshire Motor Speedway.

When the series went to Indianapolis for the second time ever, Earnhardt picked up where Gordon had left off the previous year, crossing the yard of bricks first (though it would be another year before kissing those bricks became a tradition).

By midsummer, the pair had emerged as title favorites. After Indy, Gordon held the lead, with Earnhardt 121 points back in third (not nearly the deficit under that points system as it would be today). Marlin held second on the strength of three wins of his own.

The 1995 season was five races shorter than the 36-race schedule today, and there would be no resetting of points with 10 races to go, so the points battle was just heating up.

Earnhardt liked to toss barbs at his young rival. At one point he asked Gordon, who was just 23 when the season began, if he’d have to toast the crowd with milk if he won the title. Gordon generally laughed them off, preferring to do his trash talking on track, but the seeds had taken hold.

Earnhardt’s fans thought Gordon was too corporate. He’d run open-wheel sprint cars coming through the ranks, not late-model stock cars. Gordon was polished and almost painfully well-spoken, while the older Earnhardt was decidedly rougher around the edges (though in reality just as “corporate” as Gordon given his vast business empire), the blue-collar hero of the masses.

Gordon’s fans thought Earnhardt was too rough, too good-old-boy for Gordon’s fans, who were often younger (but not necessarily new to the sport) and not as vastly Southern in origin.

Gordon won twice more as summer turned to fall: the Southern 500 at Darlington and the fall race at Dover. Earnhardt also won a pair in the fall, at Martinsville in September and Atlanta to close out the 1995 season.

When it was over, Gordon won his first Cup title, denying Earnhardt his eighth. And yes, he toasted Earnhardt with a glass of milk. The sport’s last great rivalry was underway.

The Gordon vs Earnhardt saga is one of the most hyped up non-rivalries ever told. The two men had nothing but immense respect for the other, and it showed with how they interacted on the track and off.

The real rivalry was always between the two fan bases in my opinion. They represented something different for both groups. Dale was the establishment figure from the “Old School”, while Gordon was the fresh-faced newcomer with Hollywood good looks who could give scripted speechs and interviews effortlessly.

It was really all about their contrasting identities, The Man In Black vs The Rainbow Warrior.

I completely agree. Neither of them had a bad thing to say about each other. 2 of the best to ever do it.

Hard to believe that was over 25 years ago. Fans were a lot more passionate back then than they are now and there were a hell of a lot more of them. You could go to any mass gathering in America and find someone wearing NASCAR attire. Now spotting someone wearing NASCAR gear is like spotting some rare bird on the edge of extinction. Without those hardcore fans there can be no rivalries. At least Brian got his wish of attracting more casual fans.

only time i see someone wearing nascar gear is when they’re either racing at ams or talladega and people stay in west ga and that’s even dropped off. they’re giving away tickets to ‘dega here at the one radio station, however they’re saying the tickets are for saturday but are saying “see the cup race”, so the promotions people at the radio station don’t even have a clue.

it is a lifetime ago since earnhardt/gordon.

Are there any short track Tees at the NA$CAR Cup tracks any more. There used to be Oswego and Cayuga and Michigan and New York and Ohio tracks at MIS.