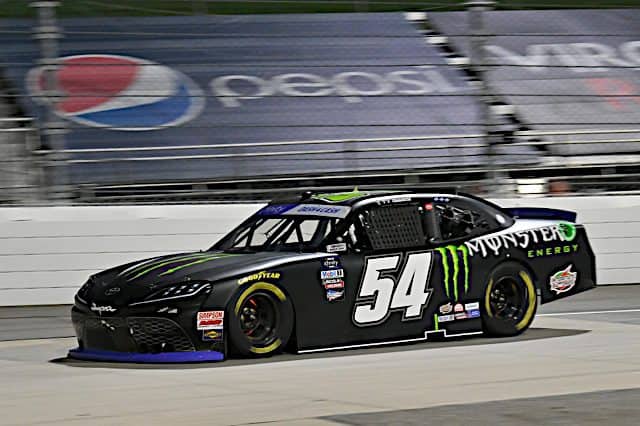 Ty Gibbs has been fined $15,000 after making contact with the rear bumper of Sam Mayer‘s Chevrolet once the pair reached pit road after the NASCAR Xfinity Series’ Call 811 Before You Dig 250 at Martinsville Speedway on Friday (April 8).

Gibbs, who had led 197 of the 261 laps at the Virginian short track race, was upset with Mayer after a push from the JR Motorsports driver took him out of contention for the win during an overtime restart, dropping Gibbs to eighth. On the cooldown lap, Gibbs bumped the No. 1 car several times.

On pit road, the No. 54 Toyota hit Mayer’s car one more time while crew members, officials, media and other personnel were walking around the cars and was seen as a safety hazard, inciting the penalty.

The applied fine is for the contact on pit road and not for the ensuing physical altercation that occurred between the two drivers after they had climbed out of their cars.

In addition, crew members of the No. 2 Richard Childress Racing machine, driven by Sheldon Creed, have been suspended for “loss or separation of added ballast from the vehicle.” Crew chief Jeff Stankiewicz, car chief Kris McCabe and engineer Sam Bowers will not be allowed to participate in the next four races.

No points deductions were given to either of the Xfinity teams.

So 15 grand only for hitting another car on pit road, however it is perfectly acceptable to shove an official? Ok I got it now…

I really think young Gibbs has lots of talent but after Martinsville I think coach Gibbs needs to park him for a week.
I know there are sponsors to consider and bonus $ which may require starting all races but this young man has disappointed lots of race fans.

Needs to be fined for not taking off the helmet 😂

Mayer needs to be fined for being stupid. Going to fight without a helmet

$15,000–wow! Talk about privileged! The little golden boy walks away with a mere slap on the wrist. I wonder what the fine for these aggressions would have been if the perpetrator had been a nobody instead of the second coming. The talk on Sirius NASCAR radio has been that NASCAR needed to come down hard on the kid. That went on deaf ears. I used to like him, but he has lost all my respect after these stunts.

Just imagine the extensive fines/suspensions NASCAR would have issued if Carl Long would have done that.

Grandpa Joe, if he has even a shred of the moral dignity he pretends to have for TV cameras, should bend this kid over his knee and set him straight.

Last edited 9 months ago by Jeremy
2
0