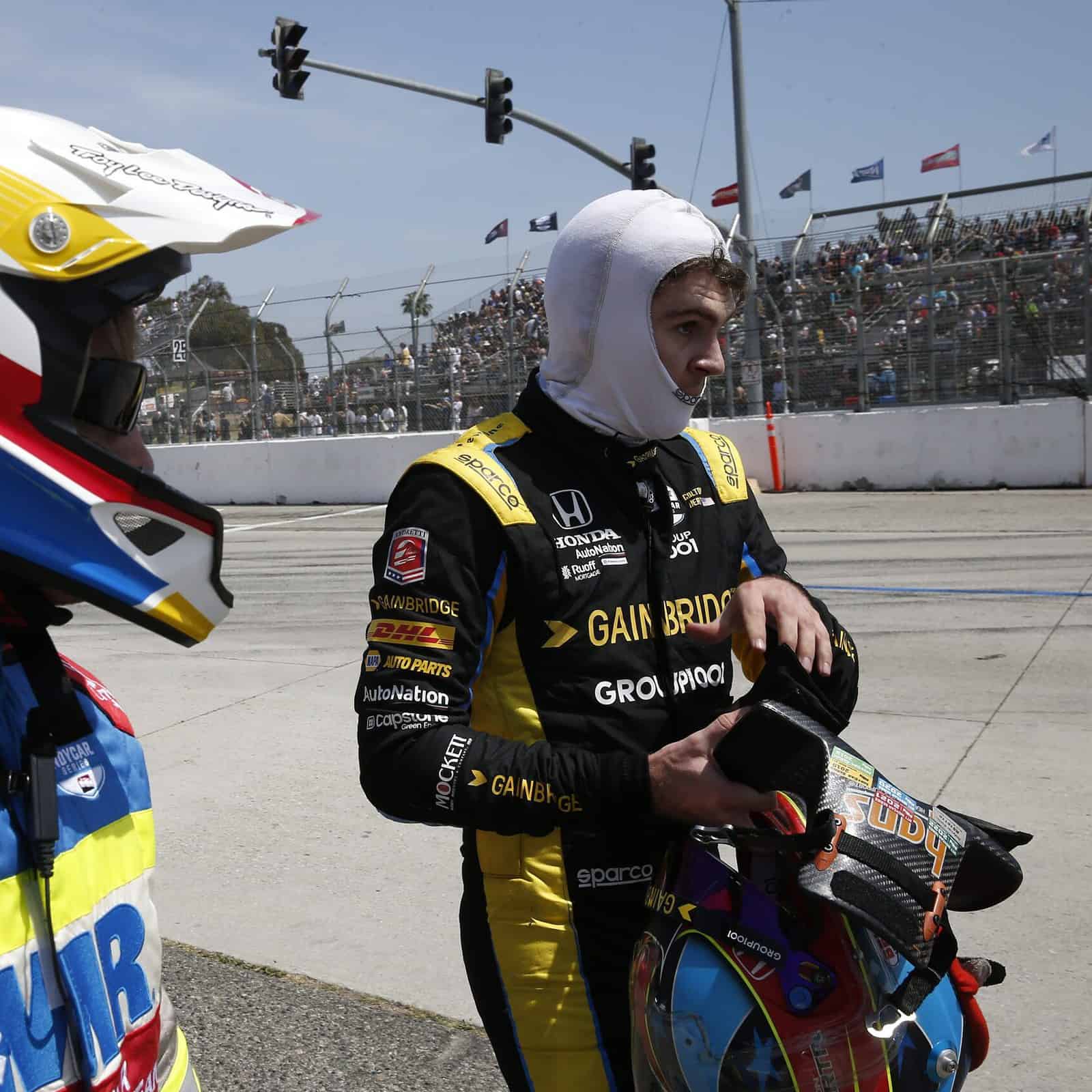 LONG BEACH, Calif. —A dominant weekend with a new track record in qualifying and 28 laps led went for naught as Colton Herta’s race ended with a damaged car in pit lane in Sunday’s (April 10) Acura Grand Prix of Long Beach.

As race leader Alex Palou pitted on Lap 56, eventual race winner Josef Newgarden assumed the lead with the No. 26 Andretti Autosport Honda charging behind as both attempted to turn some fast in laps before their final pit stops.

However, Herta braked too late approaching turn 9, possibly hitting a bump that has upset many cars throughout the weekend. Herta locked up his right front tire and the car was unable to turn as much as Herta needed it to. The left side of the car hit the wall, damaging the suspension on both left corners of the car and dislodging the nose cone and front wing assembly. Herta took the alternate pit lane entrance and his car would not go any further, ending the 22-year-old’s race in the pit lane.

Déjà vu all over again.

Before the FCY, Colton Herta crashed trying to get back toward the front.#INDYCAR // #GPLongBeach

Herta’s accident comes after the 2018 Indy Lights series runner-up had to race in catch-up mode. Herta’s first pit stop of 9.2 seconds was slower than Palou’s (7.3 seconds) and Newgarden’s (7.7 seconds) and try as he might, Herta could not get around Newgarden on track and was behind the No. 2 Team Penske Chevrolet as both Americans had yet to make their final stops.

“I just broke a little bit too late, got in there, locked the right front and that’s it,” Herta said on pit road. “It’s just a stupid mistake, like we were definitely in that thing. We were running good there in third and keeping up with Alex and Josef, so it’s unfortunate. I feel really bad.”

Chris Jones from INDYCAR snapped this photo of Colton Herta’s car after it had stopped on pit road. A weekend’s work came to an end after wall contact. #AGPLB #IndyCar pic.twitter.com/NXL6MrtcbF

Herta’s misfortune was the end to what was by all accounts a near-perfect weekend. After finishing both pre-qualifying practice sessions in sixth and second, Herta set a new lap record around the 11-turn, 1.968 mile street circuit that was nearly a full second faster than the old lap record from 2017.

After leading the Sunday morning warmup session by over three tenths of a second, some would assume that Herta’s race would be a cakewalk. However, nearly pulling into the wrong pit at the first pit stop only started a series of problems for the youngest winner in IndyCar history.

The right front tire changer had a small issue removing the used tire while the right rear tire changer was slow to get the new tire secured on the car. That caused Herta’s pit stop to be nearly two seconds slower than Palou’s, giving the 2021 IndyCar champion the lead in the middle portion of the race.

That lost time, plus Palou’s in lap before pitting being a full second faster than Herta’s meant that the No. 10 Chip Ganassi Racing Honda had an easier path to the lead en route to a third place finish.

“I was not surprised,” Palou said of his sudden lead early in the race. “That was what we were aiming for, that was the strategy. I knew we had a good stop. We had a really fast out lap, so I knew we were going to be in a really good position. Yeah, I was not surprised. I was obviously super happy that everything worked out and the strategy side went really well.”

Herta’s misfortune resulted in a 23rd place finish, dropping him from seventh to 11th in points. Herta will have a chance to redeem himself at the Honda Indy Grand Prix of Alabama on May 1st.