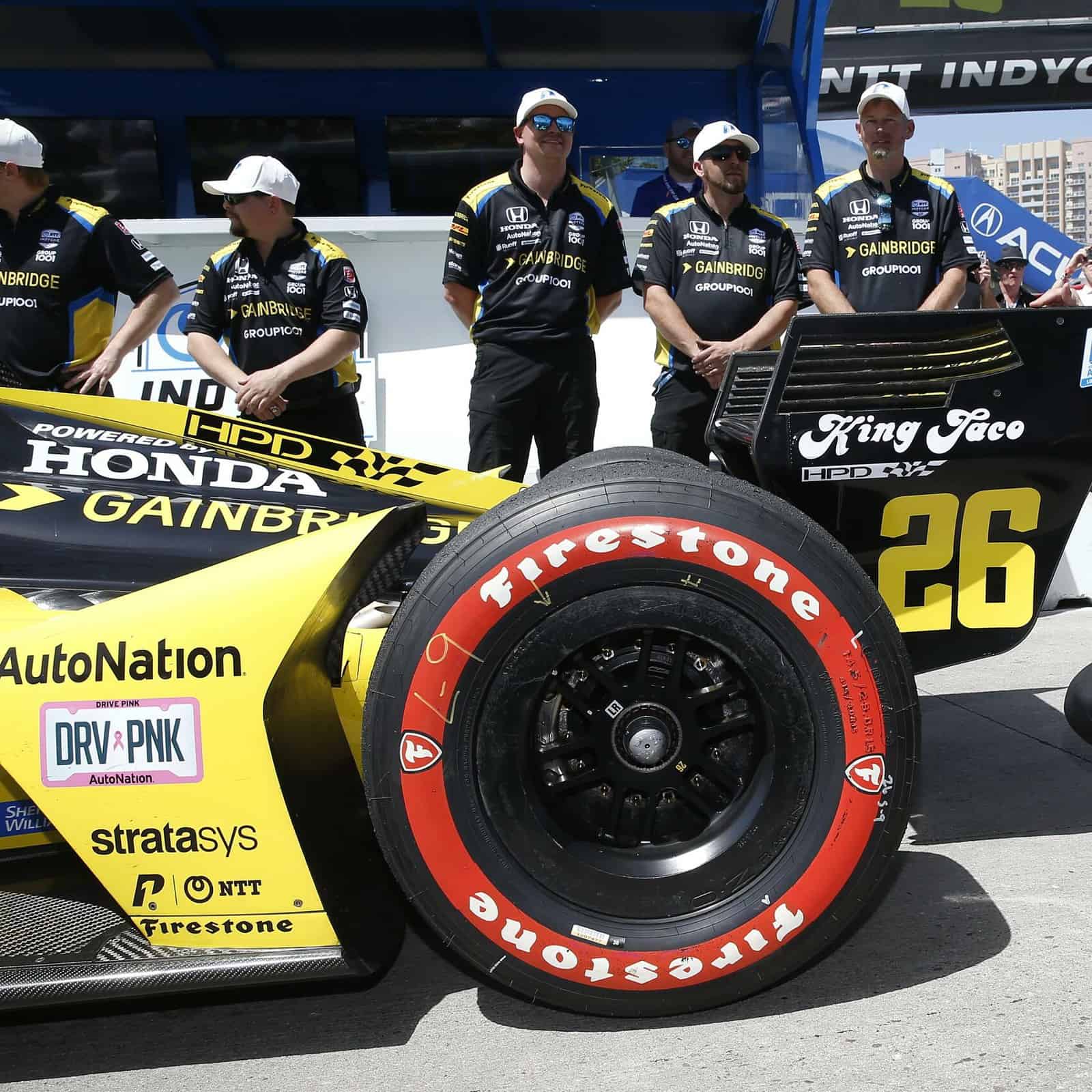 LONG BEACH, Calif.— Long Beach seems to be Colton Herta‘s town as the No. 26 Andretti Autosport Honda went nearly a full second faster than the old track record in qualifying ahead of Sunday’s (April 10) Acura Grand Prix of Long Beach.

Josef Newgarden qualified second in his No. 2 Team Penske Chevrolet .4455 seconds behind Herta’s car while Alex Palou’s No. 10 Chip Ganassi Racing Honda was third, .5572 seconds behind Herta. After Palou, Felix Rosenqvist was fourth ahead of Alexander Rossi and Romain Grosjean in the final round of qualifying.

In group one of the first round of qualifying, the even-placed drivers from the final practice session took part in the incident-free session as Herta, Rossi, Rosenqvist, Scott McLaughlin, Kyle Kirkwood and Marcus Ericsson advanced to the second round of qualifying. Graham Rahal led the rest of the drivers that did not advance, including Jimmie Johnson who was driving with an injured right hand following an accident yesterday in practice.

Johnson would be last in this group of qualifying, starting Sunday’s race from 25th after he was ruled to have impeded Rahal during the session. Johnson was leaving pit road and had just exited the pit lane exit road into the outside of turn 1 as Rahal was going through there on a fast lap. Rahal had to adjust his line in response, but knew the situation.

“It’s a tough spot down there in one, Jimmie came out and I was surprised,” Rahal said. “I thought he was going to stay right and let us through. At the end of the day as you can see even with Jack, our cars are not easy to drive. It’s very hard to get the lap time.  […] [Jimmie]’s going through enough this weekend.”

In group two, Grosjean set the fastest lap of the final group in round one of qualifying to lead Simon Pagenaud, Will Power, Newgarden, Palou and Pato O’Ward into the second round of qualifying. Group two was mostly incident free except for Conor Daly in the No. 20 Ed Carpenter Racing Chevrolet as the Indiana native brushed the wall with the left side of his car exiting turn 8. Daly made it back to the pits using the auxiliary pit entrance in turn 10 and was not penalized for his contact.

In round two of qualifying, there was no contact but there were frustrations over drivers slowing for other drivers in the hairpin. Ericsson approached McLaughlin on the exit of turn 9 and McLaughlin pulled to the right to let Ericsson through. However, Ericsson slowed down to abort his lap.

“It was just a cluster out there with the traffic,” McLaughlin said. “I don’t know what Marcus was doing, he came at me like on a fast lap, I tried to do the right thing and pull out of the way and then he just stopped, so it clustered the whole thing up and then everyone behind us, it was a whole thing. We’re trying to find gaps out there but you think a guy’s on a fast lap, you make a gap for him and he stops right next to you and won’t let you back through.”

“I think it was pretty clear I was on a hot lap and [McLaughlin] was on a prep lap and he backed me up into turn 9,” Ericsson said. “And then I had to abort that lap and try and start another lap and he tried to overtake me into [turn] 11, so yeah.”

Race control called no penalties for interference for any driver so the Fast six lineup would be Herta, Rossi, Rosenqvist, Palou, Newgarden and Grosjean.

In the Fast Six, Herta set his fastest lap within the final minute of the session. However, with only two seconds left in the session a red flag was called for Grosjean’s stopped car in the tire barrier in turn 5.

Race control called for a one timed lap period as the final round of qualifying hadn’t had six guaranteed minutes of green flag running time, but nobody could top Herta’s fastest lap.

“As a young kid I always dreamed to be an IndyCar driver and that’s because of this race,” Herta said after winning his eighth pole. “And to finally get the win last year was amazing and we checked another box off today with the pole. It feels incredible. […] It seems like we have a good car right now and we’ll try some stuff and try to help the car out a little bit tomorrow in the warmup and then see how we go in the race.”