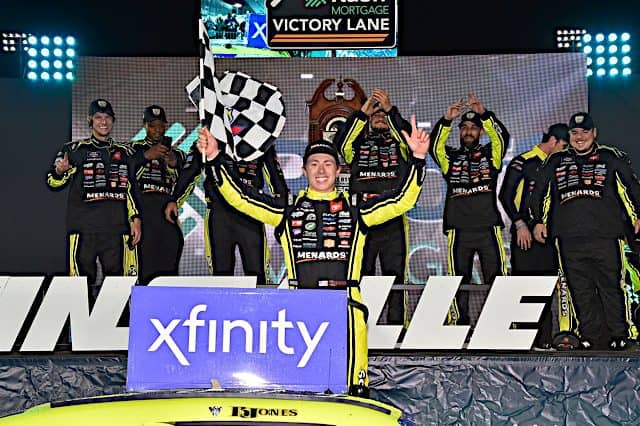 Brandon Jones utilized a last-lap pass on teammate Ty Gibbs in a second attempt at overtime to win the Call 811 Before You Dig 250 at Martinsville Speedway Friday night (April 8). In a race that saw a 30-minute rain delay, 16 cautions, a Big One at the start-finish line, two overtimes, and close racing throughout, Jones scored his first win since 2020.

“We won today, I can’t say that we could’ve played it out any better,” Jones told FOX Sports 1 post-race. “I love the call we made to get stage points. Drove the thing all the way from the back to the front, had all older tires than all those guys at the end.”

“I’ve won at a lot of different places now and this is one that you have to get after it. Ty [Gibbs] ran a really hard race. And when he cleared me really early in stage three, he had a strong GRC Supra as well. But it’s fun to beat him, he’s hot right now. He’s tough to beat. So that’s a good one.”

Jones was able to run even with Gibbs on turns 1 and 2 of the final lap after Gibbs missed the corner exit heading to the white flag. Jones began pulling away in turn 3, where Gibbs then fell into the clutches of Sam Mayer, and contact between the two sent Gibbs up the track into the final turn and out of winning contention. Gibbs was not happy with Mayer after the race, and he showed his displeasure by ramming Mayer after the checkered flag. And once they got on pit road, their argument escalated into a fistfight.

“I tried to talk to him, and he got all in my face, so you know, at that point we got to start fighting,” Gibbs said. “We got put in a bad position there and the only thing I’m mad about is this 1 [Mayer] didn’t have anything and wasn’t gonna get past the 16 (AJ Allmendinger) there. I just got hit in the left rear but it’s just frustrating, I just got drove into the fence. But I was on the other side of it last week, so that’s just part of it.”

“100 grand on the line, I put the bumper to him because that’s what short track racing is all about,” Mayer said. “He got upset. ‘Ay ye ye short track racing’ and all that nonsense, so whatever, you throw a couple punches like they were weak, can’t say much about that, it’s kind of funny. But I just put the bumper to him for 100 grand and he got upset about it but he’s been doing that to everyone else every week so far.”

Sam Mayer gives his side of the story about the tangle with Ty Gibbs: pic.twitter.com/61YVXcf1wW

“Really big deal,” Allmendinger said. “[To] get the men and women at Kaulig Racing some hard-earned money because they’ve been working really hard, but you know, we did all we could with this Action Industries Chevy Camaro, it was definitely not where we wanted to be. But my crew chief Bruce [Schlicker], pit stops were phenomenal. So we were gonna maximize it. I thought we were gonna finish third or fourth anyway, and then we got whatever the hell was going on there.”

Allmendinger entered Martinsville as the Xfinity Series points leader, and he now holds a 20-point advantage over Gibbs heading into the next race at Talladega Superspeedway. The next Dash 4 Cash event will be at Talladega, and Allmendinger will be joined by Jones, Cassill, and fourth-place finisher Austin Hill in competing for the $100,000 prize.

Mayer ended up in fifth place after the last-lap contact with Gibbs, while Riley Herbst finished sixth and Ryan Truex finished seventh.

And when all the dust had settled, Gibbs finished eighth after leading 197 of the 261 laps.

Ryan Sieg finished ninth, Jeremy Clements rounded out the top 10, and Dale Earnhardt Jr. recovered from a late-race spin to finish 11th in his lone Xfinity Series start for 2022.

The race was scheduled to start at approximately 7:45 p.m. ET, but just as the command to start the engines was given, rain began falling and the race was delayed for about 30 minutes.

When the green flag finally waved, it only took turns for the caution to come out, as Brennan Poole suffered an engine failure on lap 1. The race resumed on lap 14, and stage one was mostly uneventful as Gibbs led 59 of the 60 laps and cruised to an easy stage win.

The beginning of stage two brought mixed strategies, as Noah Gragson, Earnhardt Jr., and others pitted during a caution on lap 40 and leapfrogged the rest of the field when they pitted during the stage break. Gragson inherited the lead, and he held on to the top spot until he was passed by Gibbs on lap 88.

Gibbs then continued his domination, as he had led 93 of the first 117 laps. But a spin by Derek Griffith off the bumper of Anthony Alfredo brought out the caution and set up a two-lap shootout for the end of stage two. Gibbs, Gragson, and most of the leaders decided to forgo stage points for track position, and Jones stayed out on the track to win stage two.

Gibbs inherited the lead for the start of stage three and was cruising with a comfortable advantage until a crash by second-place Justin Allgaier brought the leaders onto pit road for the final time with 91 laps to go.

Sheldon Creed inherited the lead, and Jones then made quick work of him on the restart. Jones maintained the lead during a rash of cautions, but once there was a green flag run longer than five laps, Gibbs made his way back around Jones on lap 187 and looked to be cruising to the win.

The race then had a 35-lap green flag run, the longest of the night. But a spin by Stefan Parsons on lap 221 brought out the caution once again, and the rest of the race was stop-and-go from that point.

During each restart, Gibbs got a jump and maintained his lead. A spin by Earnhardt Jr. off the bumpers of Jeremy Clements and Josh Berry on lap 243 set up an overtime finish, and on the first overtime restart, a 15-car crash was triggered at the start-finish line after Mayer spun his tires and then ricocheted into Gragson after being bumped by Allmendinger.

Brandon Brown, Mason Massey and Jeb Burton were unable to continue from the accident, and Gragson’s chances at the win were over after running top five for most of the night.

The race was then put under a second lengthy red flag as the cleanup continued, and once the race resumed, there was a two-lap shootout with Gibbs and Jones on the front row. When the green flag flew, Gibbs got clear of Jones, but a poor corner by Gibbs heading into the white flag lap allowed Jones to run side-by-side with him through turns 1 and 2. Jones then had the advantage heading into turn 3, and he scored his fifth career Xfinity Series win while Mayer and Gibbs fought behind him.

The Xfinity Series will be off on Easter weekend but will head to Talladega Superspeedway for the Ag-Pro 300 on Saturday, April 23 at 4:00 p.m. ET with TV coverage provided by FOX.

lol it’s a long season, I’m just waiting for Ty and Noah Gragson to take their helmets off on pit row after a race.
lololol

Ty Gibbs is a punk and smart ass. His grandfather should sit him in a chair and give him a good slap to bring him back to reality.

who do you think taught him to be such a asshole, the gibbs like to hide behind God, But we now see there true colors by there actions and the gibbs are not people of God