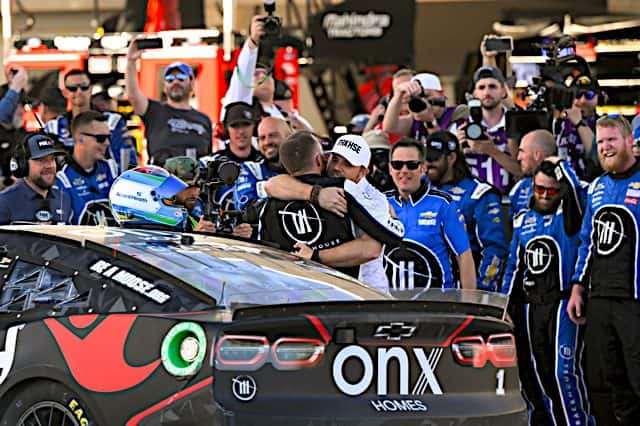 Did You Notice? … Trackhouse Racing Team is laying a foundation for future NASCAR success?

Ross Chastain brought the team to victory lane in just their 48th NASCAR Cup Series start, all but clinching a 2022 postseason bid for the organization Sunday (March 27) at Circuit of the Americas. It’s just their sixth race together in only the team’s second season, expanding to two cars at the beginning of 2022.

Considering how hard the hill is to climb in Cup ownership, that’s a major step. For decades, a handful of owners have stood head and shoulders above the competition, limiting the ability of others to establish a foothold within the sport. Just last year, three teams combined to eat up 11 of 16 playoff spots: Hendrick Motorsports, Joe Gibbs Racing and Team Penske. Add in Stewart-Haas Racing and those four organizations have won every championship but two during the sport’s postseason era (2004-21). Roush Racing (Kurt Busch, 2004), now RFK Racing, and Furniture Row Racing (Martin Truex Jr., 2017) are the lone exceptions.

FRR was a rare success story against them, a single-car team out in Colorado slowly building their program up over the course of a decade. But even in their case, a year after Truex’s title, the team was closing up shop after sponsor 5-Hour Energy bailed. After their successful satellite partnership with JGR made them more successful than the mother ship, the multi-car giant wound up absorbing the remnants (along with Truex) by February 2019.

Owner Barney Visser never had pockets as deep as his competitors, expanding to two cars just once (in 2017) and needing money from his own business and Toyota to help subsidize the operation. He also needed a chassis and top-tier equipment partnership from a major program like JGR to have a shot at running up front.

That’s where the Next Gen car changes the game. Universal chassis mean new ownership doesn’t have to rely on established programs to receive all the major parts and pieces needed to win.

“I really believed since day one,” TRT owner Justin Marks said Sunday, “that this car delivers an opportunity for these companies to feel like real teams and to really invest in teamwork, the way the … [Nos.] 1 and the 99 work together and how everybody feels motivated and empowered.”

TRT seems different in all sorts of ways. The financial foundation is sound, led by an ownership conglomerate that includes Grammy Award-winning artist Pitbull. Marks, a former driver himself, has the cache to build up personal relationships on the ground. His vision and powers of persuasion have led to anything from the signing their initial driver, Daniel Suarez, to several primary sponsors and the biggest coup of all: convincing Chip Ganassi to sell his Cup Series organization to TRT last summer as the team prepared for 2022 expansion.

“This was an ambitious thing to sort of dream up,” Marks said Sunday. “I asked a lot of people that had a lot of experience in this sport and seen a lot of teams come and go to trust me and to commit to Trackhouse. And so to be here [in victory lane] not even — not even a year and a half really into our existence, I’m just proud of everybody that committed.”

It also puts them within striking distance of some of his longtime competitors. It’s hard to believe in this day and age, but Hendrick, Roush, JGR and Penske — they all started as one-car operations built from scratch. None of them won championships right off the bat. Although year two was an important building block for Roush and JGR, in particular. Both competed for championships, finishing inside the top five in points while Dale Jarrett won the 1993 Daytona 500 for JGR.

The key was having enough success to stay relevant, attracting additional sponsorship and better people. A closer look shows TRT is right in the ballpark in terms of matching their early success.

Note that while TRT’s strong start this year has launched them ahead of Michael Jordan’s 23XI Racing program, they’re experiencing success in their own right with Bubba Wallace and Kurt Busch. It’s not inconceivable 23XI and TRT could combine to put all four of their drivers in the playoffs, a power shift no one thought possible when both teams appeared on the landscape one year ago.

Instead, NASCAR’s recent history is littered with those who couldn’t make it. Reigning Formula One champion Red Bull Racing spent millions in Cup from 2007-11, winding up with just one playoff appearance and no top-10 points finishes to show for it. They won only twice, had a whopping 32 DNQs among two cars in their first year of existence and filtered through about a half-dozen drivers before pulling out.

Michael Waltrip Racing was another Toyota expansion effort, back in 2007 that spent its first year mired in dozens of DNQs and a cheating scandal over a fuel additive that marred their Daytona 500 debut. It took until year three for the team to win a race, and they never cracked the postseason until year six.

Others have come and gone, briefly able to challenge the sport’s top tier but never staying there: PPI Motorsports (Cal Wells), Bill Davis Racing, MB2 Motorsports, Hall of Fame Racing. More recently, we’ve seen Germain Racing, Leavine Family Racing, even Chip Ganassi Racing fall by the wayside. Those owners will argue there’s parity; it just happened at a level well beyond what they were capable of reaching, doors that were never going to open for them.

NASCAR is due for a shakeup at the top, and the Next Gen was designed to create it. TRT has won itself a battle … will it be able to take the next step and win the war?

I think it’s more than a bit early to start comparing Trackhouse to Hendrick. A more valid question might be is Gibbs on it’s way to becoming the next Ganassi?
Either way, the list of young winners can’t be very comfortable for the aging veterans who don’t see themselves as ready for the rocking chair yet. The new generation is getting it done, & they’re way cheaper to hire.
I’d be really worried if I’d just lost my long time sponsor, & my owner had a hot shot family prospect waiting impatiently in the wings.

Do you honestly think Kyle should be really worried !!! I bet Kyle isn’t.

Kyle has banked so much money in the last 20 years that he shouldn’t worry about anything for the rest of his life.

Kyle drove a DeWalt sponsored car at Phoenix. I wonder if Bell is worried that DeWalt will move over to the 18 to take M&Ms Mars’ place. I like Bell and don’t like Busch, but unfortunately Bell has been kinda invisible during his cup career at Gibbs.

Trackhouse has indeed been impressive, as has Childress incidentally, but let’s not get hasty. Hendrick hasn’t quite found their usual dominant form yet even though they’ve won a few races, and Gibbs is going to get better likely very soon. Let’s not forget that two of the six races have been pack races that produce random results and a lot of good drivers as always got caught up in wrecks not of their own making.

That said, I thought even last year that Chastain had the stuff to be a championship contender, running as well as he did with a second tier team. Likable cat too. It will be fun to see what he can do.

Mmm HMS has won half of the races ran this year. All 4 of those drivers in the playoffs !!!

True. Hendricks won Fontana (5). Then won Vegas (48, with all 4 in the top 10). They missed it a bit at Phoenix, but then Won Atlanta (24, with 9 and 48 in top 10). Finished 2nd and 4th at Cota. With 3 of the 4 already clocking a win, and the other expected to win. As they get more races in, and more data to better prepare their cars, the rest of the field better watch out! Hendricks is still THE organization setting the bar. To note, I’m not a Hendricks fan but it’s hard to dispute the data.