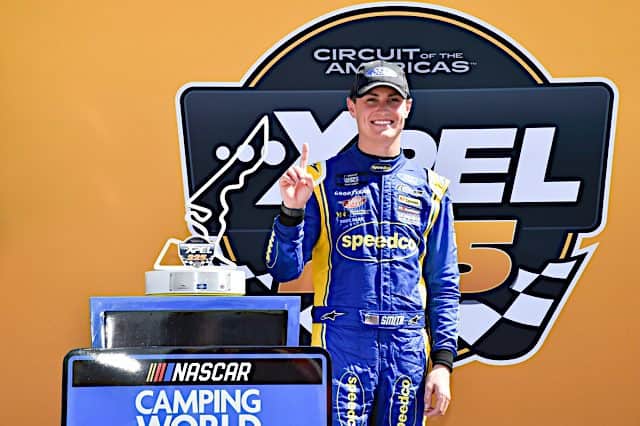 Zane Smith snuck into the lead after contact between the top-three trucks with two laps to go to earn his second NASCAR Camping World Truck Series victory of 2022 at Circuit of the Americas in Austin, Texas on Saturday, March 26. John Hunter Nemechek also snuck by to earn his first top five of the year by finishing second, followed by Kyle Busch, Ben Rhodes and Chandler Smith.

Right from the drop of the first green flag, everybody in the Truck Series field knew the man to beat was going to be the No. 51 of Busch, and indeed, he was. What else is new?

Busch led a massive 30 laps throughout the day on the 3.4-mile road course, and the only time he wasn’t leading was after making a green-flag pit stop. He was the only driver to keep the lead for longer than one lap aside from Zane Smith.

However, the final stage saw a large number of yellow flags prolonging the race. By the end, the field would have to settle for an overtime restart. Of course, with a field of 30-plus trucks navigating the opening corners of the Circuit of the Americas with only two laps to go, you can likely predict how the first attempt worked out.

After one truck spun, then another, and another did, Busch still kept the lead from fellow Cup Series driver Alex Bowman throughout the restart.

With one more attempt at a green-flag finish, Busch was expected to not have much difficulty in keeping his lead. After all, he had been doing so the entire race.

When Busch wasn’t in the lead, the leader was mostly Front Row Motorsports driver Smith, who went on to sweep both stage 1 and 2 victories and led 11 laps throughout the day.

With two laps to go, Zane Smith’s No. 38 was only fourth, behind a hard-charging Stewart Friesen and Bowman, who had gotten the closest to Busch’s back bumper as anyone had the whole race.

With the second and final overtime restart, everything was going Busch’s way. Bowman had dropped from second to third behind the No. 52 of Friesen, which meant the two were now in a dogfight for second far behind the Kyle Busch Motorsports Toyota.

Everything was great – until they reached the hairpin turn 11.

After Busch was shuffled back to fifth, he used his last lap and a half to muscle his way to back to third. While a top five might be great for most NASCAR drivers, a top five for the two-time Cup Series champion after what was a dominating day was certainly a disappointing one.

There were a number of spins today, and with that, a number of new rivalries and hurt feelings as well.

But none were more aggressive than that between Matt Crafton and Chase Purdy.

It began early on in the event, when the young Purdy got into the back of the three-time series champion Crafton. One time certainly upset the veteran, but on a road course, sometimes these things happen.

Then it happened a second time, and it sent the No. 88 Toyota straight into the gravel.

Sounds like Professor Crafton's class is about to start 👀 pic.twitter.com/gWpjvTegrg

Crafton wasn’t making idle threats. Right before the end of the second stage, Crafton slammed the back of Purdy and spun the No. 61 Hattori Enterprises Toyota.

Zane Smith turns Nemechek as they battled for the lead. … then Crafton has at it with Chase Purdy.

The ThorSport Racing driver finished 13th when it was all said and done. Purdy would finish 16th.

It was the feel-good story of the day, and it even has a happy ending.

This weekend at Circuit of the Americas provided plenty of opportunity for drivers and teams that don’t normally run NASCAR races. The unique circuit is home to many racing series that have been traveling there for years. NASCAR is a relatively new addition to the Texas track’s schedule.

One of them was Brad Perez, a 25-year-old spec-Miata driver from Hollywood, Fla.

Perez, or as he is affectionately nicknamed, “Bread,” is not your average Truck Series newcomer. While he has been trying to break into a NASCAR ride for some time like other spec-Miata drivers Preston Pardus and Josh Bilicki have, he has served as a tire specialist for teams such as JD Motorsports, Martins Motorsports and most recently Rackley WAR.

This weekend, the team mechanic finally got his shot at his first NASCAR start in the No. 43 for Reaume Brothers Racing.

It was a heck of a place to have his first start, but all the popular Perez wanted from his first Truck Series race was a top-20 result.

It was close, but in the end, he met his goal. Perez finished 20th in his first career NASCAR start. It’s the No. 43 team’s second-best result of the 2022 season so far.

Get that 🍞 @bradxperez snags the top 20 he was hoping for in his @NASCAR_Trucks debut. pic.twitter.com/uWYR6U0Od6

Not bad for a guy who was a tire mechanic last week.

Points Report: Chandler Smith keeps his points lead over Rhodes by 15 points and 23 points over third place Friesen. While Zane Smith leads the playoff standings with a second win, he and Tanner Gray are tied for fourth 31 points back in the regular season standings.

A further 38 points behind the leader is a tie for sixth between Christian Eckes and Ty Majeski. Nemechek sits eighth, while both Tyler Ankrum and Derek Kraus are tied for ninth with a 66-point deficit behind the lead.

Crafton sits only two points out of the playoff cut.

Up Next: The Truck Series travels back east in two weeks for their first short-track race of the season under the lights at Martinsville Speedway. Coverage of the Blue-Emu Maximum Pain Relief 200 starts on Thursday night, April 7, at 8 p.m. ET on FOX Sports 1.

I was only watching the truck race with one eye until that next to last caution. Up until that point Busch and Bowman were both running up front (imagine that, the two cup guys in the field dominating, oooh how exciting). Then, thanks to that late caution, the crapshoot factor took over. Busch got ripped off but, since he shouldn’t have been running in the double-A series, that’s what I call justice.