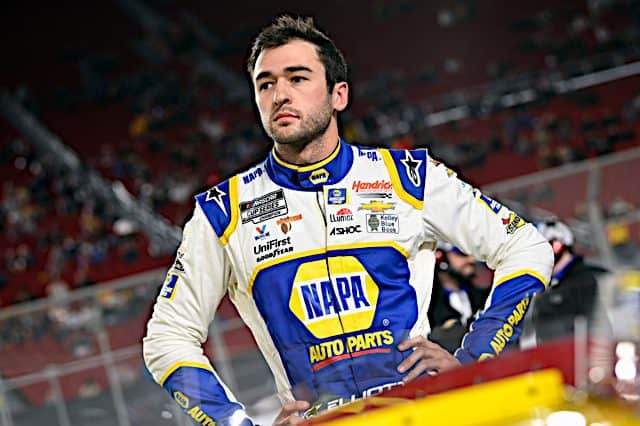 This week, the NASCAR Cup Series makes its way to Austin, Texas for the Next Gen car’s road course debut. Let’s set your daily fantasy NASCAR DraftKings rosters for the Echopark Automotive Grand Prix at Circuit of the Americas, airing on Sunday, March 27 at 3:30 p.m. ET on FOX.

COTA is the first of six road-course races of the season for the Next Gen cars, so we don’t really know what exactly to expect for Sunday (sound familiar?). However, several drivers tested at the Charlotte Motor Speedway ROVAL this past offseason, so you could use the unofficial lap times from that to help set expectations. (Though at the time, drivers weren’t as worried about speed as they were about the cars themselves).

You can also look at the data from past road course events, as certain drivers stand out at these tracks more than others (hello, Chase Elliott!).

Be sure to check out practice and qualifying results Saturday, because some drivers might adapt quickly and post a fast lap right away. If what you consider a top tier driver starts at the back, they would be popular on DraftKings and might record a high score if they finish well.

Before I share my picks for this week, here’s a look at the scores from last week’s race at Atlanta Motor Speedway:

Well, this lineup wouldn’t have done quite as badly if Ryan Blaney hadn’t hit the wall on the last lap. He likely would’ve had a top five, but instead finished 17th. Kyle Busch and Austin Cindric were caught up in crashes as well, though much earlier in the race.

As far as DraftKings scoring, the rules are the same as last season: 0.45 points for each fastest lap and 0.25 for each lap led. Additionally, drivers can earn a point for each position they gain on the track (relative to where they start). They can also lose a point for each spot lost, so keep this fact in mind if you decide to play the polesitter.

Elliott is still the road course king, even though he only won two of the seven run in the Cup Series last season. He’s the defending winner at COTA, leading five laps in the rain before the race was halted. He also came from the back at Road America and led 24 circuits last July en route to the victory.

But the main reason why he’s favored this week (and the most expensive driver on DraftKings) is because he has seven road-course victories, 11 top fives and 13 top 10s in 19 starts. He also has the best average finish on this track type by a large margin over his competitors; Elliott crosses the line in eighth on average.

All of Elliott’s Hendrick Motorsports teammates have won already this season, so I expect that it’s the No. 9’s turn to take home the trophy.

Last year, Cindric took home a fifth place at COTA while Kyle Busch dominated. He went on to lead a few laps there in his first Cup Series outing at the 3.41-mile course, though a finish of 25th wound up below expectations. Still, he’s experienced at this track type and should perform well.

I’m only a bit hesitant because of his salary. With the 2022 Daytona 500 winner starting 10th, it’s OK to branch off to alternatives: Joey Logano or Chase Briscoe come to mind.

Reddick won the pole for this race last season and dropped to ninth by the time the race was called for too much rain. He also finished eighth at Road America after taking the helm for five laps and earned a 10th at Watkins Glen last summer. Lastly, at the Charlotte ROVAL, the No. 8 Richard Childress Racing driver drove up to second by the end of the day, tying a career-best performance.

The third-year Cup wheelman was one of the drivers who participated in the Next Gen test at the Charlotte ROVAL last October and was quick there, too. Reddick posted a top-five lap time on day one and was second on day two. If he has truly adjusted this well to the car on road courses, he could sneak in a win at COTA this weekend.

Kevin Harvick‘s first time out to Austin, Texas was not ideal. The rain and spray from the cars were so bad that he couldn’t really see what was in front of him, so when he slowed down for a wreck that was further up ahead, Bubba Wallace ran into the back of the No. 4 car, ending both of their days. Thank goodness it’s expected to be nice and sunny all weekend at COTA.

Though he only earned one top 10 on a road course last season, Harvick still has a couple of wins at Sonoma Raceway in 2017 and Watkins Glen in 2006. The No. 4 Stewart-Haas Racing pilot didn’t finish worse than sixth at WGI from 2015-2019.

I was surprised Harvick’s salary was this low, especially since he has a couple of top 10s this year at Phoenix Raceway and Auto Club Speedway. He also was third quickest on the second day of the Next Gen test at the Charlotte ROVAL. If he adjusted well back then, watch out for him on Sunday.

In the inaugural race at COTA, Jones was able to drive up to 16th after starting 29th, which no doubt produced some position differential points on DraftKings. In fact, that’s how much of last year went for Jones on road courses. He finished 14th at the Daytona road course, 11th at Sonoma and seventh at the Indianapolis road course, all of which were much further up than where he started.

This year, Jones has been running better than where he finishes, as flat tires and other problems have happened late in the race, usually ending his day. But Jones showed a lot of speed at Auto Club Speedway, leading 18 laps on the way to third place.

A 30th-place starting spot, while disappointing for the No. 43 team, makes him even more attractive for your DraftKings lineup. Expect Jones to move his way through the field and be a contender.

Michael McDowell is known for his road course skills and showed it at COTA last year, as he earned a seventh place finish in the rain. He also was eighth at the Daytona road course, part of an early-season momentum swing for Front Row Motorsports after capturing the 2021 Daytona 500.

The former Daytona 500 champion is super inexpensive on DraftKings and could be a popular play. But if he performs the way he did last season, putting him on your roster will be well worth it.

Still early with the new car, before the big teams dominate, would think Ross Chastain would be a strong bet.

Yes, both Suarez and Chastain have been fast this year, and they recorded fast lap times in practice too.