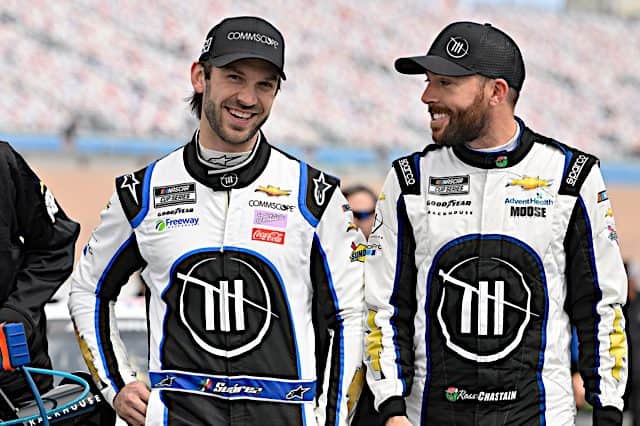 Entering 2021, fans and industry insiders were ready to watch who would grab the early advantage between two of the NASCAR Cup Series’s newest teams: Trackhouse Racing Team and 23XI Racing. 23XI had the luster of Michael Jordan, Denny Hamlin and driver Bubba Wallace in its corner, along with a roster full of Fortune 500 sponsors.

Then, there was Trackhouse, formed by the ambitious Justin Marks in collaboration with Pitbull to bring Daniel Suarez on as the driver. Not nearly as high-profile nor equipment-backed as 23XI, Trackhouse has been on a mission to be NASCAR’s newest elite team. As Frontstretch‘s Brad Harrison raised in 5 Points to Ponder, Trackhouse has the clear advantage over 23XI at the moment.

That continued at Phoenix Raceway in the Ruoff Mortgage 500 (March 13) when Ross Chastain came one spot short of earning his first career win at the premier level. Make it three straight weeks a Trackhouse car nearly graced victory lane.

After leading a career and race-high 83 laps at Las Vegas Motor Speedway en route to a third-place finish, Chastain was on rails again in the Phoenix desert. He had a top-10 car all day long but found himself in fourth in the final stage. A battle between Chase Briscoe and Chase Elliott allowed for Kevin Harvick and Chastain to close in before the yellow flew on lap 286.

On the second-to-last restart, Chastain went three-wide for the lead and was side by side with Briscoe for a brief period. Another yellow with seven to go gave Chastain another opportunity to pounce, but Briscoe’s No. 14 was simply too strong in the end.

Chastain told NASCAR.com this past week that he believed they were “no underdog.”

“I think we don’t have the legacy of winning. I mean, it’s a big deal right now, we win a stage, we’re proud of that,” Chastain said. “I think where the plan is and the preparation we’re putting in is to get to a point where that’s just, ‘Yep, OK. We won another stage, (but) did we win the race?’ …I don’t view us as an underdog and I walk around the shop, we don’t feel like we’re lacking anything.”

The garage is certainly taking notice and Chastain’s performance is backing it up. He has now scored back-to-back top fives for the first time in his career. It was his first Cup top five & 10 at Phoenix, as well as his second runner-up finish.

What does all of this point to for the Alva, Fla. native? His first win is coming soon… very soon.

Trackhouse had quite the day in the desert. Chastain’s finish was the best for the team in its brief history. His teammate Suarez wasn’t far behind, earning a ninth-place finish for his second top 10 of the year. It was the first time in four races a multi-car organization that Trackhouse landed both cars in the top 10. Suarez had a top-15 car nearly all race, but late yellows ignited the crazy Phoenix restarts we have gotten used to.

Some contact with Austin Dillon in the final turn hampered Suarez a little bit, but he was able to show resilience to earn the top 10 after a last-place finish a week ago. It was his best Phoenix finish since an eighth-place showing in Arizona in 2018.

Suarez also brought along his now recognizable “Daniel’s Amigos” for the first time this year, a group of Latino fans that Suarez has brought to select races since 2019.

“I think I will give a wave to them every time I drive by them,” Suarez said in a release this week.

Ty Dillon continues to fly under the radar with the newly-merged Petty GMS Motorsports. Dillon earned a 15th-place result in his No. 42 Black Rifle Coffee Company Chevrolet for his second top 15 of the year. At times, Dillon dipped outside the top 20, putting his streak of three straight top 20s in jeopardy. However, the late cautions allowed him to sneak back in and earn a solid finish for his efforts. His four-race top-20 streak matches the longest of his career coming back in 2017. He quietly sits in 20th in the points standings leaving the West Coast swing.

Kaulig Racing landed both of its drivers in the top 20 at Phoenix, with Justin Haley earning his second consecutive 17th-place finish. A strong at the LA Coliseum exhibition may have set off high expectations, but Haley is finally gaining momentum and consistency, a reputation he built last year in the Xfinity Series. His teammate AJ Allmendinger stormed back from three laps down to finish in 20th on the lead lap. It’s the second time in the past two weeks that the No. 16 has come back from three-plus laps down after Daniel Hemric came back from seven laps down at Auto Club Speedway. The race was Allmendinger’s first points race in the No. 16, which will be shared with Hemric and Noah Gragson.

For the first time this season, Todd Gilliland led the full-time rookies, besting both Austin Cindric and Harrison Burton. Gilliland landed in the 19th position for his second top 20 of the season, a solid run in his first Phoenix Cup start. To compare, Anthony Alfredo (who drove the No. 38 last season), earned his second top 20 of his rookie campaign for the Front Row Motorsports ride at Circuit of the Americas, the 14th race of 2021. Gilliland has also bested veteran teammate Michael McDowell in three of the four races this season.

It was the second time this season that Suarez sported the CommScope colors, but the scheme was the hit of the week for underdog paint schemes. A week after a crumpled racecar with CommScope, Suarez returned the favor with the strong top 10 mentioned above.

We’ve got a couple quick cars out there!

Ross Chastain (2nd): “Like a day at the K1 track. That was so much fun to get to race like that at this level. Trackhouse Racing believes in me and AdventHealth and The Moose, these people they believed in me early in the season when stuff wasn’t going great. That’s so cool to race with Tyler [Reddick] and Chase [Briscoe]. I mean that’s like everything I’ve ever wanted and my crew chief Phil Surgen, like people don’t know how good he is. His adjustments this year have been so incredible and gave me exactly what I needed. Just came up one spot short. I’m so happy.”

Daniel Suarez (9th): “It was a rollercoaster, up and down. I don’t feel that we had the greatest speed, probably top 15, somewhere in there. I made a mistake on pit road, the speeding penalty. We had a couple slow stops. I feel like it was just ups and downs. We were able to recover a little bit. Travis (Mack, crew chief) made a good call right there with the right-side tires only and we were able to get a couple spots back. Overall, it wasn’t a good day, we have to learn and come back stronger.”

Justin Haley (17th): “Our No. 31 LeafFilter Gutter Protection Camaro ZL1 started off building tight but were able to make some positive gains during our first pit stop. Track position here is crucial. I think we had a solid run overall and learned some things we can really build on for our short track program.”

AJ Allmendinger (20th): “We fought some more handling issues today – I lacked rear grip and stability. We made a few major swings on pit road, but just couldn’t quite get the No. 16 Action Industries Camaro ZL1 feeling the way I wanted it to with the speed we needed. It was frustrating for sure, but we learned all we could from the issues we experienced. This is a track we have been spending a lot of time putting our focus on, so hopefully the gains we made today carry over to the next time we come here in the fall.”

With the West Coast swing now in the rearview mirror, the series heads south to the freshly repaved Atlanta Motor Speedway. With three drivers looking for their first win dueling it out at Phoenix, don’t be surprised to see an underdog in the hunt next week.

you forgot to mention anything about Kurt Busch… 23 11s new under dog team. HE FINISHED 5th !!!!!