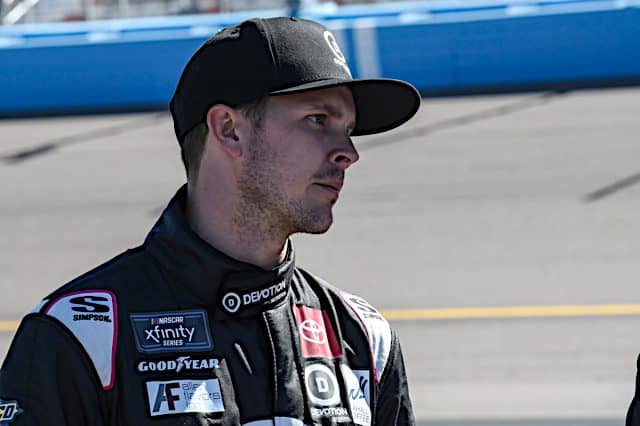 Before his seven-race stint for Joe Gibbs Racing commenced at Auto Club Speedway, Trevor Bayne told NASCAR.com that he needed to win three to five of those races. Those may seem like lofty expectations, but when you step into JGR’s No. 18 Xfinity car, they are undoubtedly realistic.

Two races into his tenure and Bayne has come oh-so-close in both races. What may make them sting a bit more is that both races were likely winnable. Saturday saw Bayne earn another top five with a fourth-place finish.

At Auto Club Speedway, pit road could be pointed to for why he didn’t win. In the Phoenix desert, the pits were once again the main factor in why he didn’t get to fight for the victory.

Bayne’s weekend at Phoenix Raceway (March 12) started off on a high note, in which he won his first Xfinity pole in eight years. From there, Bayne would lead 38 laps, topping the 24 he led at Auto Club. That led to a nail biting finish to stage one, in which he would edge Noah Gragson for his second stage win in the two starts.

But in between leading laps and running up front was his struggles on pit road. After winning the first stage, Bayne lost four spots on pit road. After finishing fourth in stage two, Bayne radioed to his team that the next stop was the money stop leading into the final stage. Unfortunately, double trouble struck the No. 18 team. Bayne lost seven spots on pit road initially, but ended up getting hit with a speeding penalty to add insult to injury.

After starting at the rear of the field to begin the final stage, Bayne quickly worked his way back inside the top 10 by lap 123 of the 200-lap event. When the final round of green flag stops began with just over 30 laps to go, Bayne was nearly 10 seconds back of race leader Gragson. When everything cycled through, he was five seconds behind, the best pit sequence of the race for the team.

A fourth-place result may not have been what the Knoxville, Tenn. native was desiring, but he has proved a statement so far in his first two starts. In a car that won last time the series visited Phoenix when Daniel Hemric won the championship, Bayne gave the ride quite a showing despite just coming up short.

The simple fact is that if the team cleans up miscues on pit road, Bayne’s goal of winning three to five races could be attained.

Bayne was originally scheduled to have only seven races in the No. 18 Toyota in 2022. That number has increased to eight. During Saturday’s broadcast of the United Rentals 200 at Phoenix Raceway, it was mentioned that the Nalley Cars 250 at Atlanta Motor Speedway has been added to Bayne’s schedule.  That gives Bayne one more shot to put himself in the winning column.

I would think that losing 7 spots on the stop, probably lead to the speeding penalty.
Either way, if I had an under preforming Xfinity, or even a Cup team. I’d be wanting to talk to him.

For what a ride in the 18 most cost Gibbs should furnish a 1st class crew.

Sorry for the typo. Must cost