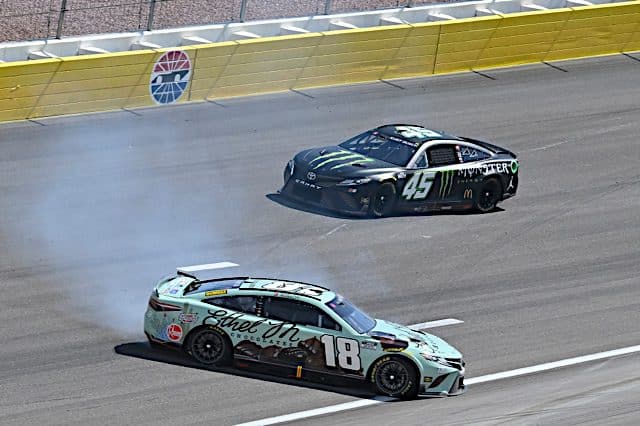 A couple of weeks ago, Mike Neff laid the groundwork for how to look at the season and the new car.  (Quick aside: have we figured out what the name of this machine is yet?  Next Gen?  Gen 7?  Sugar-Free Zero Gen?  Gluten-Free Gen 7 Next?)

Regardless of what the new car may be called, what we do know is that it has now been driven at two big non-restrictor-plate tracks and NASCAR racing has accompanied this situation.  That may seem like a mocking statement but this car brought a lot of anxiety over the past year and many voices made it seem like it would be the death of racing and that NASCAR had once again made an ill-fated decision and would look like fools.

And yet four straight race weekends have come and gone with the latest on-track iteration.  The story so far has been that the only stories are minor stories – and that actually follows the script that could have been written last summer.

See also
So It's a New Car

The script is a simple one and follows a long-standing pattern of cultural behavior.  The cycle goes something like this: some kind of change is announced; then people freak out; then change continues to happen; people continue freaking out; the change becomes part of the fabric of culture; people begin to accept and ignore that the change ever occurred.

Hereʻs a simple example to give the cycle some context.  In the 1950s, some guy from Tupelo, Mississippi put out a record that brought out ecstasy from some and vitriol and condemnation a wide base of Americans.  Joining this Elvis Presley at the front were the likes of Chuck Berry and Little Richard, full of brash energy and explicit lyrics.  None of them sounded anything like Pat Boone or Frank Sinatra and it thus made many people uncomfortable and spawned a serious backlash.

What happened is that over time, this new-fangled thing called rock nʻ roll, became normalized.  Sure, there are the odd flair-ups every so often, as can be seen in the 1960s, or with punk in the 1970s, and most certainly as rap became prominent in the 1980s.  And yes, the PMRC may have been created to police records with explicit language (see: Tipper Gore) but that did not deter record sales (and some say may have increased the sales of some albums).

The result is that, for all that panicking, rock/punk/rap did not stop, and eventually they have all become normalized facets of life.

Now put that in context with the 18-inch-wheel cars of today that don the NASCAR circuits and we see a similar concept.  The sky is falling.  The car is junk.  It is unsafe.  It looks stupid.  It is stupid.  It doesnʻt turn.  The blinkers donʻt work.

All of the hullabaloo about the flat-bottom rear-diffuser car lapping the track belies that panicking is almost the expected part of the process.  For all the naysayers and the criticism and the near wanton-failure of the car, the easy recognition would be to listen to who was not talking and what was not being said.

Say what you want about NASCAR, and having written for the sport for a number of years, many of you have no problem in doing so, but there are still smart people in the sport.  If the governing body rolled out of trash concept of a car but told the teams that the only way to race was to do so under those flawed guidelines, the smart people would still figure out how to do so.

Engineers do what engineers do, and that is to get crafty in figuring out ways to make things work under the provisions given. Immutable laws persist, like gravity, or the NASCAR rulebook, but engineers work to ensure that things work.

We did not hear much from the people behind the scenes, the ones toiling away on this latest racing billboard and maybe someone should have gotten more of their perspectives on drag, sideforce, downforce, tires, structural integrity, and a host of other aspects.

But that would have been too much.  Richard Hofstader pioneered a concept in American society when he published Anti-Intellectualism in American Life in 1963.  He noted that Americans were happy to avoid engaging in intellectual discourse in what appeared to be cycles–frequently tied to presidential eras.

However, what Hofstader drilled down upon is that Americans, frequently, would rather things be made simple rather than attempt to engage with material at a different level.  Hence, we get cultural cues that point toward the lowest common denominator.

When thinking about the new car, it appears that much of the rhetoric appealed to the LCD rather than aiming at going into full detail regarding its specs.  There is also reason to question why the NASCAR broadcasts do not have an engineer in the booth for broadcast purposes–surely there is one who is camera-friendly and plain-spoken enough to discuss the reason why so many drivers are having so much problem keeping the wonderful new part-scarce machine running in the right direction.

That leads to the last point.  The engineers will continue to tinker but a question about the racing product has now come to the fore.  Many drivers have spoken lovely platitudes about the new car and how difficult it is to drive and that it is twitchy and that there is a reason for the record number of cautions in the first three races of the season (39 is it?)

If there is one element that is being lost in the discussion of the new car it is whether making the car difficult to drive actually improves the overall quality of racing?  For now, that is something that will still be up for debate after such a small sample size.  The upcoming race at Phoenix could be a caution-free (save for stages) parade and will prove to show a different personality for the Next7GenCarRaceCar.  That would be great.  It also might not.

Cautions do not make for great racing.  Nor, however, does watching the leader check out by 4 seconds and the race becoming a mere distraction so that one can actually time how long it takes for paint to dry.

So maybe all the panic was for naught.  Maybe the engineers have done their job.  Now, maybe itʻs time for the drivers to show that they are, really, some of the best in the world.

The other issue with the new cars is the tires. Not having an inner liner at bigger tracks has been a real issue. Cars needing to be towed back to pit road is a problem with the time limits set on repairing cars.

This one is a classic! I’ll summarize for those who skip to comments: NASCAR drivers and fans, much like Mr. Hofstader’s “Americans” (and by Americans he means the conservative deplorable types) are too stupid to understand the complexities here and thus reduce their comments to the lowest common denominator. I wonder where else we hear that message these days? Nobody is panicking – but a person doesn’t need a grad degree from Columbia to realize having 18 inch. 200lb wheels flying off at speed is a serious problem, and that needing a tow for a simple flat tire is unacceptable. Can’t wait to read the dissertation.

I agree that Ava talking down to us. I’d like her explanation how smart engineers are going to figure out how to get those cars with flat tires and no inner liners back to pit road without tearing up a whole side of the car or using a wrecker. The sky is falling on this point Ava and you seemed to have missed it completely. As far as the cars racing on the track, leave them alone and let the real racers figure out how to race the car they. Those who are just drivers can fend for themselves.

Cautions will come down as drivers and teams gain a better handling over the car. Let’s be thankful the cars are more about the drivers now…

I have been a mechanical engineer for over 25 years and served in multiple engineering disciplines such as design engineering and new product development. I cannot stress what an undertaking it is to design a new car from the ground up. It starts with concepts followed by creating new 3D model piece parts and then assembly. The assembly portion will tell you if you will have interference fits, and other issues before a single part is manufactured. After all of those kinks are worked out, the finite element analysis begins to look for weak points, aero, etc.. Once this process is completed changes will be made to improve performance, safety or reduce cost. Engineering requires forward thinking, and every good engineer will attempt to think of everything that “could be” an issue. Sometimes an issue is missed, other times a change is not done due to cost. A brand new race car design is extremely dynamic which can pose many issues (I can’t stress this enough).
In regards to the flat tire wheel issue, I question if this was even on their radar. We will never know the amount of testing that was done by spinning a car out (real time) and dealing with flat tires but I have a feeling that this problem did not come up that often for the issue to be observed.
I have full confidence nascar and Goodyear are looking for a solution to keeping wheels turning after flats however this will not be resolved in only (4) races. Again, this requires engineering to go back to modeling, creating new molds and testing. A knee jerk decision can be deadly and needs to go through the proper thought process.
Ava, I welcome you to try to design your own car, get supply chain involved, meet all the specs, and finally build one and see how it turns out for you since you appear to know more than experienced engineers.
Overall, I have to give credit to the engineering departments as this is the best car designed since the original COT. It may not be perfect and no car will ever be perfect but it’s been decent (4) races in. The weak links will eventually be resolved such as the wheels, and transaxle.