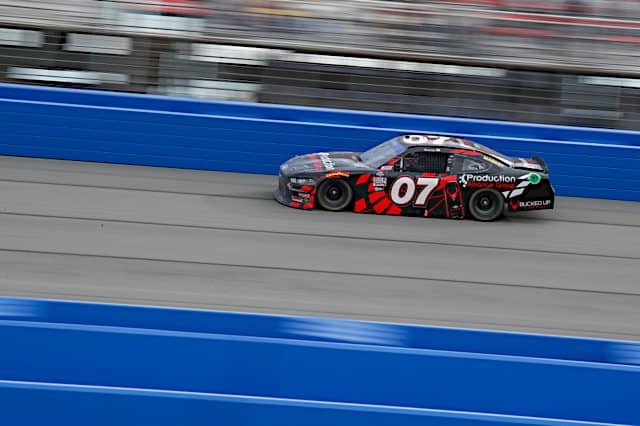 “Man, it was just an awesome car,” Custer told FOX Sports. “That thing was just a rocket ship all day.”

Custer, who competes for Stewart-Haas Racing in the NASCAR Cup Series, won the race driving the No. 07 for SS Green Light Racing, who has an alliance with SHR this year. The win was the first ever for SS Green Light and owner Bobby Dotter in 321 Xfinity starts.

“I can’t thank Bobby Dotter enough, I mean everyone who was involved on this car, Custer said. “It was just unreal how fast we were. … It’s awesome to win at home, so I can’t wait for tomorrow.”

AJ Allmendinger started on pole but was knocked out early on while Bayne, in his first NASCAR race since the end of the 2018 season, won the first stage. From there it was all Custer as he won the last two stages and made it through three overtimes to claim the victory in Fontana to start the Xfinity Series’ West Coast Swing despite losing 18 total positions on pit lane.Custer, Bayne, Gragson, Josh Berry and Alfredo made up the top five when the dust cleared.

Landon Cassill got things started early when his car exploded into flames on lap 7 to bring out the first yellow. Ty Gibbs went for a spin racing for the lead just before stage 1 ended, but he would recover to take the lead by lap 129. only to lose it to Gragson with 20 to go.

The first overtime was set up with a Mason Massey incident at lap 142, then Ryan Vargas spun to set up the second overtime.

The last of those overtimes came when Brandon Jones and Sheldon Creed got involved in a fiery incident in the frontstretch which resulted in a red flag and another test for Custer, a Cup Series regular, getting his first start in the Xfinity Series this season. It came with race sponsor Production Alliance Group on the hood.

Alfredo had the freshest tires late in the race and charged from the back of the lead lap to challenge for the lead as the overtimes racked up. Gragson also made a charge on the final restart but was unable to get to Custer, who pulled away to take the victory.

Trevor Bayne describes what his expectations were entering today’s race as well as how different this car drives than from the last time he raced in the Xfinity Series.#NASCAR pic.twitter.com/sZqKXyzFSD

Custer crossed the finish line at 8:46 EST. It does not bode well for the Cup entrants. Should there be a prop bet on how many laps the tires last? What will NA$CAR’s excuse be for the “Competition Caution” TV time out?