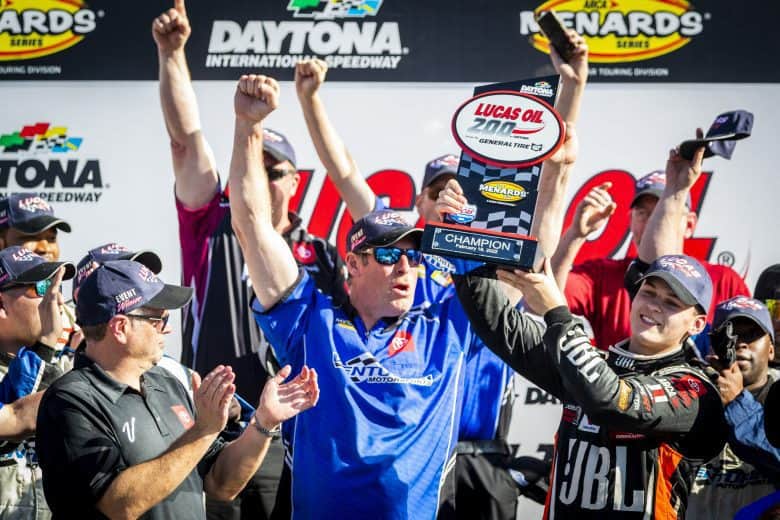 Heim’s teammate Parker Chase finished runner-up to Heim. It was Chase’s career-best ARCA finish. Both Heim and Chase are running part-time slates this year for Venturini.

Toni Breidinger tied her career-best ARCA finish of ninth place. All Venturini drivers finished inside the top 10, an impressive feat in a 36-driver field.

Breidinger is the lone full-time driver at Venturini. She is the first Arab American woman to drive in ARCA and boasts hundreds of thousands of followers on her Instagram page and over 1 million on TikTok; a bigger social media presence than most NASCAR Cup Series drivers. Breidinger also one of the inaugural members of The Accelerate Her program by Anheuser-Busch.

P9 today for @ToniBreidinger as she gets set for the rest of the season with @VenturiniMotor and @ToyotaRacing.#NASCAR #ARCA pic.twitter.com/L6spcyvIjV

As Chase noted in a post-race team release, “The objective here today was to have a Venturini car win, and we succeeded at that. Five in a row for Venturini, which is incredible. That’s what we came here to do.” Rest assured, Venturini has that same game plan for the other ARCA superspeedway race this season at Talladega Superspeedway.

To win at Talladega, the other competitors will need to befriend each other. Part-time ARCA competitor Andy Jankowiak already is chasing the trophy.

@DAYTONA In the books 📚

Had a great car all weekend

Super proud of my team and all the people involved in keeping the story going!

Let’s chase some checkered’s this year! 🏁🏆

Even with teamwork among the other drivers, Venturini will be tough to beat at Talladega. Team co-owner Billy Venturini loves collecting trophies.

While Breidinger finished ninth after pacing the ARCA field in its practice session, she wasn’t the top finishing full-time driver. Those honors went to Daniel Dye, who finished third in his first race at Daytona.

Yes, it’s only the first race of this 20-race season, but for Van Alst, it wasn’t a good start in his endeavor to run full-time.

Although Smith wasn’t expected to contend for a title, his 25-point gap didn’t get his underfunded team off on a high note.

Meanwhile, Chase, Jankowiak, and Sean Corr were three of the drivers who earned their ARCA career-best finishes.

Where does that leave the field heading into Phoenix Raceway, then? Phoenix will be a combination race with the ARCA Menards Series West, so these ARCA drivers will battle at the 1-mile track with the West competitors.

In addition, Sanchez will be running double-duty at Phoenix, so he’ll be eager to run well after a DNF in the ARCA Phoenix race last year.

Nick Sanchez said his first Xfinity race with BJ McLeod Motorsports will be at Phoenix.

Drivers at least 15 years old can compete in it, so this Phoenix race will welcome Jesse Love, Taylor Gray, and Sammy Smith back into the main ARCA competition. These ARCA drivers add a new dynamic to the race.

When ARCA ventures across the country this season, teamwork from other teams needs to happen. Otherwise, Venturini won’t be chasing the trophies; they’ll be heading home with them.