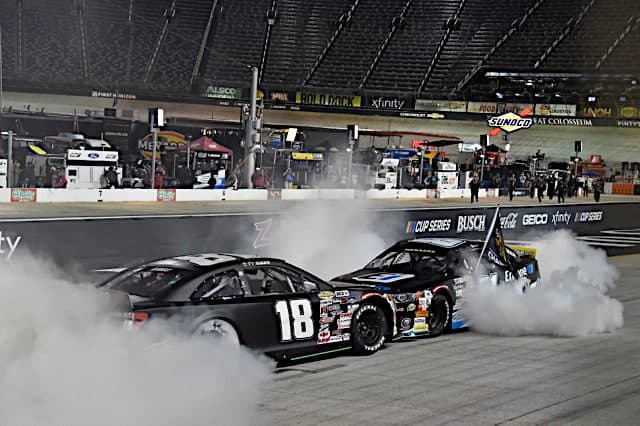 SALEM, Ind. — With only one race left in this ARCA Menards Series season, drivers and teams are looking ahead to 2022. In ARCA silly season, there are a few known pairings, still many questions, and those hopeful of running a full-time schedule.

Ty Gibbs essentially has won the ARCA championship this year, and he presumably is moving up full-time to the NASCAR Xfinity Series next year. Joe Gibbs Racing won the owners’ championship last year and likely this year, and with the TRD pipeline, the team may continue that trend next year.

It was previously reported Gibbs would split the No. 18 with Sammy Smith until Smith turns 18 on June 4. However, at Salem Speedway, a JGR spokesperson told Frontstretch he does not think Gibbs will compete in ARCA next year.

“We are still in the process of working through our plans for the ARCA series in 2022, so I’m not prepared to confirm anything at this time,” the spokesperson said.

Smith won the ARCA Menards Series East championship last month, capping it off with a second-place finish in the ARCA and ARCA East combination race at Bristol Motor Speedway.

“Probably just run all the ARCA races I can in the No. 18 car with Mark [McFarland, the crew chief],” Smith told Racing News Now. “I’ll probably miss a couple just cause of my age but probably just run as many as I can to get as much experience as I can. I’ll probably run both ARCA and ARCA East. I feel pretty good about it.”

The other ARCA Toyota team, Venturini Motorsports, has both answers and questions about its driver lineup for next year. Corey Heim is second in the points, but his future publicly is unknown. Heim told Frontstretch he knows his plans for next year, but he cannot reveal them yet. During the Salem race though, MAVTV may have reported his plans.

.@MAVTV mentions that @CoreyHeim_ will be going racing in the NASCAR Camping World Truck Series next season.

Heim has one scheduled NCWTS event left this season, the series' next event at @MartinsvilleSwy, driving the No. 51 for @KBMteam.#ARCA | #NASCAR

Of the other drivers in the Venturini camp, sources have confirmed to Frontstretch that Gracie Trotter will return to the organization, but her schedule is unclear. She joined the team this year for a part-time campaign and has reeled off two top fives, with a career-best finish of third place at Elko Speedway, and five top 10s. Her father, Tony Trotter, owns Calico Coatings, a sponsor on her car this year, so she brings funding.

Even if Love wins the West title this year, he will not go for three in a row in 2022. Yep, he confirmed to Frontstretch he will not be running the full West slate, and while he expects to run main ARCA races next year, he does not know his schedule.

Drew Dollar ran full-time in ARCA last year, then a part-time run this year. His representative told Frontstretch that discussions about Dollar’s 2022 plans are still ongoing.

On the Chevrolet side of the ARCA garage, Rev Racing already announced it will field two full-time entries next year for Rajah Caruth and Nick Sanchez. Sanchez has run most of the ARCA races this year and Caruth ran ARCA East full-time.

Next year should be an improvement for the team, Sanchez believes. Currently tied for the third-most top fives this year, albeit without a win, Sanchez has driven the No. 2 without manufacturer support, something Rev Racing will receive in 2022.

“We’re building a pretty good foundation for next year,” Caruth told Frontstretch. “The goal is to run all the laps and keep learning. I would love to be upfront and be competitive, but I do not want to rush anything because I am still very inexperienced compared to the people I am racing against. Hopefully, that means running up front and leading laps, but if not, that’s ok as long as I’m not tearing up race cars or running near the back.”

GMS Racing is the other Chevrolet-backed ARCA program. Former ARCA team owner Chad Bryant joined the team this year, and he has guided the team’s No. 21 to one win, four top fives and nine top 10s in 14 events. Bryant confirmed he will be back with GMS in ARCA next year.

GMS should announce its ARCA driver for next year soon.

“It’ll be someone familiar with the organization,” Bryant told Frontstretch.

The top candidate is Daniel Dye, who joined GMS during this season. The move immediately paid dividends as Dye whooped the field at Berlin Raceway en route to winning in his second main ARCA start.

Taylor Gray will run for both the East and Showdown titles. Other than him though, Ford has not announced anymore of its ARCA lineup.

Who else will be a regular sight in the ARCA field next year? Brad Smith confirmed he will return, only 16 career starts shy of 400. Smith praised the ARCA ABC program, aka start money, saying it makes 30% of his yearly budget.

Will Kimmel and Scott Melton will continue to pair up to field the No. 69 next year. Kimmel earned the best finish of this season at Salem, fourth, and they have a combined four top-10 finishes. Why do they work together?

“It’s where we’re at and want to be,” Kimmel said.

At Michigan International Speedway earlier this season, Greg Van Alst told Frontstretch he will compete in ARCA again next year. According to sources, Van Alst intends to run full-time, though he only said his schedule is dependent on funding.

After his wreck at Michigan sidelined him for the year, Tim Richmond will be back racing ARCA next year in likely 10-12 races. His family-owned team has run full-time this year, and they would like to continue to do so next year. Nineteen-year-old Zachary Tinkle has filled in as the driver in Richmond’s absence, and both Tinkle and Richmond are hopeful that Tinkle will fill out the balance of the 2022 schedule for the team. Ideally, Tinkle wants to run full-time next year, splitting the season driving for Richmond and Wayne Peterson.

As the 2022 ARCA season opener approaches, more announcements about the ARCA driver lineup will be released, but 2022 should crown the 16th straight different ARCA champion.

On a serious note, I would expect Nick Sanchez to be the 1st Miami Born and Raised Racer Since Darrell Gwynn to Win in a Major Motorsports Series. I’d feel that ARCA would have to raise their Car Counts Full Time, too, instead of falling for Schlock.

I think that @Tony Lumbis, the more we degrade something, the less important it becomes. As more younger cellphone addicted people are watching, the less they care because of insidious commenting on the internet. How about we build it up instead of making negative comments. Sure, Gibbs has made a joke of it this year but did they say that when Frank Kimmel was winning everything? No. Simply because people didn’t spend their time texting and instead actually went to races. Let’s build them, not tear them down. The Nazis tore a lot of stuff down and where did it lead?