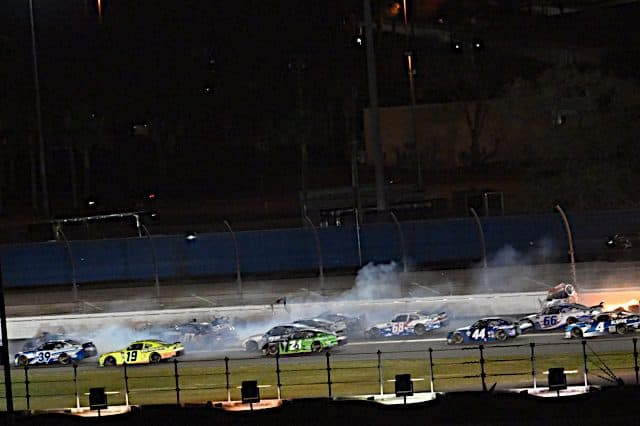 Myatt Snider was simply happy to emerge unscathed, overshadowing what was the most competitive Daytona Speedweeks race to date in 2022.

A horrifying last-lap wreck brought the race to an end half-a-lap early, Snider’s No. 31 going airborne and tearing into pieces on the backstretch wall. As the field wrecked behind the leaders, Hill edged ahead of AJ Allmendinger just before the caution came out to take the victory.

It was the first win for Hill in just his 16th Xfinity start as he competes for the Rookie of the Year award. Allmendinger wound up second, followed by Noah Gragson, Riley Herbst and Justin Allgaier.

However, all eyes were on Snider after a wreck so vicious the engine detached from his No. 31 Chevrolet. After contact with Anthony Alfredo, he was launched into the air helpless, started flipping and slammed right into the backstretch wall.

"Where is the engine?"

Thankfully, the driver emerged with no major injuries although the track can’t say the same for its backstretch catchfence.

“I can’t profess enough how glad I am that I’m all good,” Snider said. “I’ve never actually flipped in a race car. That’s kind of wild to think.

“Great place to do it at Daytona.”

The second half of @MyattSnider after the race.

“It was violent. I saw sparks going everywhere.”#NASCAR #Beef300 pic.twitter.com/CLRxSev6jj

Snider was complaining of some minor injuries on his left leg, specifically the left foot, but says “he’ll be fine to race” next week.

It was a wild finish to a race whose first half was dominated by pole sitter and reigning NXS champion Daniel Hemric. He led all but one lap of stage one, then worked his way up after losing track position during a pit cycle to capture stage two. However, a caution-flag pit stop for a vibration killed his chances in the final stage; it turns out bare bond had gotten stuck on a tire to make it feel like there was a flat.

Moments later, a 10-car wreck started by CJ McLaughlin losing control would involve Hemric and take him out of contention. Joey Gase had a scary moment in that one, coming mere feet from crew members who had to scatter as he slammed the inside wall on pit road.

Look at the wreck that started when CJ McLaughlin got loose. Hemric was involved.

“We were trying to stay out of the Big One and then I caused it,” McLaughlin said. “I feel bad for tearing everyone’s stuff up. I just got aero loose, tried to correct it and then came back and cleared everyone out. My own fault.”

The incident left Allmendinger in position to capitalize, leading 17 of the final 22 circuits. But he couldn’t hold off Hill when it counted, falling short with a second straight runner-up Daytona finish as he seeks his first pack racing victory.

Behind Richard Childress Racing teammate Hill, Sheldon Creed came home sixth, followed by Alfredo, a miraculous recovery to seventh after losing his right-side window at the start of the race. Independent Ryan Sieg wound up eighth, followed by a career-best result for Josh Bilicki in ninth. Brandon Brown rounded out the top-10 finishers.

The NASCAR Xfinity Series is back in action this coming Saturday, Feb. 26 at Fontana. FOX Sports 1 will have coverage starting at 5 p.m. ET.

NASCAR has spent a couple of decades researching why cars get airborne and finding ways to keep them on the ground. What, if anything, went wrong in this incident?