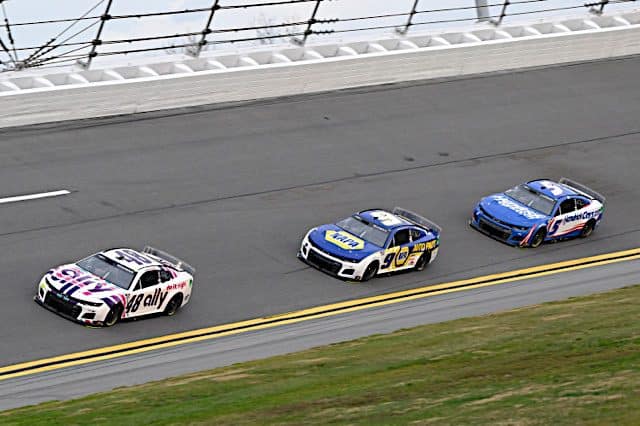 Entering a season with so many new and unknown variables, one thing stayed constant: Hendrick Motorsports qualified on the front row for the Daytona 500.

In fact, all four HMS cars qualified inside the top five on Wednesday, with William Byron taking third and Chase Elliott fifth. Aric Almirola‘s Stewart-Haas Racing Ford was the only car capable of breaking up the HMS parade at the top of the board, qualifying fourth.

Winning the Daytona 500 pole is nothing new for HMS. The organization has now accomplished the feat seven of the past eight years. The lone time it didn’t during that span was in 2020 when Ricky Stenhouse Jr. captured the top spot driving for JTG Daugherty Racing, using a Hendrick engine to do so.

But for all the speed HMS has showed at Daytona International Speedway and all the success the organization has enjoyed across the Cup tour in recent memory (including the past two Cup titles), Hendrick hasn’t won the Daytona 500 once during that span.

2014, oddly enough one year before the streak of poles started, was the last time an HMS entry won the Daytona 500. NBC hadn’t even made its return to broadcast the series yet, as its analysts Dale Earnhardt Jr. and Steve Letarte worked together to put the No. 88 in victory lane on that super late night in Florida.

Eight years doesn’t feel like that long of a drought. It’s been 11 years since Trevor Bayne won, and I wouldn’t say Wood Brothers Racing is experiencing a Daytona 500 drought. Even seven years winless for Team Penske doesn’t feel like long. But eight years is a long time for the most successful team in the garage, which has a rich Daytona 500 history and has turned out the fastest laps during said drought.

After all, Hendrick won The Great American Race in just its third attempt, taking the 1986 edition with Geoff Bodine. The team since went on to win eight Daytona 500s, second all time only to Petty Enterprises’ nine.

When Jeff Gordon ended that drought in 1997, winning his first of three Daytona 500s, he was two years removed from his first title and was fresh off a close championship loss to HMS teammate Terry Labonte. Sounds similar to how Elliott won the 2020 title and lost last year’s to Larson. On top of that, Gordon had a 10-win season in 1996, just like Larson did last year.

1997 was the last time HMS entered a season without a Daytona 500 winning driver on its roster until last year following Jimmie Johnson‘s NASCAR retirement. That 1997 lineup of Gordon, Labonte and Ricky Craven went on to finish 1-2-3 in the Daytona 500 that year. Could we see history repeat itself with this year’s squad? This year’s Hendrick cars certainly have the speed to do one better and finish 1-2-3-4.

Based on what we’ve seen and heard so far about the Next Gen cars (this was written before the Duels), this weekend could be HMS’ best shot at the top-four sweep in quite a while. It seems like the draft won’t help as much and the race will end up with mini packs like there were back in the 1990s on superspeedways. It won’t have the entire field stacked three-wide on top of each other like has been the case at superspeedways in recent years. If it’s like this, then engines will matter a lot more than with the Gen 6 car, which will play right into HMS’ hand. The Big One will probably prevent Hendrick from an opportunity at the sweep, but a win could be on the horizon.

Rick Hendrick said last November that this current lineup of drivers and crew chiefs is the “best we’ve ever had.” That’s coming from a car owner who has fielded cars for Hall of Famers Waltrip, Gordon, Labonte and Earnhardt and future Hall of Famer Johnson — he had three of them at the same time. He’s had Ray Evernham, Chad Knaus, Jeff Hammond and Harry Hyde as his crew chiefs. With all the ultra talented lineups Mr. H has had over the years, is this one really the best?

Well, last year, this current HMS lineup was one win away from winning half of the races in the season. These four drivers will certainly win more races down the road, and more championships wouldn’t be a shock either.

But to truly be considered among the best in NASCAR, you’ve got to win the Daytona 500. Michael Waltrip, Ward Burton and Jamie McMurray all only won a handful of times in their respective Cup careers, but they’ll forever be remembered for winning Harley J. Earl trophies. Michael McDowell and Bayne only have one career Cup win each, but they cemented their place in NASCAR lore by winning the Daytona 500.

If this current lineup is truly to be considered the best the team has ever fielded, then they’ve got to win some Daytona 500s. And this could be the year that it starts.

It is unlikely that Hendrick or any Chevrolet teams will win the 500
First the Fords and Toyotas both have better drafting skilled drivers.
The Fords seem to have a better package for Super Speedway racing and the Toyotas stick together to stay near the front. The Chevy teams especially Hendricks seem to make more bone head pit calls that keep them from staying competitive at the end of the races. They are fast in qualifying because of low drag set ups but his doesn’t help drafting.

Ah, let’s consider how professional sports, at least some, put a rather large thumb on the scales.

Did you watch the end of the Super Bowl and the questionable defensive holding that put the ball first and goal at the 1 for the Rams?
Or, in the first KC – Cincinnati game the three consecutive pass interference penalties that led to a Bengal score?
Chase Elliot’s bumper cover flapping in the breeze at the Roval?

Of course if a Hendrick car is in position and the thumb needs to appear, they could – as long as they don’t wreck. Of course, it could rain while one was out front and they could call it.

Rick Hendrick is the only owner in NASCAR to have plead guilty to Mail Fraud as part of a Bribery Scheme and then contributed to the Clinton Library for a pardon. Anything is possible.

That should get folks looking for the black helicopters and blue helmets!

What? Next you’re going to tell me NASCAR throws caution flags to benefit certain drivers, or that they use pit road speeding violations to handicap a fast car that is not supposed to win (or a driver who has not properly toed the line and needs to be taught a lesson). Then there will be claims NASCAR has gone out of their way to obscenely punish a lower tier team over the most minor infraction while looking the other way when bigger teams blatantly break the rules? Is it true Jr. was given a less restrictive restrictor plate at Daytona in July 2001 too? NASCAR manipulate/interfere with races? Surely not!

Hope I didn’t break anyone’s sarcasm detector with that one! ;-)

I hope not. I’ll pull for anybody but a Hendrick team.

While the article was written before the duels, I’m writing this after. As in past years, the Hendrick Chevy’s have been fastest in single car qualifying. Now that the duels have been run, we know that just like the last few years, the Fords are fastest in the draft.

Funny how four years of development, and all kinds of promises about parity, the Next Gen car doesn’t seem to have changed anything. The Chevy’s are fast by themselves, the Ford’s are fast in a pack, and it’s still pretty tough to pass, especially with a restrictor plate (or whatever they’re calling it now).