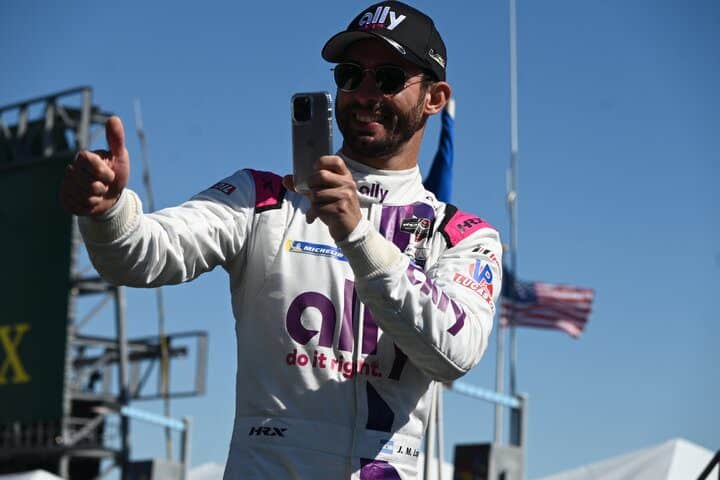 Action Express Racing announced Thursday morning (Feb. 17) that Jose Maria Lopez will join Kamui Kobayashi and Mike Rockenfeller in the No. 48 Ally Cadillac in next month’s Mobil 1 12 Hours of Sebring, the second round of both the IMSA WeatherTech SportsCar Championship and the Michelin Endurance Cup.  The reasoning for the move is something that will be a constant refrain in the next couple of weeks.

The Mobil 1 12 Hours of Sebring is the same weekend as the NTT IndyCar Series Xpel 375 at Texas Motor Speedway.  The race is scheduled to start at 11:30 a.m. local time on Sunday, 14 hours after the 12-hour race is scheduled to end.  Jimmie Johnson is scheduled to race in Texas Sunday afternoon.  Effectively, this is the same situation that led to Ryan Hunter-Reay joining Chip Ganassi Racing in place of Scott Dixon earlier this week.

For Jimmie Johnson, it is even more important that he gets track time at Texas Motor Speedway prior to the Xpel 375 than Dixon since he’s never raced there in an INDYCAR.  Despite his 35 starts at Texas in the NASCAR Cup Series, where he earned seven wins, 16 top five and 22 top 10 finishes, Texas is a completely different beast in the NTT IndyCar Series, especially since the track laid down the PJ1 TrackBite in an attempt to make NASCAR races there more competitive.

“I was really looking forward to going back and racing the Ally Cadillac at Sebring,” Johnson stated.  “We had a great run there last season and were in contention for the win for most of the race.  Jose María is an excellent driver and he will do great.  I know the team’s experienced and they can get the Ally Cadillac up on the podium – hopefully the top step.”

Lopez does have previous experience at Sebring, having competed there for Toyota in the inaugural 1000 Miles of Sebring in 2019.  He finished second overall that evening.

“[Driving for Action Express Racing in Sebring] is a plus,” Lopez stated in a press release.  “I was planning to be in Sebring anyway.  Unfortunately, Jimmie [Johnson] isn’t able to do both INDYCAR and IMSA at the same time.  I will be there for the first WEC race.  We race on Friday with Toyota and then I will cross the garage and race on Saturday in the Ally Cadillac.  I am really thankful for the opportunity to drive again with Action Express Racing and hopefully me, Mike and Kamui can deliver a good result.”

For Action Express Racing team director Gary Nelson, this was something that the team had in their back pocket, just in case.

“We have had this contingency plan in place since INDYCAR announced their schedule and we saw that there would be conflict with their Texas event,” Nelson stated.  “It was really an easy decision to bring in Jose María.  He ran with us at Daytona, did all the testing leading up to the Rolex, so slotting him in was a no brainer.  He and Kamui are running the WEC race as well.  But, they are fit, and I think the extra laps at Sebring can only help us come race day for our Ally Cadillac effort in the 12 hour race.  We will miss Jimmie and wish him all the best in Texas.”

Last year at Sebring, Johnson had trouble in qualifying, spinning out once in turn 16.  He recovered from that spin, then immediately crashed the car in Sunset Bend.

After the team made repairs to the No. 48 Cadillac DPi-V.R. overnight, they came back and ran competitively in the race before finishing third on the road.  Unfortunately, they were moved to the rear of the DPi class after a drive-time violation was discovered.  The maximum drive-time of four hours in a six hour period is in effect at Sebring and Simon Pagenaud was in the car for 50 seconds too long in a six-hour period during the race.

As Lopez noted, the SuperSebring weekend is back for 2022 after being cancelled the past two years.  The FIA World Endurance Championship is scheduled to start their 2022 season with the 1000 Miles of Sebring on March 18.  Lopez is scheduled to drive the No. 7 Toyota GR010 Hybrid for Toyota GAZOO Racing in the race, alongside Kobayashi and Mike Conway.

As of this writing, there are a small group of drivers that are confirmed to drive in both the 1000 Miles of Sebring and the Mobil 1 12 Hours of Sebring.  All three drivers of the Ally Cadillac are in that group.  In addition, Felipe Nasr will be in both races, along with Inception Motorsports teammates Brendan Iribe and Ollie Millroy.

really? no big loss there.
heck they could put danica in the car.
she’d do just as well as jimmie.
maybe better.