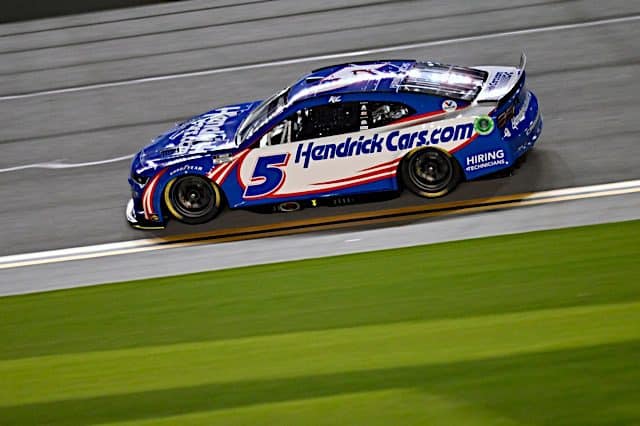 ”It’s really neat,” Larson told FOX Sports after qualifying. “It makes me just, I mean, anytime, I think you’re really proud of your team to get a pole here because this is the littlest that has to do with us drivers in this qualifying at superspeedways. Just a huge thank you to the engine shop at Hendrick Motorsports, everybody who’s had a part in touching these vehicles, whether it be on the computer, engineering, or just hands on. It’s really neat. Just awesome the speed in our Hendrickcars.com Chevy and hopefully this is the beginning of a really good weekend.”

His Hendrick Motorsports teammate Alex Bowman was second quickest at 181.046 mph, earning his fifth-straight start on the front row in the Great American Race.

Daniel Suarez and Villeneuve failed inspection twice before qualifying, so a crew member will be ejected for this week as a result.

The Bluegreen Vacations Duels begin on Thursday (Feb. 17) at 7 p.m. ET to set the rest of the Daytona 500 lineup. Cup teams will then have two additional practices, one each on Friday and Saturday. The Great American Race airs on Sunday, Feb. 20 at 2:30 p.m. ET on FOX.

Hendrick’s cars are up front, followed by all the other top tier reams, then the traditional mid pack teams, and finally the independents and other regular back markers. So in the end, the Next Gen car didn’t change anything. The promised parity of common parts, and a new car that everyone was going to have to learn, only proved once again that money and experience will come out on top almost every time. Is anyone really surprised by this, other than maybe the powers that be in NASCAR?

I agree with you, money buys speed (and the best drivers) will always be the case.
I will just say that there will be a greater degree of parity in the short-run and then an ever increasing gap between the haves and have-nots as time goes by.

Bubba didn’t “win” the pole? I guess he isn’t rated the same as Danica.

I will be interested to see what the speeds are when they return in July. By then the engineers will have had six months to figure out how to make them go faster. If I had to wager I’d guess it won’t be long before they are flirting with 200mph again and NASCAR will be looking for ways to slow them down.

I’ve got a feeling they can do over 200 but these are the speeds NA$CAR wants as of now. If the old cars could do 210 then these should be faster. I thought they did tests with no plates years ago and it scared them.