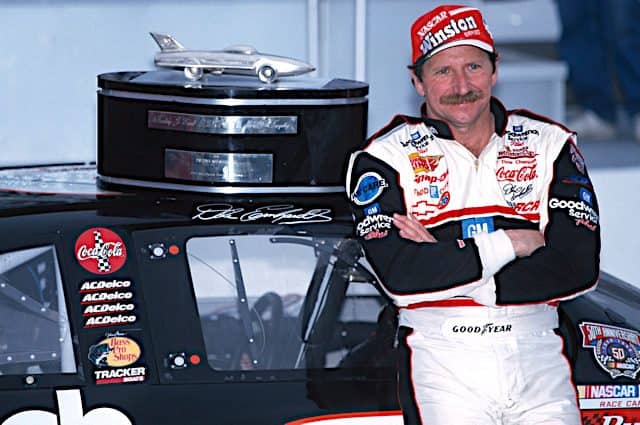 They said he could see the air.

So legendary was Dale Earnhardt’s prowess at Daytona International Speedway, perhaps that was the only way others could explain it.

Nobody did it better.

Can you argue whether Earnhardt is the best superspeedway racer in Cup Series history? Maybe. After all, Richard Petty won the Daytona 500 seven times, and the King has 12 total points-paying victories at Daytona and Talladega Superspeedway combined; Earnhardt had 13. That’s close.

Earnhardt won with both unrestricted engines and restrictor plates, while Petty’s last win came before the plates cut power and changed the game.

But when it comes to Daytona, Earnhardt can’t be touched.

His first points win at the superspeedway in the Cup Series didn’t happen until 1990, though he finished in the top 10 in almost three quarters of his starts there (73.9%). Denny Hamlin has three wins at Daytona, the only active driver to match the Intimidator. But Earnhardt was conquering the high banks before Hamlin was even born. His first win in the Bud Shootout came in 1980, some months before Hamlin’s appearance.

And then came restrictor plates.

The plates were added to the intake manifold to slow the cars down when speeds became dangerous at Daytona and Talladega. NASCAR used them at those two tracks — and one disastrous attempt at Loudon that’s another story for another day — until 2019 when the tapered spacer took their place. They generally meant bigger packs of cars and an even greater need to know exactly when and how to make a move late in a race because throttle response was drastically reduced.

Plate racing changed the game and Earnhardt ate it up.

Look again. Earnhardt won his qualifying race for 10 years in a row. He opened the Xfinity season with a win five straight times.

The Daytona 500 was elusive for Earnhardt, with what looked like sure victories snatched away in the closing laps on many occasions. Perhaps most famously, he cut a tire in the final turns of the final lap while leading the field in 1990, only to hand it over to Derrike Cope, a driver who had never won a Cup race anywhere before. All the while, Earnhardt was winning everything else he could at Daytona, sealing his legend there and making his name synonymous with the World Center of Racing.

The win, when it came in 1998, was recognized not just by Earnhardt’s team and fans, but by everyone in the garage for what it was: the capstone of what was already the biggest display of dominance at one track in recent history. They all knew what it meant to the sport. They all knew what it meant to Earnhardt. And it made for one of the most sentimental victory celebrations NASCAR has seen.

There are other drivers who never won the Great American Race, including Hall of Famers. There are drivers with more Cup wins at Daytona. Quite a few of them actually, including fellow seven-time champion Petty, longtime rival Jeff Gordon and Dale Earnhardt Jr.

But it’s Earnhardt whose collective record cements his place in Daytona lore.

It’s both ironic and somehow fitting that Daytona is also where the legend ended, in one tragic moment on the final lap. Maybe it was a block (the only two cars in front of Earnhardt when the crash happened were cars he owned) and maybe it was a peek to see if there was a move to be made. Maybe it was simply the air making the cars so unstable that a touch was all it took.

It happened so fast.

It was the hours after that stretched impossibly long, before the words nobody wanted to hear.

They said he could see the air. Maybe they were right.

Author’s note: It seems like it was only yesterday, doesn’t it? This space takes a closer look at some of NASCAR’s most memorable (and sometimes forgettable) moments. Yesterday might refer to the beginnings of NASCAR as we know it, or it could be last week, because not every memory is forged in the distant past. We’ll take a dive, by the numbers and by the memories, into all things racing: champions and the tracks they conquered, dominant performances and one-hit wonders, old and new, victory and defeat. Together, these make NASCAR.

IMHO it is a tight race for the Cup Series between he and Richard Petty. I just think how many more wins might he have gotten.