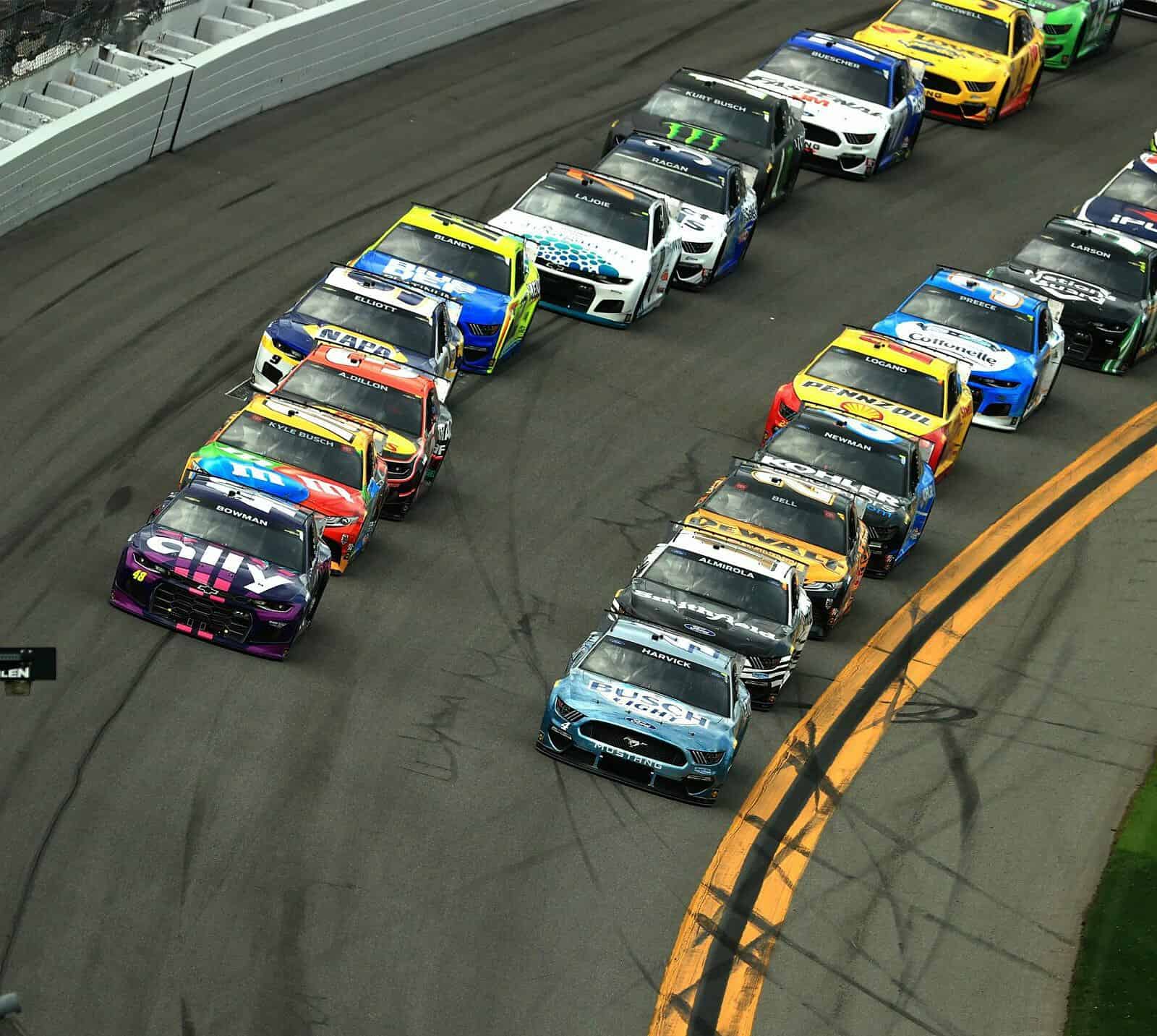 Now, arguably the biggest year for NASCAR since 2001 is ready for its opening (points counting) act.

Which means it’s time to lay out some ground rules.

No, we don’t mean rules that are enforceable by any ruling body (unfortunately).

These are guidelines (along with some demands) intended to make the 2022 NASCAR season as pleasurable and productive as possible for everyone.

These 12 rules cover everyone from fans to broadcasters and NASCAR executives.

12. Don’t overreact. 2022 is a special year. The Cup Series has a history-making car that no one knows how it will perform any given week. Just because someone looks reasonably good at Auto Club Speedway doesn’t mean we should christen them as a dark horse playoff contender.

11. Do not call the first three drivers who win more than one race the “Big Three” (But “Terrific Trio” is fair game).

10. Dear FOX Sports and NBC Sports, on-board cameras have been around for more than 30 years. Stop treating them as if you just discovered them. We’re missing the action.

8. Please, please stop calling Truck Series drivers “truckers.” (Related: If we hear “we’ll keep on trucking” one more time, we will turn this car around.)

7. You’re allowed to go one race without mentioning Byron’s history with iRacing.

6. Country music artists who perform pre-race concerts or the National Anthem are not required to be called “stars.” They’re just whoever the track could afford.

5. The term “playoff implications” is off limits until August.

4. Do not take NASCAR Twitter as an accurate reflection of the majority of the NASCAR community. It’s an echo chamber.

3. Sponsors of the defending Cup Series champion  — in this case, Larson with HendrickCars.com and Valvoline — must produce at least one national TV commercial (aired during and outside race broadcasts) showing off how proud they are to back NASCAR’s champion. This rule is instituted after Chase Elliott‘s sponsors — NAPA, Hooters, Llumar, Unifirst and Adrenaline Shoc — were MIA on America’s airwaves during Cup broadcasts in 2021. Sure, you get value from making videos for social media, but see previous item about Twitter and reality.

If you need pointers, we recommend the ads from Advance Auto Parts and Mahindra Tractors that aired during the Busch Clash.

2. Do not say, under any circumstances, the following: “The racing was better in the ’90s/early 2000s” or “NASCAR died with Dale.” That was more than 20 years ago. If you’re still watching and complaining, that’s a you problem.

1. NASCAR CEO and Chairman Jim France must give one press conference or an interview with a media outlet that is not directly tied to NASCAR. He assumed his position in August 2018 after Brian France stepped down following his arrest for a DUI. In the roughly four years since Jim France took over, he has not given a formal interview or provided an on the record comment outside Hall of Fame ceremonies or statements about a notable death in the NASCAR community.

This is arguably one of the most important years in NASCAR’s history. While you can safely assume that President Steve Phelps doesn’t say anything without France’s approval, Phelps is not a France.

The NASCAR community deserves to hear from Jim France himself.

Regarding #9, “Willy B” the same must apply to all other immature nicknames: “Young Ryan Blaney” and the worst of all (ever), “Yung Money.” For the love Big Bill France, please burry these references in the dust bin. If Blaney wants to brand his merch with “YRB” that’s on him, I just won’t be wearing any of it. And lastly, we must never stand for the intentional misspelling of basic words to make them somehow hip or cool – “Yung Money”. It’s the dumbest thing I’ve seen people embrace.

#2 is not a “me” problem because I want to see good racing. It WAS better in the 90’s, the cars were not as aero-dependent and the suspension still mattered. As for Dale, NASCAR overall was headed the way it was regardless – timing was coincidental. Ironically, I believe it was Childress, DEI, and Petree who ushered in the importance of Aero when they chose to partner on development to gain an edge on Superspeedways.

I still cling to the hope they will again put a good product on track that doesn’t rely on gimmicks and rock concerts to sell tickets/ increase viewership. I’m willing to give the new car a shot on track, but don’t have much faith the TV coverage will improve.

They ruined the pit stop when they went to air guns and took away the 4-way lug wrench.

Don’t get me started on the hydraulic jack and windshield tear-aways! lol

One other thing im sick of is “ lets turn it up”. A stupid waist of air time that serves no purpose.

I guess you put your belt around your waste? Actually, that could work.

This is arguably one of the most important years in NASCAR’s history.

Really, the only thing that NASCAR wants to do is get more WOKE. If they do, then their fan base will dwindle away to nothing. The millennials and the rest of the “participation ribbon” generations don’t care about cars and racing. They have no clue and don’t want one. They can’t go for 5 minutes without using their phone and their attention span is even shorter. The more WOKE this year, the less fans…. So tired of being told how I should look, feel or be sorry for my whiteness. …

Agreed how important this year is as well. If these cars are a mess in the big draft or those axel problems that were seen in LA are widespread.. it’s going to be ugly. Have to enjoy what is left – because the sport we loved is a dead man walking. As you said – these kids don’t care about cars, manufacturers aren’t actually going to build them anymore – and none of us will watch a Europe style golf cart series with piped in “engine” sounds. NASCAR has to at least pretend to be “woke”, because all the corporations have to at least pretend to be “woke” or face cancellation by the media overlords. The few of us left that care are largely comprised of the “anti-woke” – thus we go away too… Not a rosy future for a NA V8 based stock-car series.

I have little to no hope that the new cars are going to produce grate racing and I think we might see a lot of parts braking for the first half of the season. Those 500 mile races might be interesting as top teared drivers try to get there cars to make it to the end.

I sea what you did their! lol

Now let’s play with there, their and they’re and your and you’re and affect and effect.

TigerAnn
Reply to  Bill B

#10 Will fox tell us why in the world they think we want to see bubba’s in car camera for three laps, especially at Daytona.

Because he’s one of the “stars” of NASCAR. Just like princess SP was.

And please stop telling me how strongly competitive MJ is. I’ve seen how his NBA team is year after year.

MJ’s competitiveness only helps in his basketball career. It can’t win his businesses any championships.

Good lord, ya’ll are nothing but a bunch of whiny britches (drop the r). Go grab some Midol for those cramps

I was just about to say quit your whining. If you don’t like it quit watching.

Bill B
Reply to  Eduardo

Sorry. Not everyone will smile and ask for more when they are fed crap.

I guess you believe NA$CAR when they feed you a cow patty on a bun and tell you its hamburger. And doesn’t that pig with lipstick look purty?

Micheal Waltrip must never make an on camera or microphone appearance again! Ever! Amen!

Nascar must keep the TV rights in the capable hands of Fox. I’m tired of missing the last 10 laps watching the battle for 23rd. And also tired of hunting for the race on tv.