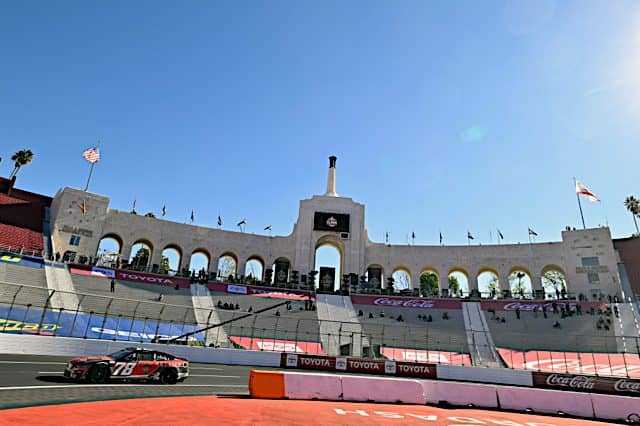 LOS ANGELES – Inside the storied walls of the Los Angeles Memorial Coliseum sits a quarter-mile racetrack, built solely for a one-off exhibition race for the NASCAR Cup Series in downtown L.A.

The idea would have felt absurd any time before 2020, before any mention of COVID-19 threatened to halt the world, let alone the sport. But NASCAR today is not the NASCAR of the last five decades – or even the last five years.

The majority of the credit lies with people like the sport’s Senior Vice President of Strategy and Innovation Ben Kennedy and Patrick Rogers, NASCAR vice president of marketing, for being willing to think outside the box and turn a previously unthinkable decision into a reality that comes to fruition Sunday night (Feb. 6).

But perhaps that vision doesn’t take shape nearly as quickly without the technology provided by the developers at iRacing.

As ideas flourished between NASCAR and the Coliseum, Kennedy and his team understood the resources iRacing could offer. Soon after, iRacing’s Executive Vice President Steve Myers and its Senior VP and Executive Producer Greg Hill were brought into the fold to start working on feasible layouts and models that could eventually help lead the NASCAR Cup Series into the confines of a major stadium for the first time since it competed at Bowman Gray back in 1971.

“iRacing has been tremendous in helping us create this track and really put it together,” Kennedy said Friday while standing atop the fresh asphalt off turn 4. “I have to give Steve Myers and Greg Hill and the entire team over there a ton of credit. We sent them a CAD file of what this track would look like in the fall of last year. They put it on their service, they built a couple of different variations of it. We played with banking a little bit, played with track with a little bit, played with different rumble strips in the corners, and [we] got a ton of great data and feedback from our Cup drivers and the professional eSports drivers that jumped on there.”

Because of the realism iRacing’s software provides, NASCAR was able to see visual details from their home bases in North Carolina and Florida instead of trekking across the country themselves.

“Not only from a racing product perspective, but just as simple as putting a virtual camera in one of the seats and being able to see what the sightlines are for the fans, too,” Kennedy said. “So they have been tremendous partners for us and we look forward to continuing to work with them on some of these projects.”

Dale Earnhardt Jr., the most recent inductee to the NASCAR Hall of Fame and iRacing’s executive director, strolled the track Friday afternoon after debriefing with drivers before the weekend officially kicked off.

.@RyanPreece_, @CBellRacing and @DaleJr taking in the sights around #NASCAR’s newest venue. pic.twitter.com/rXSvLv65FA

One question lingered during the walk down the short back straightway inside the mammoth arena: Would NASCAR be as willing to take these bold risks so quickly without the advantage of iRacing’s resources?

“Probably not,” said Earnhardt Jr., who also serves as an analyst for NBC Sports. “I think that iRacing being able to build this track and then let their really, really good, talented iRacers vet the track and give their feedback is an incredible scenario. It’s very lucky for NASCAR, especially with the position that NASCAR is in with this sort of new ambitious thought process of street courses.”

While the Clash is the rightful star in the spotlight this weekend, there’s another project in southern California that has roots in iRacing.

Auto Club Speedway, located roughly 50 miles east of the Coliseum, announced plans in 2020 to convert its wide, 2-mile, D-shaped oval into a half-mile short track. Track president Dave Allen provided an update Saturday in Los Angeles noting those plans are currently on hold as approvals linger, but the basis of the proposed track layout was completely handled via iRacing.

Allen says the plan to develop Auto Club into a short track currently does not have a set timeline, but anticipates having a proper update soon. #NASCAR https://t.co/ErPyg8xj13

“For us as we designed things, it’s incredible,” Allen said. “I mean the iRacing stuff to me […] what they can do and simulate is amazing to me, even the abrasiveness of the track. […] For us as a design and knowing, ballpark, what we’ve got is invaluable.”

What we now know without question is that it is possible to take an idea, insert the specifications into iRacing and produce an actual racetrack as a result. The virtual proof now sits inside the storied concrete walls of the LA Coliseum.

“I think iRacing opens up the possibilities, right?” Earnhardt Jr. said. “They [NASCAR officials] go into the projects with so much more confidence being able to build a virtual rendition of the track and being able to actually have competitors compete on that virtual track. You can make a render. You have an artist create a render or draw something, but you can’t race that render. You can’t put competitors on that render and let them go after it and see what they think.

“With the iRacing software and that component, it really opens up the possibilities of what NASCAR can do and how creative they can get.”

Heats for the Busch Light Clash at the Coliseum begin at 3 p.m. ET on FOX, with the main event scheduled for 6 p.m. ET.

This format just didn’t cut it for me. A NASCAR Modified & Cup car fan since 1962, I gave it a fair shot but the 1/4 mile sprint was a failure. Worth a venture, I suppose… but in the end, a failure.

Apparently anything less than a 1/2 mile track is counterproductive at best.

But I’m here to beg Fox to HIRE A NEW CAMERA DIRECTOR!!!
PREFERABLY ONE WITH AUTO RACING EXPERIENCE.

That video coverage of the Clash was utterly embarrassing, and annoying, to those wishing to actually see the moves on the track.
I’ve seen better coverage by high school sports camera crews!

I hope NASCAR has a long and fruitful meeting with Fox prior to the real racing track coverage in Daytona.