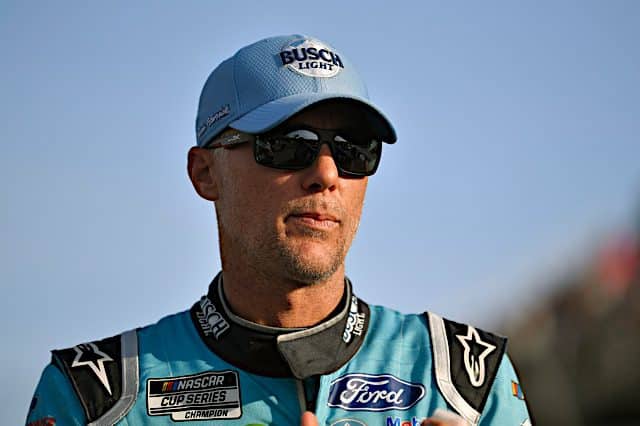 What a difference a year makes.

Kevin Harvick‘s 2020 NASCAR Cup Series season was one for the ages. Nine victories and arguably his best statistical season in his 20-plus-year career.

Fast forward one year and he failed to visit victory lane once. Heck, he didn’t even earn a single playoff point on track over the course of the 36-race season.

As Harvick told NASCAR.com during Champion’s Week in Nashville, those funky statistics may be an indictment on the playoff format more than the difference in performance from the No. 4 team.

“Obviously we’d love to have won, but we did a great job in managing the season,” he said. “I don’t know what it says with how we currently exist with our current system. We won nine times last year and finished fifth, and we won nothing this year and finished fifth. I don’t really know how to take that, personally.”

Harvick became the second ever driver in this playoff format (since 2014) to start 15th or 16th, accumulate zero playoff points over the entire season and finish top five in the standings. The other driver was Ryan Newman in 2014, who ironically finished second to Harvick that year.

It further exemplifies not only the depth of the Cup field, but the need for annual organizational growth being paramount. Harvick has been the bell cow for Stewart-Haas Racing since his arrival eight years ago, winning at least two races every season, which makes a winless season for him show that there must have really been something off.

No disrespect to Aric Almirola and his victory at New Hampshire Motor Speedway (where Harvick led the most laps, 66), but a one-win season with the lone checkered flag coming from the No. 10 car is … not great. Chase Briscoe won Sunoco Rookie of the Year and Cole Custer had a middling season, but half of SHR’s fleet in the postseason isn’t the measuring stick for Tony Stewart and Gene Haas.

With the Next Gen car bringing a significant unknown variable to the equation for 2022, it remains to be seen how SHR and Harvick will stack up with the competition. But with two more years on Harvick’s contract (and every intention of finishing it out, as he said on the Dale Jr. Download), Harvick shouldn’t be having any more winless seasons.

Kevin Harvick SLAMMED his helmet against his roof.

He advanced to the next round of the #NASCARPlayoffs, but he wanted to add his name to the win column in a bad way. pic.twitter.com/F54bVUzZt9

It may be the twilight of Harvick’s NASCAR career, but only a fool would think he’s incapable of winning another championship in his final years. He may not be the number one driver you think of when it comes to title contention (welcome back, Kyle Larson), but you best not let him slip your mind.

However many years Harvick has left, he’ll do so winning. Because 2021 was an oddity in an career spanning 50-plus victories and a championship.

“may be an incitement on the playoff format…” INDICTMENT not INCITEMENT

Could have been a spelling mistake hitting a wrong key, or even a miss spelled word by the writer, may not have been Harvick.

Well, it is well documented in various articles that there was a parts freeze, so teams in 2021 were not able to experiment with different fabrication of these parts because they could get no spares. Also the fact that NASCAR changed a template/rule on the rear quarterpanels which took away much of the finesse that SHR had into garnering more downforce. If you really look at it, FORD was a bit off most of the season Logano, Blaney and Kes won races and McDowell was in the right place at the right time. I would hope that Harvick continues racing for more than just 2 years, as he still can wheel it. If he did end up retiring after 2 years, I do hope he adds another championship. But my hope is that he reopens KHI and builds it eventually, into, a CUP caliber team. I know he has sponsors that would come along with him, like Jimmy John’s, Mobil 1 and ya know, maybe reconnect with people like Reese’s or Rheem. But personally, I just hope he keeps driving because he isn’t a cookie-cutter driver like many of today’s “young guns.” He follows the old school of driving, not to mention, can EVEN. SET-UP. HIS. OWN. CARS. and build one if needed.

Harvick was the instrument of his own demise in the playoffs. Proving that karma is still alive & well.