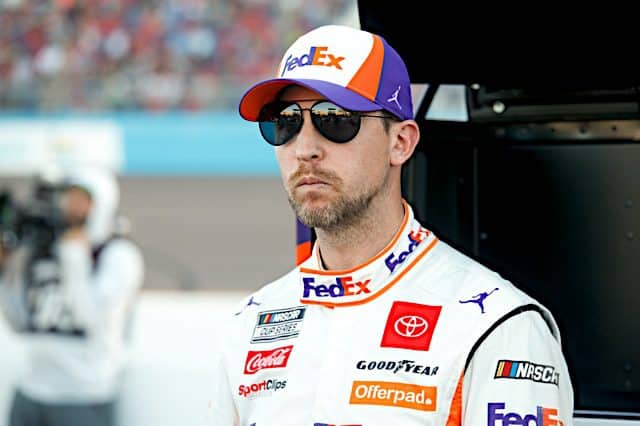 PHOENIX – For a few moments on Sunday (Nov. 7) at Phoenix Raceway, it looked like Denny Hamlin was finally going to do it.

In his 17th full-time season, Hamlin found himself with the quickest car at multiple points in the event. And despite not leading a single lap (the only Championship 4 driver to not pace the field), the No. 11’s long-run speed and lap times were the best in the field.

But inopportune cautions halted that progress and turned Hamlin’s race on its head, as he ultimately fell two spots short of his first career championship.

“There’s just nothing else I could have done. There’s nothing else,” Hamlin said matter of factly. “I drove as hard as I could every lap. I didn’t have the speed for the first 20 (laps). It was evident in a lot of the restarts we had. It was actually overachieved in quite a few. But that was it.”

So how does he get over it? His fourth Championship 4 appearance, third in a row and every time he’s come up short.

“I have to live with the result because I can’t change it,” he said. “Disappointed, absolutely, for sure. But I knew kind of going into today I was going to need the race to go a certain way. If it goes the way it did last year, it goes green out, we’re probably winning.

“But it didn’t. We knew that our percentage was low, and that was the case. Many of these races come down to green-white checkers or shootouts at the end, and that just wasn’t our strength and hasn’t been ever.”

Hamlin got off pit road second behind eventual winner and champion Kyle Larson. Having the chance to restart on the front row, he wasn’t able to get a good enough launch and ultimately fell back. He never challenged for the lead from then on.

The sprint to the @NASCAR Cup Series championship is NOW on @NBC and @PeacockTV: https://t.co/7NW8hhZFP9 pic.twitter.com/EQqtSzCzNK

“You kind of know like when someone gets a restart and controls the race late, it’s so hard,” he said. “You’re going to need them to really make a huge mistake […] my crew chief kept telling me how bad the 5 car was handling. You could see he was just plowing, but the clean air made up for any deficiencies in that setup.”

But even before then, Hamlin figured it was going to be a matter of clean air vs dirty air and cautions coming at the right/wrong time that sealed his fate.

“With every lap we just kept reeling the No. 19 and No. 5 in,” he said. “I had to get back around the No. 9. Once we did that, we just started making hay towards the front. Track position just means so much. It doesn’t matter, big spoiler, small spoiler. These cars just put off such a big wake. We don’t have the horsepower we used to be. 750 is probably down 150 from where we used to be. So track position, no matter what racetrack, is just a big, big deal.”

With the NextGen car set to debut in 2022 and an entire new era of stock car racing set to take shape, Hamlin reflected on the Gen 6 car with unknowns on the horizon.

“This is the last generation of this car that I took a very good liking to over the last three years,” he said. “We don’t know what the Next-Gen car brings. We don’t know will our team be as good. Like there’s just many, many question marks that happen after this.

“That’s why we really put so much emphasis on let’s try to win this, win this year.”

Heart-breaking development! And so unexpected.

That photo of Denny on the article was so perfect.

Not being in the lead Denny couldn’t play his throttle patting game on the restart. LOL!!

I guess there wasn’t enough chaos for Denny to thrive in this race?

Or too much for him to handle!