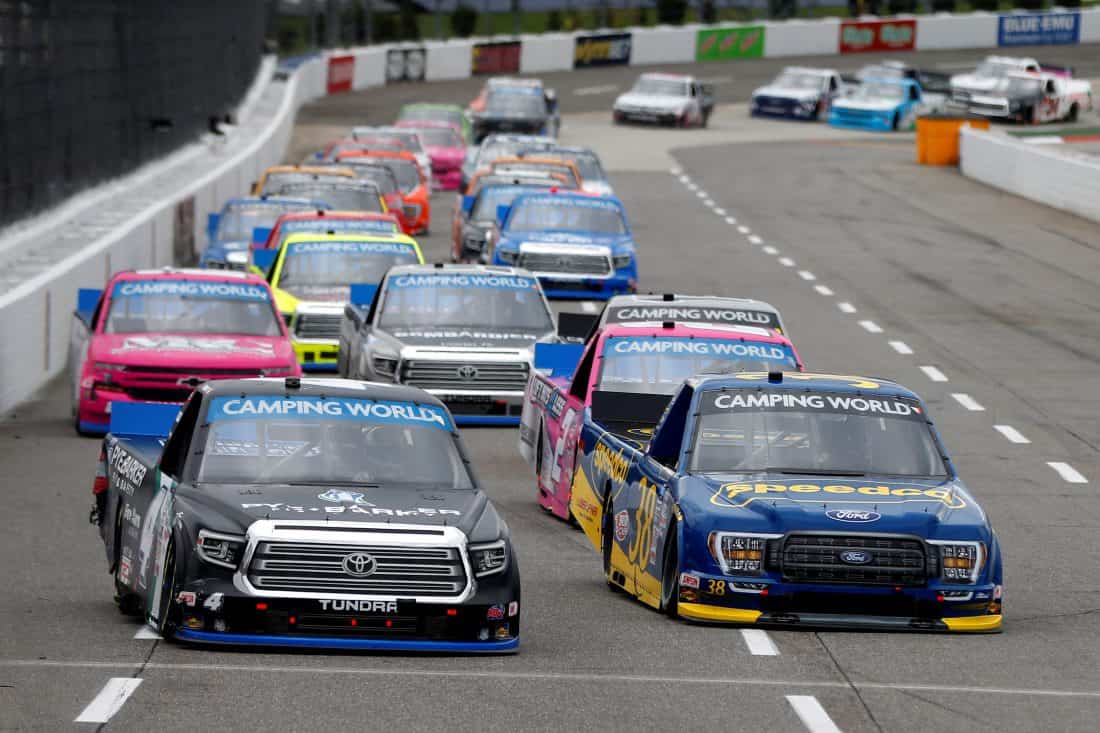 The Truck race on Saturday (Oct. 30) was a you-know-what show. Why has the respect gone down considerably in recent years? – Dan I., Knoxville, Iowa

The Camping World Truck Series has been trending this way for a couple years and especially in recent weeks. But it seems to have come to a boiling point this past weekend at Martinsville Speedway.

“At the end of the day, that wasn’t racing,” an agitated Matt Crafton said about the finish and action that came with it. “What the No. 21 (Zane Smith) did [to] the No. 38 (Todd Gilliland) right there, he never tried to pass me one time. All he did is drove through me.”

Sheldon Creed, who was displeased with Crafton post-race, tried to describe the ending of the race that ended with him missing out on the Championship 4.

“Just no respect. Chaos,” Creed said. “It’s unbelievable watching some of these guys. The No. 22 (Austin Wayne Self) wreck the No. 4 (John Hunter Nemechek), he dumped him out of the way. You guys aren’t even in the same playing field. Why are we wrecking playoff drivers? I don’t get it, so I guess that’s what you get in the Truck Series.”

Creed was also glad he’s moving up to the NASCAR Xfinity Series, where more on-throttle time is valued and respect is seemingly way higher.

“I had a really fun three years here, I’ve learned a ton, made lifelong friends, so what do you do?” Creed said. “Now we’ll move on.”

The lack of respect across the board is being pointed at younger drivers, and rightfully so. But it’s not all on them. As Parker Kligerman pointed out, he had enough with veteran Johnny Sauter on Saturday and took matters into his own hands.

“I have a ton of respect for Johnny Sauter. I love racing him, I’ve raced him for 10 years now, we’ve always laughed about racing each other — race each other hard but respectfully,” Kligerman said. “And he just flat out dumped me going into [turn] 3, and I just lost it. I don’t want to do what I had to do to him down in (turn) 1, but at some point, I have to stand up.

“There’s the kids spinning out veterans. … It’s just ridiculous. The lack of empathy or any sort of race etiquette whatsoever at these places. I just thought if you’re going to fight fire, sometimes you have to fight with fire.”

I spoke to @pkligerman about his feud today with @JohnnySauter and his rebound to a fourth-place finish. #NASCAR pic.twitter.com/jM7BhhUSci

How was the end of the race for Stewart Friesen, one driver at the center of the controversial finish?

“Typical,” Friesen said flippantly. “I mean, it just is what it is. You get leaned on and try to lean back. You never know which way you’re gonna go, right? I think it’s getting worse and worse. Every short track we do is just bump and grind.”

So how does the issue get rectified? Friesen thinks a message needs to come from the sanctioning body.

“It’s a lack of reprimand from the top down,” Friesen said. “I just spoke to the series director about that months ago. You dump a guy on the last lap, you win the race, they don’t put you back for that.

“That’s how you do it here. It sucks. It’s not fun. You don’t want to race like that. You want to have the fastest truck and win the race, which, by the way, the No. 38 (Gilliland) did. But you get bumping and grinding and shit happens.”

While Friesen also pointed to the shorter races making for increased intensity, Ben Rhodes, who qualified for the Championship 4, pointed to the officiating and the slower pace of races as the main factor.

“What do you do when you keep reracking the field over and over for cautions? It snowballs,” Rhodes said. “And everybody knows that once you go on these restarts, you got to get it while you can. And we turned into bumper cars. I hope the fans enjoyed it.”

Another topic of conversation has been non-playoff drivers racing playoff drivers hard. Rhodes said it shouldn’t matter, though, citing every team’s own agenda and no special treatment needed for those with more on the line.

“He’s still racing for his season too, you know,” Rhodes said about Self’s move on Nemechek. “A lot of people in the playoffs think they’re entitled to being raced clean. And they think they’re entitled because they’ve got something special going for them. But to me, it just makes you a target. It doesn’t make you entitled. And I’ve never been one that appreciates that kind of entitlement.

“A lot of veterans think that way. And I’ve always hated that. Nobody’s gonna bow down and move over for you. I tried to and I have to be smart, but I’m not a big fan of entitled attitudes.”

So, long story short, the lack of respect in the Truck Series isn’t going to be fixed anytime soon. It varies from track to track, sure, but the mindsets have been instilled in drivers trying to move up as quickly as possible to go go go, take take take and don’t worry about the consequences.

That’s a helluva slippery slope. Is there a line when a professional racing series turns into a clown show? It may not be there yet, but it’s trending in the wrong direction.

Why is Denny Hamlin worrying about Alex Bowman? He has a championship to focus on. – Edward R., Morgantown, W.V.

Denny Hamlin ain’t worried about Alex Bowman. He was in the moment, sure. But do you really think Hamlin, somebody who’s been in the Championship 4 multiple times and is hungrier than ever to finally get the monkey off his back, is worried about someone he himself called “a hack” and not focused on Phoenix Raceway?

I guarantee as soon as Hamlin got home from Martinsville, it was in the rearview mirror. Okay, maybe after sending some tweets defending himself.

I got here through the hardest path possible. No last name, no money, no backer. I’m blessed beyond words. I’ve spent 16 years trying to accomplish this sports highest honor. This week brings a new opportunity to achieve it. I’m ready. My team is ready. F*k!n bring it..

It never feels good to be booed. Human nature tells us we like to be liked. I’m sure that bothered Hamlin, despite him saying otherwise.

Does it bother him to get booed?

But again, Hamlin is not concerned with Bowman. He’s concerned with Kyle Larson, Chase Elliott, Martin Truex Jr. and Phoenix Raceway. He’s got a title on the mind, not Alex Bowman.

When you only need a top 10 in an ARCA race to get a full-time ride, it’s no wonder the series is what it is. Having a big bank account doesn’t hurt either.

I’m not sure I can agree with you about Hamlin, & exactly where his focus will be. I felt the same way about Harvick, & you see how that turned out.

Same thing happened on our local dirt scene,my friend is an older ex sportsman driver ,got into a mid life crisis and stated racing slingshots(scaled down dirt modified) . The class consists of young rich kids racing with no background or etiquette and take people out with kamikaze moves! Ends up being expensive to fix things every other week! Going to vintage class next year racing other experienced older racers with racing manners!