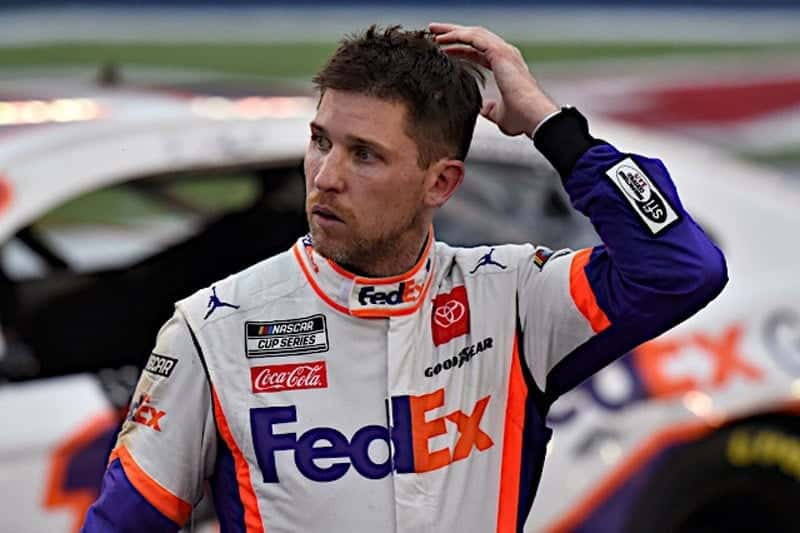 The Joe Gibbs Racing veteran saw his hopes for a Halloween victory evaporate on lap 494.  He and Bowman had been fighting hard for the lead in the Xfinity 500 for about 20 laps.  Bowman had actually taken the top spot for one lap after the restart, only for Hamlin to snatch the lead right back a lap later.  The No. 48 chased the No. 11, lap after lap, trying to work his way to the inside.  It was a fantastic battle until Hamlin’s spin, an incident which brought out the final caution of the race.  Bowman then survived an overtime restart to claim his fourth victory of the 2021 season.

Hamlin immediately expressed his displeasure, bumping into the No. 48 on the frontstretch while Bowman was celebrating.  Once he had returned to pit road, Hamlin didn’t hold back in his post-race interview.

“[Bowman’s] just a hack, just an absolute hack,” Hamlin said.  “He gets his ass kicked by his teammates every week, and is fucking terrible, just terrible.  He sees one opportunity and he takes it…

“He’s got the fastest car every week and he runs 10th.  He didn’t want to race us there.”

A relieved and subdued Bowman provided his own take after doing his post-race burnout on the frontstretch.

“I just got loose,” Bowman said.  “I got in too deep, knocked him out of the way, and literally let him have the lead back [earlier in the race].  So, for anybody that wants to think I was trying to crash him, it obviously wasn’t the case considering I literally gave up the lead at Martinsville to give it back to him.  He’s been on the other side of that, he’s crashed guys here for wins.

“I hate doing it, obviously, I don’t want to crash somebody. I just got in, got loose underneath him and spun him out.”

To Hamlin and his fans, that will sound like a hollow excuse from a driver who ruined the No. 11’s race.  But even if Martinsville ended in defeat for Hamlin, he accomplished his most important goal of advancing to the championship round of the playoffs.  While the incident with the No. 48 dropped Hamlin to a 24th-place finish and erased a lot of his points buffer, it was still enough to avoid elimination.  In fact, Bowman winning the race actually worked out better for Hamlin than if Kyle Busch or Brad Keselowski, two drivers who were still competing with him for playoff spots, had earned the victory instead.

A Cup Series championship is still within Hamlin’s reach, and that is why he must move on from Martinsville.  Hamlin has never won a premier series title before, but he knows what it feels like to come close.

In 2010, Hamlin held a slim points lead going into the final race, in position until damage from an early spin ruined his day. Late season mechanical failures doomed a possible title run in 2012.  Two years later, Hamlin made the first championship race of the elimination-style playoffs, only to have bad pit strategy prevent him from fighting for the win.

In 2017, Hamlin also had a shot to get to the championship race until tangling with Chase Elliott at Martinsville, of all places. Some well-timed payback from NASCAR’s Most Popular Driver two weeks later, at Phoenix Raceway, kept him from advancing.

Since the beginning of 2019, Hamlin has enjoyed a rebirth of sorts.  This season and the previous two have arguably been his three best years ever.  But the ending has always been the same old story.  Hamlin made it back to the championship race in 2019 and started off with a fast car. Then, during a late pit stop, his crew inexplicably put a huge piece of tape on the nose of his car, causing the No. 11 to overheat.  Hamlin had to make an extra stop to get the tape removed, taking him out of contention.

Last year, the title race moved to Phoenix, a track where Hamlin had won at the previous year.  With fellow championship favorite Kevin Harvick shockingly eliminated in the Round of 8, it seemed like Hamlin’s title to lose.  But the No. 11 just wasn’t as fast as it needed to be that day, his seven 2020 victories meaning little as he finished last among the four contenders.

Heading into the championship race now, Hamlin has looked like as strong a title contender as ever.  He and Kyle Larson have been the clear favorites all season.  A top five next week would match Hamlin’s career high for a single season and surpass his career-best top-10 total.  He still has a great shot at his first championship – unless he gets distracted.

Ever since 2010, the knock on Hamlin was that he was a poor closer who let setbacks destroy his confidence too easily.  Indeed, it often seemed like the adversity Hamlin would encounter in the playoffs impacted his mental state, forcing him into worse mistakes until the battle was finally lost.  Considering how he has become a more frequent participant in the championship race, it has felt for a while like Hamlin’s worst days of succumbing to the pressures of racing were finally behind him.

However, the last few weeks have been concerning.  The trouble started at Texas Motor Speedway when Hamlin apparently forced Chase Briscoe into the wall off turn 4.  Hamlin’s comments on the radio indicated he was upset with Briscoe and had not forgotten their run-in at the Indianapolis Motor Speedway road course earlier this year.

Yet Hamlin nearly ruined his own Texas race on a late restart while fighting for room at the exit of turn 4, just as Briscoe was doing.  Contact with Ryan Blaney created a tire rub on the No. 11, causing Hamlin to spin a few laps later.  Rather than shake the whole thing off, Hamlin exchanged words with Briscoe on Instagram several days later, reigniting their conflict.

Martinsville turned even uglier for him.  Running into Bowman after the race and taking personal shots was a bad look for this 40-year-old veteran.  Yes, Bowman made a mistake that cost Hamlin a win, and Bowman needs to bear responsibility for the spin even if it was an accident.  It also wouldn’t be out of line if there was some payback delivered to Bowman in the future.

But Hamlin cannot afford to stew over this incident right now.  This year is his chance to finally win the championship, a golden opportunity to capture a title that has slipped out of his grasp so many times.  Seasons like 2021 don’t come around often and, with Hamlin now in his 40s, who knows how many more chances he’ll have.

Hamlin can be angry with Bowman on Sunday.  But by Monday morning, he will have to let it go.  He cannot let frustration derail his efforts this late in the game.  Hamlin may not have another grandfather clock, but he does have a ticket to the final round of the playoffs.  Phoenix is his chance to prove that he can rise above adversity and win a Cup Series championship.

In one week, we will find out if he is up to the challenge.

I wonder if Denny used the same words to describe what HE did to Chase Elliott on a short track not long ago? Of course, he actually wrecked chase, not just spin him out. Certainly a low point for Denny. Not the behavior One expects from a potential champion. Wonder if he noticed that the crowd at his ‘home track’ soundly booed him at intros, and cheered when Bowman took the lead?

Yeah, Denny took out Chase 4 years ago. He owned up to it but has been hated ever since. Chase paid him back by taking him out of the playoffs. Hamlin surprisingly didn’t give Chase any flak over that. I guess he knew he deserved it. Since then he’s been taken out and taken other people out. He’s not usually as upset as he was this time, I guess because the stakes were higher. I think he’ll go down as history as “the guy that took Chase Elliot out”.

KARMA! How many times has Denise driven inside of someone and gotten loose and taken them out?

Again lol Rick should have Bowman really talk it up this weekend about Denny trying to push him backwards after the race. Get in Denny’s head all week long.

As far as the incident with Chase Briscoe goes. Hamlin seems to have conveniently forgotten that it started when he forced Chase off track.
He’s going to have an even harder time moving on, after NASCAR fines him for his post race interference with the victory celebration, as well as his language during his interview.
I know 3 other drivers who hope his mad carry’s over to Phoenix.

I’m starting to think age has something to do with this type of behavior. Harvick acted like a child a few weeks back. These older guys can’t let it go, It’s almost as though they believe they should be respected because of their tenure. This new breed of young racers just do not feel that way nor should they. Kind of like the racers that have been there for a long time believes the young uns should move over and not race them hard, doesn’t work in this day and age. Ive seen it in golf for the last ten years. Paying dues is a thing of the past. These kids are hungry. By the way, I am 69.

Denny complaining about the taste of his own medicine. OK. Got it.

If Denny and Kyle were calm and simply apologized for being in Bowman and Keselowski’s way, these sports writers would be out of business! What would there be to talk, err, write about? lol

I think Denny and Kyle need to get out of the car, go face to face with Alex and Brad like men, and start throwing punches! It would be a ratings bonanza! Think I’m uncivilized, off my rocker? Why do you think Daytona, Talladega, and the Jerry Springer Show (I guess Steve Wilkos now) get the best ratings? It’s because deep down people are horrible and want to see fights, mayhem, and destruction! They say they want a fair playing field with honorable gentlemen playing the game who are humble and gracious in both victory and defeat, but ratings tell the truth!

“To Hamlin and his fans, that will sound like a hollow excuse from a driver who ruined the No. 11’s race.”

Only to Denny since he has no fans.

It was laughable when Denise went into his ” humble mode” after bumbling through the first part of the interview, trying to justify his whining. The boos drowning out his response was priceless! I’ve said it for years; he’s a prima Dona, snarky punk. Perhaps his bad decisions in his personal life is biting him in his pansy a$$.

He can dish it out but he cannot take it. He needs to realize that other drivers are going to race him the way he races them. If he doesn’t like it, he could always retire.