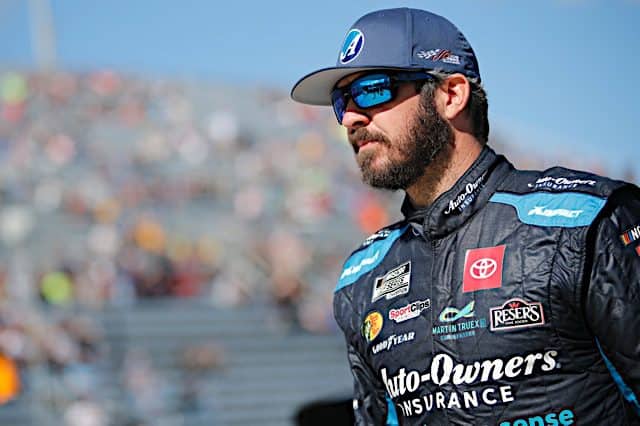 Martin Truex Jr. had several scares on Halloween but overcame them to grab the final spot in the Championship 4 by just three points.

Truex started fourth and finished fourth in the Xfinity 500 at Martinsville Speedway on Sunday afternoon (Oct. 31), but the results fail to tell the tale of his up-and-down day.

“I have no idea how we finished fourth,” Truex said. “I’m gonna buy a lottery ticket on the way home.”

Truex ran up front for most of the early portions of the race. He looked to be the fastest car not out of the Hendrick Motorsports stable at times, and finished the first two stages in the top four.

But then the No. 19 Toyota started overheating.

Chase Elliott is past Joey Logano and back into the race lead with 150 to go.

Meanwhile Martin Truex Jr.'s car appears to be overheating in the pack. That could obviously be huge playoff-wise. Something to monitor.

The car cooled back down, and there were no more reports of overheating problems for Truex. But it was the first chink in his armor.

With a little over 120 laps to go, Truex informed the team that he had a loose wheel. Almost immediately after he said it on the radio, the caution came out on lap 379 for Daniel Suarez‘ spin. So Truex was able to pit under yellow and not lose any laps. And the crew later confirmed the wheel was indeed loose, so Truex catching it prevented him from making his day worse.

Truex was working his way back up when he dove underneath Brad Keselowski and got loose, losing several spots. Truex was then on the outside of the No. 10 when Aric Almirola missed the corner and forced Truex up into the outside wall.

When he was asked by The Athletic‘s Jeff Gluck about slamming into the wall, Truex corrected him.

“I got slammed into the wall,” Truex emphasized.

Truex had major damage from the incident, including a tire rub, but he soldiered on. He even told the crew he wasn’t pitting, as the loss of track position was likely going to lead to his elimination.

“They told me don’t swerve the tires under caution and we think you’re gonna be alright,” Truex said. “So that’s what I did, and it worked.”

The tire rub went away, and Truex continued his push for the playoffs.

He was racing against Kyle Busch and Keselowski for the final Championship 4 spot, and their finishes of second and third, respectively, tightened up the points race. But fortunately for Truex, neither driver was able to get around Alex Bowman for the race win. So Truex bringing his No. 19 home right behind them in fourth was enough to advance him to race for the championship next week at Phoenix Raceway.

See also
Kyle Busch Narrowly Misses Out On Championship 4: 'We Ran Like Dogs**t'

“It’s a damn honor and a pleasure to get to race for championships,” Truex said. “And only four of us get to do it, so it’s a fun week.”

The tow drivers who had a realistic chance to advance on points were doing everything they could to advance but weren’t successful.
After the fender damage, Martin seemed to be doing just the opposite. Instead of taking it easy he seemed to get more aggressive, but still advanced. I think of the three, he has the best chance at Phoenix. But he has his work cut out for him.