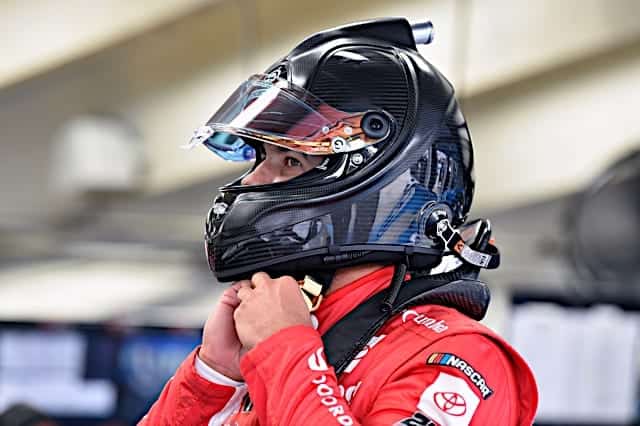 One of the focal issues of the playoffs thus far has been the atmosphere between non-playoff drivers and playoff drivers. It is what separates NASCAR from any other sport and has been existent each year of the current system. However, 2021 has seemed to play that hand more than any other year. For Bubba Wallace, Sunday’s race at Kansas Speedway (Oct. 24) was his first real opportunity at experiencing that challenge, resulting in a top 15.

One week removed from a race at Texas Motor Speedway in which he only completed 30 laps before triggering a colossal accident, the No. 23 DoorDash Toyota likely had its best run on a 1.5-mile track at Kansas. Wallace quietly flew under the radar for the first half of the race while Wallace slowly moved up into the top 15 in the first stage, setting the stage for a strong afternoon.

It was stage two where the No. 23 began to make waves. Wallace cracked the top 10 for the first time, passing none other than two-time Cup champion Kyle Busch. It wasn’t a brief visit, either. Wallace stayed in the top 10 for much of the remainder of the 400-mile event. The Mobile, Ala. native paced his Toyota well throughout the final stage, presenting an opportunity to reel in a top 10 result.

On one of the final restarts of the race, Wallace chose the inside lane, positioning himself in the eighth spot. A common theme at intermediate tracks with the current package is the free-for-all jockeying on restarts. Wallace was a beneficiary of this, challenging for a spot in the top five with playoff drivers before another yellow flew.

With one pit stop, all of the progress was wiped out when the No. 23 was busted for speeding exiting pit road. The setback cost Wallace a tremendous amount of track position, and the end result was a 14th-place finish. Still, it was another promising day for the team and Wallace led the Cup underdogs. But once again, the plague of finishing races bit 23XI Racing once again.

The 1.5-mile tracks are some of the most challenging tracks for a new team to gain footing on. 23XI Racing has not been immune to it but should take positive takeaways from today. Their speed was arguably the most they’ve had on intermediates in 2021. Additionally, the 14th-place result equals two other efforts for Wallace’s best finish on 1.5-mile tracks this season. They aren’t winning numbers by any means and may not even be playoff-worthy quite yet, but the process continues to build in a forward direction for 2022 and beyond.

See also
The Big 6: Questions Answered After the 2021 Hollywood Casino 400

At several times this year, the newest teams to the Cup Series have been leading the charge for the underdogs. More than once, Wallace and Daniel Suarez have finished back-to-back. That was once again the case at Kansas, with Suarez bringing home a 15th-place finish.

Handling and windy conditions hindered several drivers, and Suarez was among them, struggling to keep his car in the top 25 at several moments. But as Trackhouse Racing Team and Suarez have proven time and again during their inaugural season, the fight is never empty. Suarez’s team kept working on the car, he was able to get back on the lead lap in the late stages, and what was heading to be a frustrating afternoon ended in a respectable top 15. For any team, it is big to turn an apparent bad day and make it a solid one, let alone a new team. The result was Suarez’s fourth top 15 in the last four races.

Backing up Suarez in 16th was Michael McDowell. The long runs of the race trapped many drivers one lap down, reducing the amount of exposure they would earn in the race. But for a Front Row Motorsports program that has strived to improve its intermediate program, it was a second consecutive week of fruit for their labor. Like Suarez, the longer the race went, the No. 34 Love’s Travel Stops team was able to improve the car. In the latter stages of the race, McDowell cracked the top 20 and stayed there for the remainder of the race. The 16th-place result follows up a 17th at Texas in what was his fourth straight finish of 17th or better.

Despite these solid finishes, the feel-good story of the day among underdogs likely belongs to Parker Kligerman. He made his first Cup start since 2019 with Gaunt Brothers Racing, the same team he appeared in 14 races for in that 2019 season, in addition to four starts with GBR in 2018. Our own Davey Segal recently had Kligerman on the Frontstretch Podcast, where Kligerman expressed an interest to drive full-time in NASCAR. Conversations were likely sparked even more following an impressive run at Kansas.

Kligerman started at the rear of the field from the 40th position but quickly soldiered through traffic in the first stage. At one point, he was running top 10 lap times. Pretty impressive for a car that struggled mightily in 2020 and was making only its eighth appearance of 2021.

The No. 96 was a consistent sight inside the top 20 nearly all race long. Underfunded teams have trouble lasting the endurance of races when dialing in a strong run, but Kligerman stayed firm despite handling woes in the final stage. In the end, he finished in 20th, an impressive result for everyone involved. It was the fourth top 20 of Kligerman’s career in 29 starts for largely underfunded teams. Like many of his opportunities, the 31-year-old appeared to make the most of it, wearing NBC Sports’ helmet camera and getting to do the in-car interview in pace laps. His excitement translated to his performance, and this is one driver that should not be overlooked on the short list of free agents.

“Thanks to Gaunt Brothers Racing, Toyota and Fast Checkout for being awesome to work with today,” Kligerman said following the race. “It was definitely a day where we struggled on the short run and were really fast on the long one. It was just a matter of me learning and trying to figure stuff out in the second half of the race. We needed a Lucky Dog or something to go our way to get back on the lead lap. We could’ve easily finished in the top-15. I probably asked for one adjustment that made us go back a little bit. Overall, a successful top-20 day. I don’t think that’s a miss at all after hopping back in a Cup car after two years. It was one of the best Cup cars I’ve ever driven.”

When notable results from the NASCAR Xfinity Series are covered, I have not covered Ryan Sieg. Sieg took a big leap in 2020, qualifying for the playoffs and a career-high seven top fives. However, the driver of the family-owned, single car team has taken a step back in 2021 with a lot of unfortunate luck. The Xfinity race at Kansas (Oct. 23) quite possibly was the bright spot of his season through 31 races. For the most part, Sieg had a respectable top-15 run. However, a late caution allowed him to play tire strategy after saving a set in case of a yellow. The plan worked masterfully, allowing Sieg to charge from 15th to fifth in the last run of the race, earning him his second top five of the season.

Corey LaJoie had a throwback of his own this week. LaJoie’s No. 7 Circle B Diecast Chevrolet replicated the car featured in the racing movie Stroker Ace from 1983, which starred the late Burt Reynolds. Lajoie played the part perfectly all week, bringing the retro look to a 25th-place finish.

One last opportunity remains for playoff drivers in all three series to clinch a spot in the championship race, as all three series head to NASCAR’s shortest track at Martinsville Speedway. For underdogs, it is another opportunity to close the season out strong and even an opportunity for some to prove their free agent stock.

In the NASCAR Cup Series, keep a close eye on Wallace. As mentioned, he’s had success in the trucks before, and Martinsville appears to fit his style in a Cup car. LaJoie also could have a breakthrough performance, as he has a pair of 18th-place runs with even less funded teams.

The underdog of the NASCAR Camping World Truck Series playoffs is Carson Hocevar, who will make his second truck start at the Virginia track. Hocevar is practically in must-win territory, sitting in seventh, 37 points below the cutline.

The finish doesn't tell the whole story, but we've got some momentum headed into the last two races of the season.

Fought all day and got a solid top-15 result to show for it ?

Looking forward to racing for a grandfather clock next weekend ??️ pic.twitter.com/oXwDriJcfx

What a day for the Sieg Brothers at @kansasspeedway. @RyanSiegRacing finishes 5th in the XFINITY race and @KyleSieg39 finishes 7th in the ARCA race. Very proud of everyone on our team. Thank you to all of our sponsors, fans, and family for the continued support of RSS Racing. pic.twitter.com/QaELvzE502

Bubba is averaging 20 POINTS per event and is behind the 21, 17, and 42 and their equipment is nowhere close to Bubba’s.

Yes, how does a guy with all of this natural talent ( according to the scribes) with one of the best $$$ backed teams, all star crew chief, endless resources, mega support at all angles; how does he quality as an “underdog”? Isn’t that disrespectful to him? How does he feel about being labeled like this? I’m really just curious, I don’t have a dog in this fight, and how long will he be considered an underdog? I hope he does well moving forward, I’m just a little confused I suppose.

They are a new team, with new people, and no notebook whatsoever. There is no practice or qualifying to speak of.

All the money and top of the line equipment in the world ain’t gunna help if the car isn’t set up well and you have no idea about that till the green flag flies.

They are with Gibbs racing. They are in on all the team meetings. They have access to all the information they need but it ultimately comes down to the questionable talent of the driver they chose because of his colour who is being hyped just like Danica. And we know how that turned out. Danica got one win in Indycar with fuel mileage and Bubba has his win because of rain.

Rain and Nascar throwing the flag at their discretion.