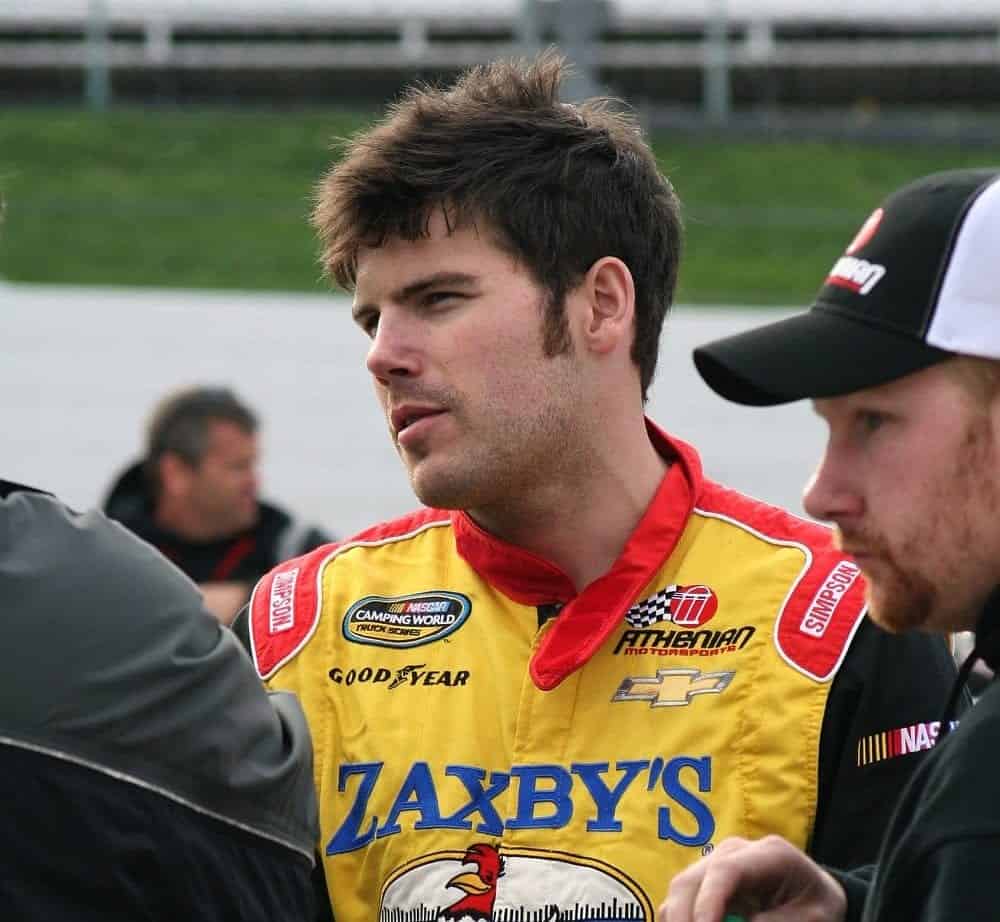 John Wes Townley, who made nearly 200 starts across NASCAR’s Camping World Truck Series and Xfinity Series over a nine-year span, was shot and killed in a double shooting in Athens, Ga. on Saturday (Oct. 2).

A report from the Athens Banner-Herald says responders to a shooting near the Athens Five Points area found Townley and a female victim had been shot. Both were transported to a hospital, where Townley passed away from his injuries. The Five Points area refers to a “retail corridor and neighborhood” close to the University of Georgia’s campus.

Additionally, the report stated that authorities were in contact with the perpetrator, who has not been charged as of yet, and that he was known to the two victims.

The son of longtime sponsor Zaxby’s co-founder Tony Townley, he made 76 Xfinity and 110 truck starts during his career. Townley scored his first victory in the latter series on Oct. 3, 2015 at Las Vegas Motor Speedway.

This article will be updated as more details emerge.

Wow. I thought people only got shot in the United States because guns are illegal everywhere else. Oh yeah, that’s right, the bad guys still find a way to get guns.

I’m in my RV right now on the Oregon coast. As I’m typing this I’m looking at the Pacific ocean. In this campground, there must be 15 campers from the Medford Oregon and Grants Pass Oregon area right now packing sidearms like it was the old Tombstone territory. Who knows what else is inside all these RVs, weapons wise. Been like that all summer long. I’m running northern Idaho tags, this is mild compared to up there.

Well,,,, it is the wild west…LOL.
You never know when a wildebeest, mount lion, dingo or the king of England will come running out of the forest.

lol…. Oh I’m mostly central Colorado and western states and just assume everyone is armed. I have a 2 year old German shepherd riding in the backseat. He’s 100% still all puppy. So we are on a mountain road and all of a sudden the whole interior of my truck fills up with a noxious mists. Instantly I can’t breathe, or see as my eyes water up. My face is burning. I slam on the brakes, lower all four windows and we jump out. In the pouch behind my wife’s seat I carry a large cannister of grizzly bear spray. Powerful kind that shoots 35′. The dog had bit into the cannister. He was bored. lol now I keep in nearer my knee and away from him. That was last spring.

I bet that left a bad taste in his mouth.

President Biden should pass a law saying bad guys should not be able to have a gun.

Damn,,, you’re a genius. Why hasn’t anyone else ever thought of that?

I rarely watch the trucks so I’m not too familiar with Townley, but my heart goes out to his family. Such a tragic loss.

Yes it is tragic and sad, shame on me for not saying that first.

I remember John Wes Townley. Early in his career he was constantly (not an exaggeration) wrecking. Later he gained respectability. Glad he won a race, not every driver gets to do that.

Not to make light of the situation but this looked odd a Jayski site. I don’t think Utter was involved!

Agree with you on this. JW was a wreck machine early on but really did improve to be a credible driver. He gets credit in my book for one of the best post-wreck fights (in particular for hilarity) ever (with Spencer Gallagher). Condolences to his family and friends… really sad situation.