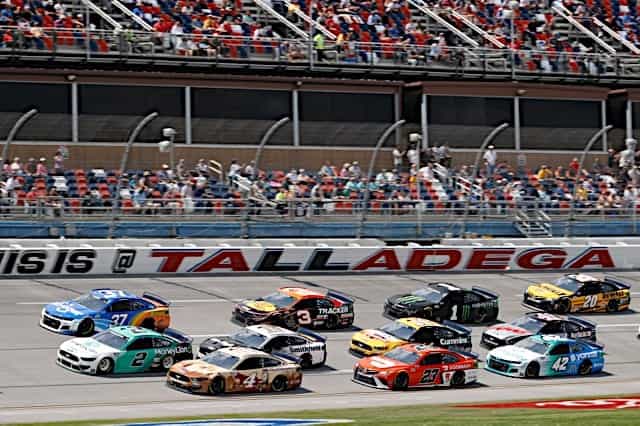 This isn’t the first go-around of the season for these drivers at the Alabama racetrack, but if you aren’t familiar with it, here’s a little about it. Talladega is the biggest paved oval in the Cup Series at 2.66 miles in length and has 33 degrees banking in the turns. It’s also wide, so three-wide pack racing is common there (especially on the restarts).

One thing that occurs often at both Talladega and Daytona International Speedway is the Big One – a crash that collects multiple cars in the midst of the pack. Sometimes there’s more than one of these, while other times only a few cars wreck at one time. However, certain drivers do tend to get through the chaos more times than not and would be best for your DraftKings lineups.

Since big accidents happen a lot at these superspeedways, some of the drivers who start further back wind up with a top 10 or 15. Rostering these drivers in your DraftKings contests is key to winning.

For example, in the spring event, three drivers who began 23rd or further were in the perfect lineup on DraftKings. The other three were the winner (Brad Keselowski) and the fourth- and fifth-place finishers (Kevin Harvick and Matt DiBenedetto). But after last year’s fall playoff race, no one in the perfect lineup started better than 16th. You don’t have to be perfect to win some money, but you can use the information from the perfect lineups to help set your own.

Before I share some of my DraftKings picks for Talladega, let’s see how last week’s drivers did at Las Vegas Motor Speedway:

William Byron began in the back but entered the top 10 fairly quickly. However, a bad pit stop and tire problems saw his strong run diminish by the end of the night. He finished 18th. Further back, Chris Buescher finished where he started in 25th, resulting in a far lower score than I had hoped.

If I had readjusted my lineup and played Denny Hamlin instead of Byron and DiBenedetto, it likely would have won.

The top score in the $2,500 Quarter Jukebox was 327.8 and had Kyle Larson, Hamlin, Tyler Reddick, Daniel Suarez, Ricky Stenhouse Jr. and Chase Briscoe.

Most people will likely place Hamlin in their lineups but I feel like he will hold back a bit since he is already locked into the next round of the playoffs. However, he could still be there at the end and sneak in a win over the other drivers.

But I chose Blaney because he won the regular-season finale at Daytona in August. Also, he won both in fall of 2019 and spring of 2020 at Talladega, leading 98 total laps between the two races. This past spring he finished ninth after being out front for 11 circuits. If he avoids trouble early, the No. 12 Team Penske pilot should contend for the victory at the end.

Haley’s salary seems a bit high but could pay off in your DraftKings contests. He’ll be driving the No. 16 Kaulig Racing car this time instead of his usual Spire Motorsports No. 77. Earlier this year, Kaz Grala drove from 38th to sixth for the team, the same place where Haley starts this week.

The Indiana native is known for his strong superspeedway finishes in the Xfinity Series but he’s also done well in the Cup Series. In last year’s playoff race at Talladega, Haley gained 24 positions to end in 11th place. Additionally, he won the summer Daytona race in 2019 after rain halted the field after stage two. Then in this year’s August event Haley finished sixth. If he can hang around for 500 miles, he should have another good result at Talladega.

Elliott has had some good runs at Talladega and could win his second there this weekend. In the 2020 YellaWood 500, he led 41 laps en route to fifth place. Then in 2019 he drove the No. 9 Hendrick Motorsports Chevrolet to a victory in the spring and an eighth in the October event.

The Dawsonville, Georgia native also did well in both Daytona races this year, finishing runner-up in the season opener and eighth in August. Elliott was out front for 36 laps in the latter event, which added bonus points to his DraftKings total. Finally, in August of 2020 he finished second to his teammate Byron. Hopefully Elliott can steer clear of the carnage and earn another good result on Sunday.

I was really intrigued by Newman’s recent history at the Alabama course. He’s earned five top 10s in the past nine races there, including a second place in the fall 2017 and 2019 events. In the April 2021 race he advanced 15 spots to end in 13th, while last fall he brought home a sixth place after starting 19th.

Similarly, the current No. 6 Roush Fenway Racing driver has earned three top fives and six top 10s in the last nine Daytona races. He finished third in August this year and nearly won the 2020 Daytona 500 but was turned and crashed shortly before the finish line. This may be his last shot to win a race before the season ends, as Keselowski is slated to hop in the No. 6 car starting next year.

There’s not as much to say about Custer, who’s seemed to experience a sophomore slump this year after winning a race as a rookie last season. Still, he has a couple of good finishes at the superspeedways so far in his Cup tenure. He wheeled the No. 42 Ford of Stewart-Haas Racing to 10th place this past spring after beginning 27th. Also, he was 11th in this year’s Daytona 500.

Custer is really only here as a lower value play that can gain several positions on the racetrack.

Speaking of value plays, I feel there’s no better driver in this range than Preece. Why? Because he’s always started worse than 24th at Talladega but finished 18th or farther in all five races. His highest finish was a third place in the spring 2019 race. Last October he was 10th after rolling off from 25th place, while in April 2021 Preece advanced 15 positions to end in 14th.

This isn’t even counting Daytona, where the No. 37 JTG Daugherty Racing driver finished sixth in February and fourth in August this year.

He’s sure to be popular on DraftKings, but if he keeps up the good runs he’ll be worth it.