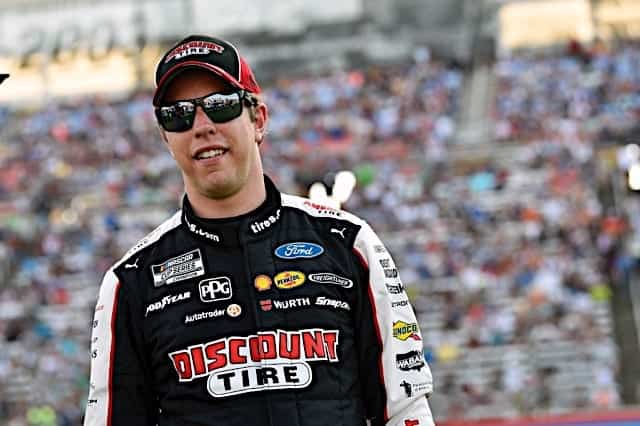 The long-awaited news of Brad Keselowski joining Roush Fenway Racing as a driver and co-owner in the NASCAR Cup Series is now official.

Keselowski will pilot the No. 6 Ford in 2022, while also having a leadership role on Roush’s competition team, the organization announced July 20.

“I’m truly excited about this partnership with Brad,” Jack Roush said in a team release. “I think it will bring a lot to the organization, from not only Brad’s ability behind the wheel, but a rejuvenation and fresh perspective across our teams. I’ve had the opportunity to watch Brad for a number of years, as he has fought and clawed his way up the ladder, molding himself into a champion and one of the top drivers in our sport. I’ve always admired his resolve and determination. I’m very pleased that he has chosen to be a part of our organization and I’m proud to partner with him moving into the future.”

“I’ve been asked to say I’m passing the baton onto him — which I am — but I’ve still got one hand on the thing,” Roush said in a press conference.

Keselowski joined Team Penske fulltime in 2010 and won the 2012 Cup championship. He has 35 career Cup victories, including 34 with Penske.

“I am thrilled to be able to share the news about this next venture with my fans, peers, and the industry,” Keselowski said in the release. “This presents an opportunity to continue my on-track success with a strong team and a long-term commitment, but also dive into my passion of team ownership where I know I can be an asset to the future of the team. I am optimistic about what Jack, John (Henry, Fenway Sports Group owner) and I can accomplish together, especially with a new era for our sport on the horizon (with the Next Gen car). Our goal is to win races and compete for championships at NASCAR’s top level, and we plan to do just that.”

Penske announced last week that Austin Cindric would wheel the No. 2 car starting next season, while Harrison Burton jumps in the No. 21 Wood Brothers Racing car.

Ryan Newman, who’s driven the No. 6 car since 2019, has 18 Cup victories throughout his career. Since joining RFR he has four top fives and 19 top 10 finishes. Newman’s 2022 plans are yet to be announced.

Roush president Steve Newmark explains the talks the team has had with Ryan Newman about future opportunities with the organization as Brad Keselowski replaces Newman in the No. 6 car next year. pic.twitter.com/X1JRMXWqOv

I’m happy for Brad. He’s one who worked and earned everything he’s gotten in Nascar. His KAM company will be a bonus for Rousch. As head of competition committee, I’m thinking Newman is gone. Ryan earned his engineering degree 22 years ago, the world has changed since then big time. RFR needed this in a big way.

Agree with you on Brad. I can still laugh when I think about the way he celebrated after his championship. With a beer in one hand and a trophy in the other. Getting a little more pie-eyed in each subsequent interview.

I thought Ryan should have taken hint from fate or the cosmos or whatever you want to call it when he had his accident last year. He’s had a long and decent career. Although he seems reluctant so it wouldn’t surprise me if he hung around a few more years (kind of like B Labonte did after JGR). Somebody will be willing to pick him up.

lololol yep, his celebration was unpretentious for sure. I can also remember Brad’s dad saying that Brian was the better driver of his two sons.. And he was serious. Brad was motivated early in life, and he just flat out wouldn’t give up.

Amazing to think at this time ten years ago, Brad was questionable to return to Penske in 2012 after mustering only a fuel mileage win and not much else to that point on his tenure there.
Of course he closed 2011 strongly after suffering a serious ankle injury at a test session and the rest is history.
Good for him.

Been a BadBrad fan since before he said that “Kyle Busch is an ass”. But that cinched it.

I like a lot of different drivers but first cheered for Brad at dega when he held his line and didn’t back down when Edwards thought he could intimidate him. lol His first Cup win. His KAM company is doing great too.

That was a great win.

Big fan of Brad, but I hope he isn’t jumping off the deep end, with the team being at the mercy of the Fenway Corp. Even if he owns 49%, he’ll be at the mercy of the accountants and the “return on investment”. Their egos aren’t fed by winning races, like Hendrick, Childers, and Gibbs. I really wonder what type of power Jack has had since he “cashed in”.