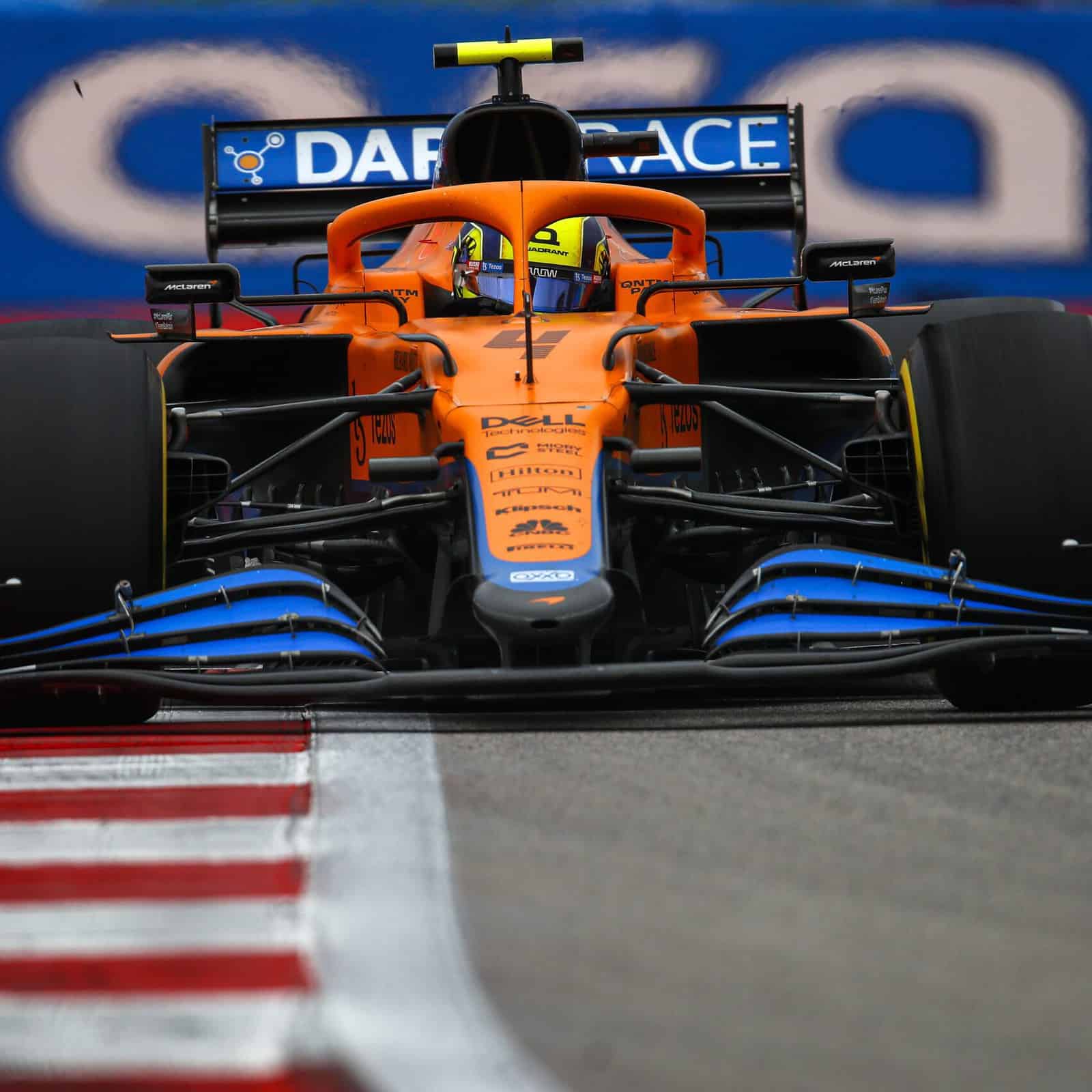 This past Sunday (Sept. 26) at the Russian Grand Prix, Lando Norris gave away what would have been his first Formula 1 win. His mistake came when he thought he could manage his slick tires to the end of the race on an increasingly wet track.

While it might be easy to chalk up his poor decision-making to hubris, and while he may have been the one behind the steering wheel, his team also did him no favors. The McLaren team should have done a better job of watching the weather radar and of imploring Norris to come in for intermediate wet tires. Instead, they played a part in the botched race win.

Scoring the first victory in F1 is obviously not easy.

Over the sport’s history, 34 different drivers have ended their careers with just one win.  As of the Russian GP, 770 drivers have competed in the sport. Of those 770, 111 have earned a victory. If the math is correct, that means that around 14% of the drivers who have competed have been able to hold the big trophy at the end of a grand prix.

One way of looking at that statistic is to further realize how good – and fortunate – drivers like Lewis Hamilton and Michael Schumacher have been, taking 100 and 91 wins, respectively.  Yet the statistics also underscore the current composition of the field of drivers.

During the 2021 season, 21 drivers have competed. The number would be an even 20, but Kimi Raikkonen missed two races while dealing with COVID-19 and Robert Kubica took his seat in the Alfa Romeo.

But of the 21 drivers, 12 of them have won at least one race, meaning that today’s field is somewhat atypical with more than half having stood on the top step of the podium. Should Norris have grabbed his maiden win in Sochi, the number would have become more confounding.

The numbers actually suggest that having such a field is a total improbability.

Consider that the late Phil Hill, an American driver who won the 1961 championship, only managed three wins for his entire career. Or that Keke Rosberg, Nico Rosberg’s father, scored only five wins, yet won the 1982 title and retired in 1987. His son, however, looks rather stout with his 23 wins and the 2016 championship.

No one, however, has won the title without a win. For careers that last between 5–7 years, notching a victory is the key to longevity. Sergio Perez started in 2011, same with Daniel Ricciardo. Valtteri Bottas began his F1 career in 2013, Max Verstappen in 2015 and Esteban Ocon in 2016 – and Ocon’s career is even more bizarre, as he did not race during the 2019 season.

Of course, there’s the veterans club that currently patrols the track, with Raikkonen and Fernando Alonso both starting in 2001, then Sebastian Vettel and Hamilton both seeing their first grids in 2007. Those four drivers alone account for 196 wins.  No wonder they are all still in the sport – they’re good.

For Norris, the gaffe plays into a confusing adage: Before you win one, you have to lose one.

Lando Norris looked to be heading for a first race win in Formula 1… but it went wrong.@andrewbensonf1 on a dramatic Russian Grand Prix and why title concerns remain for Lewis Hamilton despite his landmark 100th victory.#bbcf1

That kind of thinking seems like hogwash. Or perhaps it is a way to re-think a terrible loss. The reality is that Norris is a rising talent. For most of the 2021 season he has outdriven his teammate in Ricciardo, showing himself to be a star in the making.

He has accumulated four podium finishes and is ahead of Ricciardo in the points, 139 – 95. He is just 21 years old and all indicators trend that he will be an important figure for McLaren for the future, but Ricciardo is the driver with the win.

That win was the first for the team since Hamilton snagged one on his way to the record books. That makes the Norris miscue look all the worse for both the young driver and the team.

If he is supposed to be the poster child for the team and be the one leading it forward, a win is vital to his resume. For the team, they need to ensure they make the right decisions to score those wins or else they look like buffoons. Too many mistakes by the team like the one in Russia, and Norris will begin to look elsewhere when his contract ends.

With the win, he would’ve thrown the proverbial monkey off his back and his nascent career would have looked even more stellar.

For now, both driver and team will do their best to move forward and try not to dwell on a win they gifted to Hamilton.

For McLaren, the opportunity comes as a way to re-learn how to win again. With eight constructors’ championships and 12 drivers’ titles, McLaren still has championship pedigree. Now, if they could just conjure some of those old winning ways, they might add to those totals in the very near future.  For now, they will have to watch and see how the best do it.

Nascar hating, liberal loving, race-baiting Ava Ladner. How do these idiots get jobs?