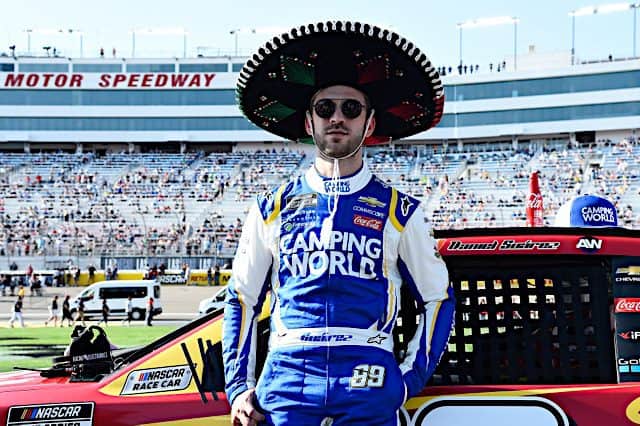 Heading into Sunday’s South Point 400 at Las Vegas Motor Speedway (Sept. 26), Daniel Suarez had a little extra motivation for the race. He hosted around 200 people for his fan group Daniel’s Amigos, a venture started in 2019, opening a new opportunity for Latino fans to hop on board Suarez’s fan train.

“One of the great things I love about our sport is that it is very family-oriented,” Suarez said in a press release. “Every time I get the opportunity to do one of these Daniel’s Amigos events, I want to make them feel like they are at home so they will come back and support us every week at the track.”

Suarez turned in a respectable performance for those fans, finishing in 15th after 400 miles. The race featured only one caution for an incident in the race, reducing the opportunity for teams to work on their cars during green flag stops. However, Suarez continuously improved his position throughout the race. After starting 26th and finishing stage one in 25th, the No. 99 Good Sam Chevrolet continued to march up the leaderboard en route to the top 15.

After a dismal summer slump, Suarez’s team has found some consistent grounding over the past few weeks. The result was Suarez’s fifth top 20 in the past six races, reflective of the consistency the newly established Trackhouse Racing Team has experienced at times this season. It was also his second top 15 in that span.

While the Monterrey, Mexico native didn’t make much noise in the race (frankly, the underdogs didn’t get much of a chance), it was the solid performance the team can continue to build on moving forward. And compared to the other new team in 23XI Racing and driver Bubba Wallace, Suarez has netted more top 15s compared to the Michael Jordan-owned outfit, with his 11 besting Wallace’s eight. Not a bad accomplishment thus far for Suarez and company.

Speaking of Wallace, he was the only other underdog inside the top 20 at Las Vegas. Wallace hauled in a 16th-place effort, the same finish he earned a week ago at Bristol Motor Speedway. Wallace didn’t have a flashy evening either, but he also was able to sneak up the running order throughout the race.

Wallace used some strategy to sneak into 10th at the end of stage two. Unfortunately, that was his only main look at the top 10 in the race. With Bootie Barker on top of the box now, Wallace has continued to form a chemistry with his new shot-caller. The two seem to be meshing nicely, posting two respectable 16th-place runs at the start of their tenure. The team has exhibited more raw speed in recent weeks, but execution and finishing races continue to be a struggle for the team. However, the bells and whistles have been cleaner as the season has gone along, and it could contribute to stronger results as 23XI Racing prepares for 2022.

With Talladega Superspeedway next on the agenda, watch for Wallace to be a dark horse for the win. The Mobile, Ala. native has a knack for superspeedway racing, earning a runner-up showing at the most recent superspeedway race at Daytona International Speedway in August.

A week after his playoff bid came to an end, Michael McDowell came home 21st at Las Vegas. Sure, it wasn’t a great result by any means. But it was far less eventful for McDowell than his Round of 16, a relief this go round after some tough races for Front Row Motorsports. 21st was actually his best since a 20th at Michigan International Speedway in August. McDowell also continues to cling to his career-best average finish thus far, with a 20.7 just edging his current career high of 20.9.

While there have been some rough patches in 2021, this season should breed optimism for FRM. They can’t finish any lower than 16th in points after making the playoffs for the second time in team history. And running consistently for top 20s is a remarkable improvement for a team which used to consider top 30s a success. The dream season for McDowell may not be over just yet, either. Heading to Talladega, McDowell has to be a favorite to pull an upset after he nearly won there earlier this season with a third-place result.

The NASCAR Xfinity Series opened their playoffs with Jeremy Clements representing the underdogs. After winning his way into the postseason in 2017, Clements’s impressive regular season was enough to point his way in this time around.

Unfortunately, he is already in a hole one race in.

A lap 31 crash derailed any hopes of a momentous start to the Round of 12. Contact between Riley Herbst and Josh Berry in a five-wide restart ignited a massive pileup entering turn 1. Clements had nowhere to go on the outside and was caught up in the melee.

The crash ended his race and relegated Clements to a 39th-place showing. While two races still remain in the Round of 12, he’s practically in a must-win situation already, sitting 39 points off the cutline in 12th.

In the NASCAR Camping World Truck Series race at Las Vegas, it looked as if Carson Hocevar was going to continue to play spoiler. While several playoff drivers endured trouble throughout the night, Hocevar stayed alive and even earned eight stage points with a third in stage two.

Unfortunately, this underdog couldn’t close the deal due to Lady Luck. With 10 laps remaining, Hocevar experienced a vibration, forcing him to pit for a cut tire. Losing several positions and valuable points, Hocevar appeared to intentionally spin as he entered pit road, bringing out a caution. NASCAR was under the same impression as well and held him on pit road for a lap. The penalty dropped Hocevar to 22nd in the race, leaving him sixth in points, 16 points off the cutline heading to Talladega Superspeedway next week.

Happy Birthday to Corey LaJoie! The Spire Motorsports driver celebrated his 30th birthday on Saturday, Sept. 25. Known to bring out the face car for the past three years, Lajoie once again had a face on the hood of his No. 7 Built Bar Chevrolet, this one being even more humorous. Lajoie celebrated his birthday weekend with a 30th-place result at Las Vegas.

Our friends at @bar_built have the most creative schemes. What do you want to see next? ??@CoreyLaJoie | @LVMotorSpeedway pic.twitter.com/W0VBRskEck

Talladega is here for all three series, one of the best races on the schedule for underdogs to shine. While it is the most unpredictable race for playoff drivers, the parity Talladega provides allow Cinderellas to lick their chops and go for a win or strong finish. The superspeedway has a history of producing underdog winners in the past, most recently with David Ragan in 2013. Watch for McDowell, LaJoie, Wallace and just about any underdog to contend for a shocking victory next weekend.

Though Clements’ playoff hopes took a grand hit, there may be no better place to get out of the hole. If Clements can hang around until the end at Talladega, you never know what could happen.

The same goes for Hocevar, though he is not in as much of a desperation mode as Clements. One thing is for certain: do not be surprised to see an underdog winner in any of the three series next weekend as we head to Alabama.

Solid top-15 finish to end the day in Vegas!

Looking forward to hitting the high banks of @TALLADEGA next weekend ? pic.twitter.com/FougifRcgF

Tfw when you see Talladega next on the schedule ? pic.twitter.com/mXwXeLMZFw

Big #NASCARPlayoffs implications as multiple contenders are involved in this lap 31 incident at @LVMotorSpeedway! pic.twitter.com/amTvV3bKQs

Bubba is averaging 19 points per event which results in a finish of 18th. He won’t finish above 18th unless some good cars have problems. Sometimes I think the Choose Lane was brought in so he could gain 3 or 4 places.