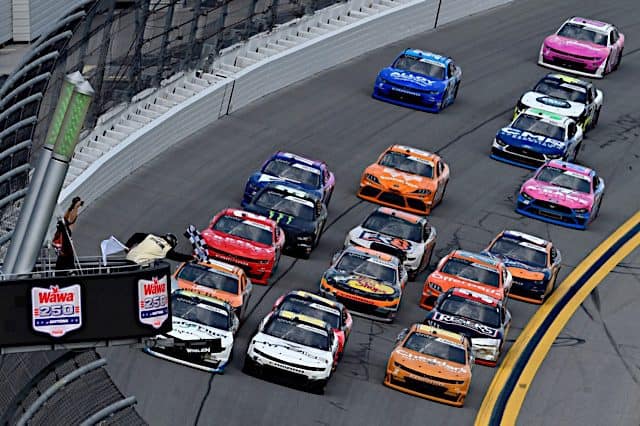 The time has arrived for the NASCAR Xfinity Series playoffs. This weekend in Las Vegas, the postseason gets underway. Even if there was no title at stake, racing purists of a certain type would be drawn in for one reason, that in the postseason, the field is void of any current NASCAR Cup Series drivers.

But of course, there is something more at stake than a strong finish to the season and hoping to build toward 2022. That incentive is to win a championship, and 12 drivers have a chance, and that opportunity begins on Saturday at Las Vegas Motor Speedway as each of the 12 playoff drivers seeks a spot in the Round of 8.

Here’s why every driver in the playoffs can win a championship, and why they won’t:

Why he’ll win the title: He’s the best candidate in NASCAR for Comeback Story of the Year not named Kyle Larson. Name a track type and he has won on most of them this year — road course, intermediate and last weekend in an absolute thriller at Bristol. Plus, one of those wins came very early this year in Las Vegas, so getting a good postseason start this weekend should be expected. In short, “The Dinger” is driven and has done everything to make a great season, except winning a championship.

Why he won’t: In the three tracks making up the middle round of the playoffs, the one that sets the field for the Championship 4, Allmendinger has had limited success with Kaulig Racing, posting a combined one top five at Texas Motor Speedway, Kansas Speedway and Martinsville Speedway.

Why he’ll win the title:  First of all, Austin Cindric can win races. He’s done that more than any other driver in this series in 2021. It helps that two of the three tracks in the first round are a restrictor-plate track (he won at Daytona International Speedway earlier this year) and the Charlotte Motor Speedway ROVAL (Cindric has multiple road course wins). He knows how to win a championship — he did that a year ago. This team knows that it can win races and win a title. That’s great confidence to have.

Why he won’t: Putting a few near-misses behind him will be important for Cindric, who came up short of a win both last weekend at Bristol and earlier this past summer at Mid-Ohio Sports Car Course.

Why he’ll win the title: There’s nothing more dangerous than someone who’s seeking an elusive title and has a chance to do so, and Justin Allgaier fits that bill. Few drivers have been more consistent than Allgaier as of late. In the last 13 races, he has finished outside the top 10 twice, and neither finish was worse than 12th. If you can be consistent on that level, you’ll be in place to take advantage of other’s misfortune.

Why he won’t: The other side of being pretty good is this — at some point, a driver might have to get a race win to make up for the unexpected. Of the tracks in the playoffs, the only one of which Allgaier has a win at is Phoenix Raceway, where he has two victories.

Why he’ll win the title: There’s nothing like well-timed momentum, and Noah Gragson has that, having broken a winless drought in September with two wins in a row. Gragson and his team are confident, and it’s hard to beat a combo of confidence and talent.

Why he won’t: Gragson picked up two wins in a row at Darlington and Bristol. The challenge? Sustaining that over these remaining races and not going on a hot and cold streak as a driver or race team.

Why he’ll win the title: Bet the mortgage on this one, folks. Justin Haley advances past the first round because he is one of the best plate racers out there. Heck, he won a Cup race at Daytona in 2019 and has a combined four Xfinity wins at Daytona and Talladega. Given that Talladega is in the first round, it’d be hard not to expect Haley’s chances of moving on to be helped by that schedule placement. Plus, when you consider the success that his teammate Allmendinger has had, Haley it can be argued, is driving for a championship-level organization.

Why he won’t: Haley’s bounced back from a rocky stretch earlier in the year which included having to miss Dover International Speedway to the COVID protocols and a five-race spell in the spring in which he had three finishes of 19th or worse. As the playoffs go on, a race win may be needed, and Haley will need to do something he has not done this year – win on a non-plate track.

Why he’ll win the title: First off, Joe Gibbs Racing helps most drivers run well, and Daniel Hemric has been no exception this year, doing just about everything but win a race with nine top 10s and 510 laps led, second-most among all drivers in the series. As far as being in a position to win goes, Hemric has excelled.

Why he won’t: You know the scene in “Major League” when Pedro Cerrano requests to sacrifice a live chicken before a game? Hemric and his team should probably think about doing just that to help win a race. Hemric has had luck go against him in just about every way that it can in terms of how to see chances of a win come unraveled. The flip side is that if that win comes in the playoffs, it could be just the momentum that he needs to win a title.

Why he’ll win the title: First of all, it’s been a career year for Jeb Burton, highlighted by his first career win that just so happens to come at a playoff track, Talladega. If he can get a good finish there, that’ll help advance past the first round. Being out of the Kaulig Racing stable will help, as well. There’s also this — due to sponsorship uncertainty, this could be his last chance at an opportunity this good, and there are few people more determined than a racer with their career on the line.

Why he won’t: Inexperience does not help Burton in this case, as he has never raced an Xfinity car at two playoff tracks — Kansas and the Charlotte ROVAL.

Why he’ll win the title: Harrison Burton‘s kind of laying in the weeds. You know he and his team are capable of winning multiple races such as they did a year ago, but that has not come together. Still, it’s not like he has had a bad season. His 19 top 10s are tied for the series lead, and if you can be consistent like that and avoid bad finishes when others cannot, that is how you win a championship.

Why he won’t: Top 10s are nice, but with points at such a premium, wins and top fives matter a lot, and Burton needs to earn those in this final stretch.

Why he’ll win the title: He has just one top five this year, and it’s the result of his lone victory — early this season at Homestead-Miami Speedway. Myatt Snider is unlike multiple drivers in these playoffs in that he has won a race this year, and knowing you can do that is a huge rock of confidence to carry into the postseason.

Why he won’t: Consistency has been Snider’s downfall this year as he has posted no more than three top 10s in a row all year long. To advance forward, this area has to improve.

Why he’ll win the title: Given that the first round includes Kansas and that Brandon Jones won there last year, his odds of a good finish there to help advance are good. As does that fact that he won at Phoenix last year, and if he is in the Championship 4, that’ll be a good bit of strong history to lean on. The first step to winning a title is getting past round one, and there’s no reason to think that Jones has good chances of that thanks to his Kansas history.

Why he won’t: He’s been a bit snake-bitten of late with two mechanical issues in the past eight races, and it’s tough to flip a switch and make that luck go your way magically. If there’s optimism, it’s this — the last intermediate track for Jones was Michigan, where he finished a season-best second.

Why he’ll win the title: Simply put, Riley Herbst is determined. Driving for a Stewart-Haas Racing team that won so many races last year and to have things go south this year, he likely knows the weight of expectations, and what better time to have it come together than the playoffs? Remember, this team can win races. All it needs are things to come together at the right time.

Why he’ll win the title: It’d be an upset of mammoth proportions, but here’s the edge that Jeremy Clements has: As a driver from a lower-budget team, he knows how to take care of his equipment and get a solid finish. If he can run at the end of every race, he has a puncher’s chance at advancing, and who knows what could happen after that?

Why he won’t: It’s a numbers game, and simply put, Clements and his team have a switchblade in a gunfight. Every other team has more resources and support, and it’s hard to overcome that through stretches such as this one.

“Why Every Playoff Driver Can & Can’t Win the Title”
How about just because there is a crapshoot element to the playoffs that could allow anyone to be champion if they just win a key race or two.

It is, but I will say that IMO this has been a better-than-average season for the Xfinity series. Even though Cindric and Dinger are the favorites, some other drivers have the potential to pull off the upset, notably Grayson and Algaier. I hope the rest of the season matches my expectations.