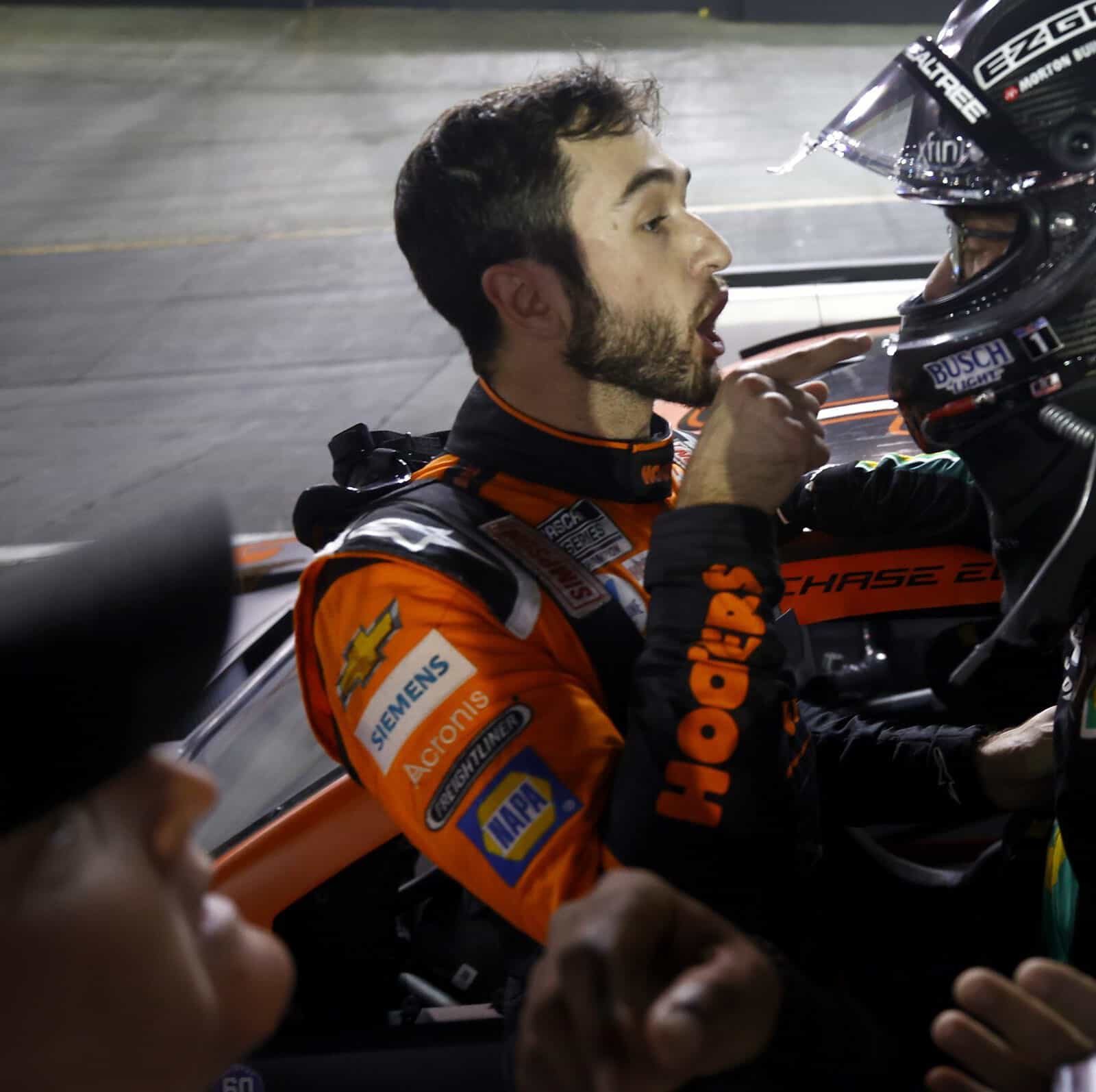 There were fenders rubbed, fingers pointed and helmets slammed.

After all that and 500 laps at Bristol Motor Speedway, Kevin Harvick was blunt.

As Kyle Larson celebrated a win in Saturday night’s (Sept. 18) Bass Pro Shops Night Race, tensions flared on pit road and in the garage between Harvick and Chase Elliott.

It was the culmination of a wild final stage around the half-mile track, which saw Harvick, Elliott and Larson race for the win.

Elliott cut a left-front tire after contact with Harvick as they battled for the lead in lapped traffic with 35 laps to go.

That forced Elliott to pit with 33 to go, returning to the track multiple laps down.

On fresher tires, Elliott eventually passed Harvick, rubbing doors with him in the process.

Larson finally took the lead with just under five laps to go, but not before Harvick got into Larson’s rear-bumper and nearly wrecked him.

While Larson won his sixth race of the season, Harvick placed second after he led 71 laps, leaving him winless since the 2020 Bristol night race a full season ago.

The post-race events began to unfold as the drivers pulled their cars onto pit road.

Harvick kept his No. 4 Ford close to Elliott’s No. 9 Chevrolet until they came to a stop nose to tail. A furious Harvick emerged from his car and confronted Elliott while still wearing his helmet.

As their confrontation played out, Elliott could be seen on the TV broadcast repeatedly pointing a finger at Harvick, who became more agitated as a crowd grew around them.

After eventually being separated, Harvick returned to his car, where he took off his helmet and slammed it on the roof.

An exchanging of words.

We told you we’d bring the energy. pic.twitter.com/vEGCHINKdq

The two drivers then shared their perspectives of the story with NBC Sports.

“I just told him it was kind of a chickenshit move that he did there at the end,” Harvick said. “We’re racing for the freakin’ win at Bristol and we’re three wide in the middle and he throws a temper tantrum. […] I was just trying to get the lead and race him hard. Then he pulls up in front of me and just sits there until I lose the whole lead. […] I watched him let [William Byron] go by and any time you run into him it’s a problem.

“It’s something [Harvick] does all the time,” Elliott, who finished 25th after leading 129 laps, said. “He runs into your left side constantly at other tracks and sometimes it does cut down your left side (tires) and other times it doesn’t. He did it to me at Darlington a few weeks ago ’cause he was tired of racing with me and whether he did it on purpose doesn’t matter. At some point you got to draw the line.

“I don’t care who he is or how long he’s been doing it, I’m going to stand up for myself and my team and move on down the road.”

Of how he raced Harvick in the closing laps, Elliott said “I just ran my line.”

Chase Elliott on his incident with Kevin Harvick. #NASCARPlayoffs pic.twitter.com/RcymskF4UX

"I'm 25, at least I took my helmet off to have a conversation with him," says @chaseelliott to @PRNlive @BMSupdates #NASCAR

The two drivers found each other again in the garage shortly after that, arguing for more than a minute and half. Toward the end of the exchange, Harvick stopped several times to say something to The Athletic reporter Jordan Bianchi, who was off to the side recording the exchange.

On The Athletic’s podcast “The Teardown,” Bianchi declined to share what Harvick said to him.

Harvick and Elliott then retreated to the No. 9 team’s hauler to continue their argument.

The meeting between @chaseelliott and @KevinHarvick after their pit lane confrontation @bmsupdates. #nascar pic.twitter.com/i2jYNpiwNE

Chase Elliott and Kevin Harvick had a second chat after their initial encounter on pit road. pic.twitter.com/edriKwbjed

The results of their conversation in the hauler remain unknown, but the tension is sure to last heading into the Round of 12, which begins Sunday, Sept. 26 at Las Vegas Motor Speedway.

The Harvick from 2001 has returned.

Desperation does that hat

Harvick has been a punk all his life.

That’s why I have never been able to like him. Punk is the perfect word.

Come on Nascar, tell us whose brilliant idea it was to put dirt on Bristol.

Who has banged more drivers, Chase, or his momma?

This is how I remember Bristol… fenders, bumpers, and hot tempers. Kudos to Elliott for standing up to Harvick. Yeah, Kevin is a punk. Always has been.

If Harvick had blatantly wrecked Larson, he’d have had 4 reasons to be looking over his shoulder for the rest of the playoffs, or at least for the next round. as he’s only got two shoulders, he made the right move to back off. As for the post race discussion. I think they both have a valid argument, & I doubt it goes much further. It did cost Harvick the win, but it didn’t drop him to 25th. With age comes wisdom, & he showed it by leaving his helmet on.

Harvick can dish it out, but can’t take. He looked like an idiot hiding under that helmet and trying to be tough.

DoninAjax
Reply to  Fed Up

He was waiting for Delana to get there and take care of Elliott.

Fed Up
Reply to  DoninAjax

Harvick makes contact? Never mind the dive bomb into the turn by elliott onto harvick right side door, which in turn washes both up the track. Elliott fans love their whine i guess. No more than a kyle busch in a hendrick car.

Elliot is and always has been a complete cockbag.