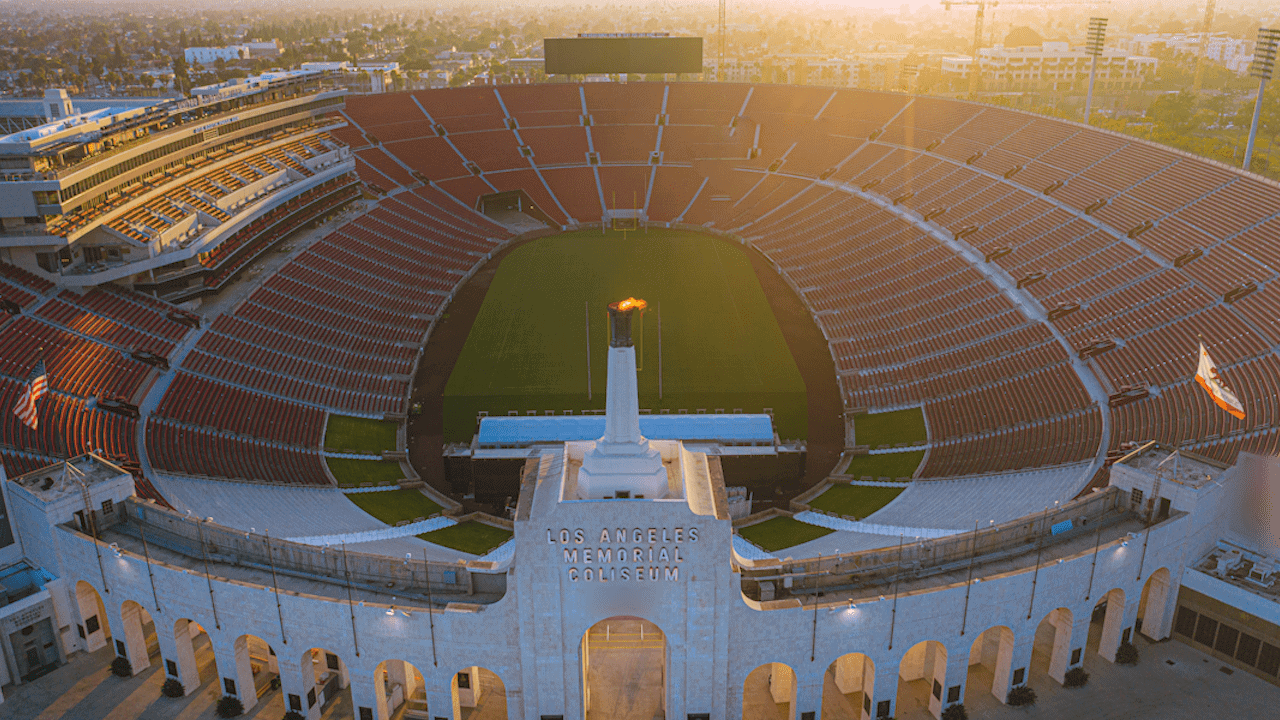 For the first time since 1971, the NASCAR Cup Series will race in a football stadium.

The best in the stock car racing business will race in the Los Angeles Memorial Coliseum as the Clash will move from its original venue of the east coast Daytona International Speedway to the west coast football stadium, FOX Sports announced Tuesday, Sept. 14. Next Gen cars will make their competition debut there as well.

The new racing venue will feature a temporary 0.25-mile asphalt short track encircling the football field. It will be the first time the series has raced on a stadium short track since Bowman-Gray Stadium in 1971.

UPDATE: The race will be open to all NASCAR Cup teams, per Steve O’Donnell, NASCAR executive senior VP and chief racing development officer on SiriusXM Wednesday.

“When we discussed this with teams, we could have just gone with, ‘Hey if you’re eligible for the Clash, that’s it,” but I think a number of teams have looked at this and said this could be a really cool event not only for our organization but our sponsors, and we’d like the ability to come out to the event,” O’Donnell said. “So we’re going to make it an invitational.

“Certainly, anyone qualified for the Clash will be in the main event. But we want to make it realistic for other teams to come out, have enough time on the racetrack, on TV, in front of the fans to make it worth their while as well. That’s the ongoing discussion in the industry: What makes this something you want to go out there and race and showcase your sponsor in the L.A. market.”

It will be Cup’s shortest racetrack in the modern era, though it is not for points.

See you in 2022, Los Angeles. pic.twitter.com/SAKJ5kiMqM

“We felt like it was important for us to get there and also have a stadium-style event, which we have never done — at least, to this extent — before,” NASCAR Vice President Ben Kennedy said. “It gives you the ability and opportunity to also come to downtown Los Angeles, too. We’ll be right in the heart of Los Angeles. I think it’s a very important move for us. I think it will be great to see the energy around that event.”

“We went back and forth on it for a while and talked to some of our teams to get their perspective on it,” Kennedy said. “Part of the reason is really going into a brand-new year, a brand-new season and a fresh track like the Los Angeles Coliseum, we felt it was important that if we’re showing off the Next Gen NASCAR in many different ways to also introduce the Next Gen car as a part of that weekend, too.”

It will mark the first time the Clash has been moved from Daytona since its inception in 1979. The venue can host up to 77,500 people and will have its event on Feb. 6, 2022 — two weeks before the Daytona 500 and one week before the National Football League’s Super Bowl.

As a fan sitting at home looking for entertainment in early February and starved for racing, I am fine with this and look forward to it. However, I can’t imagine the competitors and team owners are that happy about it. They talk about trying to save the teams money and then they do something ridiculously frivolous that will cost money and , even worse, force the competitors to waste time and effort on something that has no purpose when all they really should be doing is concentrating on preparing for the Daytona 500. If there is common sense some teams should balk at even participating. There is no upside for the teams.

JT
Reply to  Bill B

I wonder if NASCAR is planning to secretly pay out “tow money” to the invited teams, along with whatever official purse is offered? Could this also include paying air travel bills for the teams, too? I think this is why we have heard no discouraging words from the teams.

Temporary?
What’s the surface?
Safer barriers?
Cars spinning out onto the football field?

Reminds me of Richard Petty’s first Cup race at the CNE in 1958.

Sounds like a one-off event courtesy of the NA$CAR brain trust, using the term very, very loosely. I can’t believe smart business minds fell for this. Cars will be going on a LONG trip back to Charlotte on a flat-bed.

Nascar should stop all the gimmicks and just go back to racing. Real racing is what made the sport popular. Every time they make some stupid change the sport becomes less popular. A blind man can see that.

This will be a disaster. At least with an over abundant available seating, tickets should go for $5, just to fill the place up. Every seat will be a good view of this demolition derby.