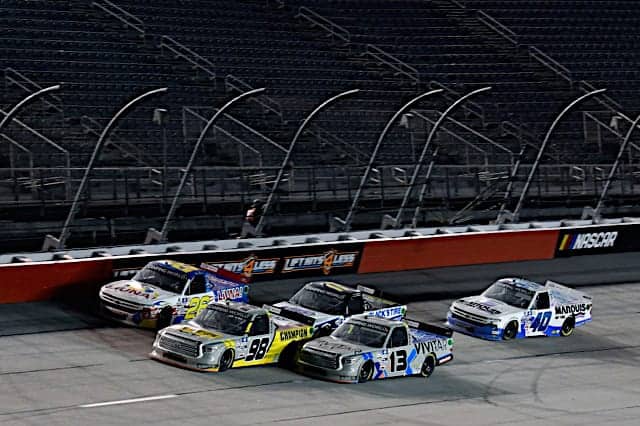 The NASCAR Camping World Truck Series was set to hold its second race of the playoffs at Canadian Tire Motorsport Park. However, COVID-19 restrictions forced NASCAR to shift the race to Darlington Raceway, joining the trucks with both the Cup and Xfinity series for a triple-header weekend.

Thirty-eight trucks are set to take the green, barring any last minute changes.

Xfinity Series regular Colby Howard is set to make his first start in the series since Homestead-Miami Speedway in 2019. Howard will drive for CR7 Motorsports in the No. 9 GCM/Highland Construction Chevrolet.

Josh Berry will continue to pilot the No. 25 Rackley Roofing Chevrolet for Rackley W.A.R. in his eighth start of the year.

Lawless Alan makes his sixth start of the season, this start being the first for Niece Motorsports in the No. 45 AutoParkIt.com Chevrolet.

Dylan Lupton will make his season debut for Kyle Busch Motorsports in the No. 51 Safelite Autoglass Toyota. It is Lupton’s first appearance since the season finale at Phoenix Raceway in 2020.

After making 19 starts in 2020, Clay Greenfield will run his own Clay Greenfield Motorsports in the No. 68 Rackley Roofing Toyota. Greenfield had previously missed three attempts in 2021 due to a lack of points.

Tyler Hill will compete in the No. 56 Chevrolet of Hill Motorsports.

Parker Kligerman is back for his eighth race of 2021 in Henderson Motorsports’ No. 75.

One notable entry is the No. 33 Chevrolet for Reaume Brothers Racing, as the driver is currently to be announced for the race.

Hacker needs to drive the 33.