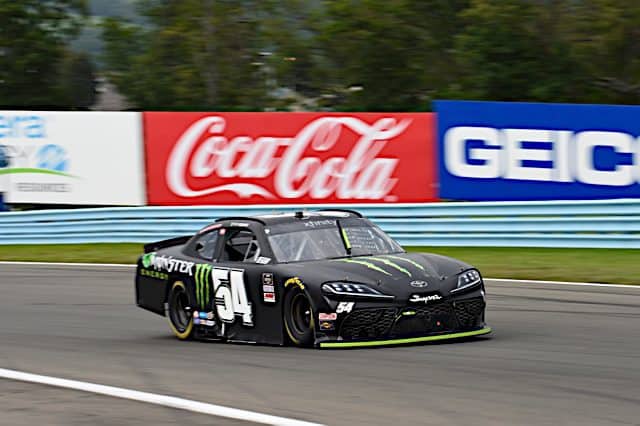 Ty Gibbs won his third race in his debut at Watkins Glen during his limited run in the NASCAR Xfinity Series in the Skrewball Peanut Butter Whiskey 200. After losing to Cory Heim in the ARCA Menards Series just a day before, Gibbs strapped into his #54 Joe Gibbs Toyota and used the patience and skill of a seasoned veteran to beat A.J. Allmendinger and Austin Cindric to win the race.

The weather that caused the previous NASCAR Camping World Truck Series race to end short held off as this race went the full 200 miles. Strategy and track position played a factor — even for Gibbs, who, despite having the winning car, had to battle back after losing the lead and dropping further back a few times during the race. Gibbs has won three of 10 Xfinity Series starts, giving the 18-year-old a 30% winning percentage.

When asked about racing with Allmendinger and Cindric, Gibbs was complimentary.

“I was so relaxed in those situations, it’s so wonderful I can’t believe it. Those two [Allmendinger and Cindric] are the best dudes on the road course ever. I don’t know how I beat them. My guys just worked so hard, I’m just at a loss for words right now.”

The second-place Allmendinger and third place Cindric are also in a points battle, with Cindric leading with four wins to Allmendinger’s two with six races before the regular-season finale at Bristol. Justin Allgaier and Harrison Burton rounded out the top five. Brandon Jones and Noah Gragson came home sixth and seventh with Jeb Burton in the eighth position. The top 10 ended with Justin Haley and Sam Mayer ninth and 10th, respectively.

Next Saturday, Aug. 14, the Xfinity Series takes to Indiana for the Pennzoil 150 at The Brickyard on the Indianapolis road course on NBC at 3:30 p.m. ET.