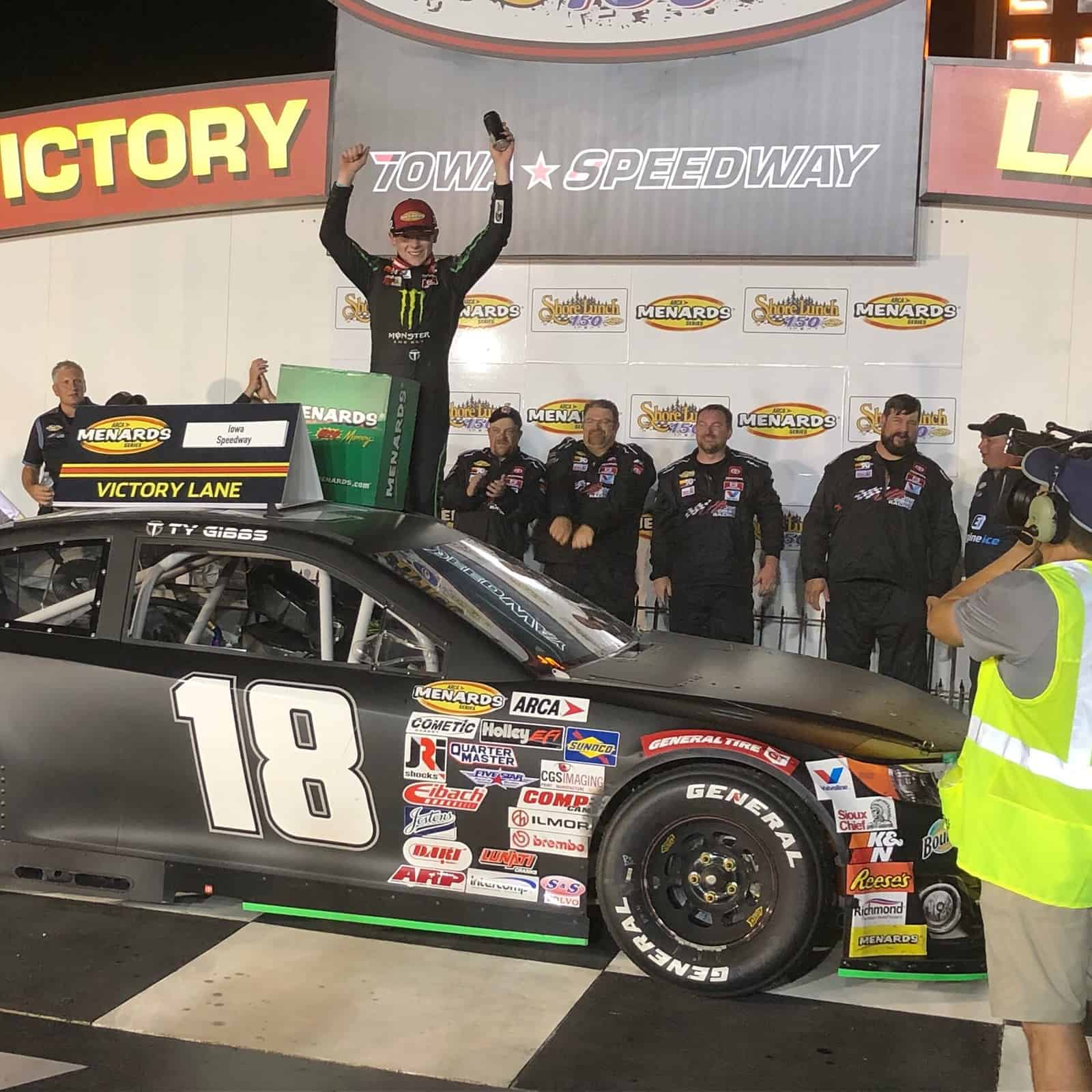 Gibbs led the majority of laps from the pole with his grandfather Joe Gibbs in attendance.

It was the second consecutive win at Iowa for the No. 18 Joe Gibbs Racing driver and the first time someone won more than one ARCA race there.

“I feel like you’re almost a painter here, you’re just working the brush here on a canvas, an open canvas,” Ty Gibbs told the MAVTV broadcast after the race. “There’s so much room to work with. It’s a Phoenix (Raceway), it’s an Atlanta Motor Speedway, there’s so many places to go the top, the bottom, you get everywhere. And all the little bumps, so much characteristics to this place. Really well done racetrack. I can’t thank Toyota enough and TRD for everything they do for my race team and for me, they help me out so much.”

It’s his sixth victory of 2021 and 14th of his career. This race was also the first of three combination races with the ARCA Menards Series East. As a result, it is his second East victory and fourth of his career.

Make that SIX wins in the ARCA Menards Series this season

Corey Heim, who was the points leader coming into this event, finished fourth after Venturini Motorsports made changes to all three cars prior to the race. ARCA rookie Nick Sanchez came home fifth, his sixth top five of the season.

There were several incidents that brought out the yellow flag throughout the event, including on lap 2 when Mason Diaz got loose and spun around. Daniel Dye was called to pit road during this caution to make sure everything was OK under the hood. Though he restarted in the back, he quickly worked his way up through the field.

A couple more cautions came within the next 30 laps, more notably one for ARCA East regular Joey Iest who spun and crashed hard into the outside wall. He was out of the car and done for the night.

Connor Jones’ No. 42 car also got into the wall.

Right after the restart, Sammy Smith smacked the wall but was able to limp the No. 81 Joe Gibbs Racing Toyota into the garage. Smith was leading the East Series points coming into this race. He later returned back to the track after the scheduled break on lap 50, but encountered more trouble and took it back behind the wall.

After another caution, Smith came out of the garage once again, about 32 laps down in 18th. He eventually retired in the closing laps.

Meanwhile, Gibbs held strong on each restart to maintain the lead for most of the 150-lap race and stayed there to take his sixth victory of the season.

The sixth race of the Sioux Chief Showdown and 12th of the ARCA season comes next Saturday, July 31 at Winchester Speedway. Coverage will begin at 8 p.m. ET on MAVTV and TrackPass on NBC Sports Gold.

When you have a ton of $$$$$ behind you, of course the NASCAR level support will prevail.

And isn’t that one of the major issues in motorsport today? One where money and access to people willing to support your career determines the success of that career.
That said, I think there is a difference between the wealthy benefactor and the wealthy car owner who is a relative. But I dont think it will change. Probably much easier to be successful by driving granddads race car than doing 9-5 in an office.

I’d love for someone to prove Ty Gibbs is cheating.

I think this proves the best car wins races, not necessary the best drivers. Could any one win in that car?
Does the Lord tell Ty to do obnoxious burnouts like that? Ty’s interviews after winning are so artificial and synthetic.

“What will it cost?”

IF you want to get your racing fix in during the time off, here’s the 1983 Busch Clash. Earnhardt is in the Bud Moore 15 FORD.