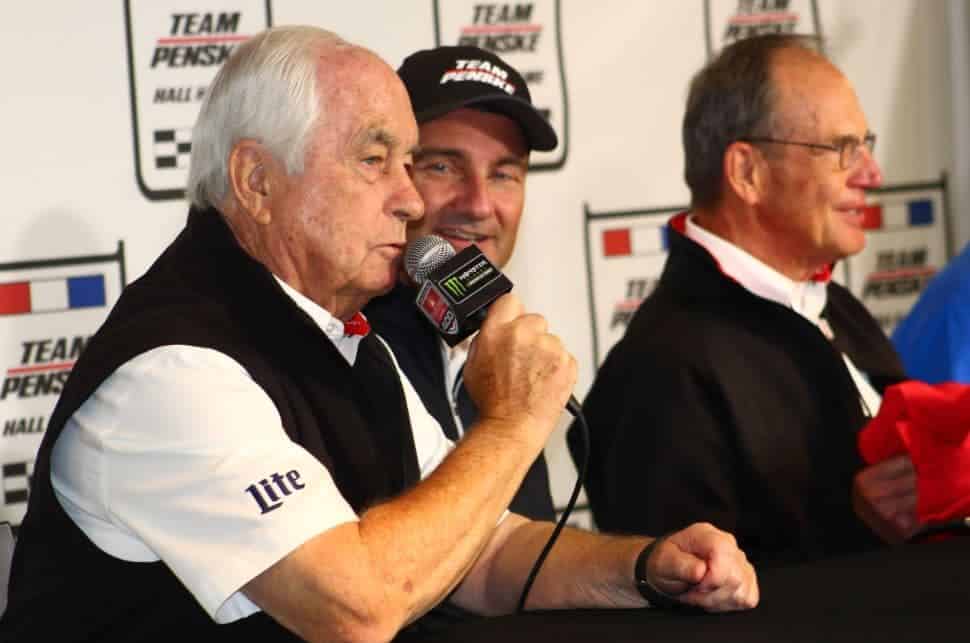 It’s official: Roush Fenway Racing announced Tuesday (July 20) Brad Keselowski will drive the No. 6 Ford next season, currently driven by Ryan Newman, and will become a partner in the team’s ownership in 2022.

Keselowski will no longer be driving for Team Penske, an organization with which he’s found the most success of his career. Team owner Roger Penske recently held a press conference announcing Austin Cindric will take over the No. 2 Ford and Harrison Burton will move into the No. 21 Ford for Wood Brothers Racing. In that press conference, Penske noted that Keselowski asked him for partial ownership of the team and said that was not an option at this time.

Keselowski has the highest winning percentage of any driver in the history of Penske’s NASCAR operation and is responsible for the first of two championships the organization has won in the NASCAR Cup Series. Not having an ownership stake at Penske was one of a few reasons why Keselowski decided to move to move on from Team Penske.

That got us thinking: Should Penske have given in to Keselowski’s demands about an ownership stake at Team Penske and kept him on the team? Clayton Caldwell and Joy Tomlinson debate.

Roger Penske Will Rue The Day

The Roger Penske/Brad Keselowski pairing was one I always thought would continue. Never did I see the day that Penske and Keselowski would split, but here we are.

You can hear the respect they have for each other in their recent press conferences about the departure of Keselowski from Penske and Keselowski’s entry to Roush. Keselowski said multiple times this week that it was a tough decision for him to leave the Penske organization. Penske had similar admiration for Keselowski during his presser last week.

It’s hard to envision Keselowski being elsewhere, but ultimately, it came down to ownership. Penske said that Keselowski approached him about partial ownership in his organization, which he declined, citing how the organization is structured. I think that’s a decision Penske will end up regretting.

It’s not often I would call out one of the most successful businessmen in the country, as Penske is. He’s a heck of a lot smarter than I’ll ever be, I can guarantee you that. However, as far as his NASCAR team is concerned, Penske may never find a driver that brought as much to an organization as Keselowski did. I believe his value was worth the risk for Penske.

He still has a few more years left to go at a high level. If you look at the numbers, there’s no question the Keselowski is Team Penske’s most successful NASCAR Cup Series driver. Letting the best driver to come across your organization walk over an ownership stake is something Penske will look back on with regret.

Who knows how long Keselowski will continue to race? But I can guarantee you this: however long it is, he is going to be competitive. He’s been competitive in everything he’s been in. Prior to Keselowski’s arrival, JR Motorsports was a decent race team. When he started driving the No. 88 Chevrolet full-time in what was then the Nationwide Series, that program became an instant championship contender. When he left that team, they were never the same until they started their alliance with Hendrick Motorsports.

He was a championship contender the moment he got to the No. 2 car and they never looked back. He’s won countless Xfinity and Truck races in addition to his 35 career Cup wins, all but one of which came with Penske.

Add that with the Next Gen car, where I believe a driver is going to be more prevalent because of how close the cars are going to be setup wise, it makes an elite driver like Keselowski even more valuable.

All you need to know is how Roush Fenway Racing pretty much moved Heaven and Earth to get him in their organization. There’s no doubt a lot of that was to get a driver of his caliber on their team.

Roush Fenway has struggled over the last six or seven years, winning just two races since 2014. A driver of Keselowski’s caliber would have never made the jump from a top-tier organization unless of course they got a sweet deal.

Certainly, giving a driver ownership and a say in the competition is a great deal. However, they wouldn’t do that for just anyone. They know how valuable he is inside and outside of a racecar.

Another reason why I think Penske made a mistake is that drivers becoming team owners may be a trend over the next few years. With the Next Gen car being, so profitable several drivers may want to get their hands in the ownership ranks. Jack Roush and Keselowski both said during their press conference that they think this could start a trend. I agree with them.

If that is indeed the case, in order for Penske to stay competitive in the driver market, he’s going to have to give away some ownership stake sooner or later. Not every driver will demand that, but if other teams are willing to give that, you’re going to lose out on drivers eventually. As it is now, Team Penske has already lost the best driver to ever come across their organization because of it.

The other thing that is overlooked is the popularity of Keselowski. He’s the kind of driver you want to build your team around. He can lead a team and an organization, just like he has over at Team Penske for the last decade or so. Keselowski was a driving force in adding Joey Logano to the team and it was a move that paid off. His leadership is something that can’t be overlooked, and I am surprised Penske let it go to Roush.

That’s not to say Logano doesn’t have the capability to be a leader. But look at Team Penske’s driver lineup for next season. You can’t tell me they are better off in the driver category entering 2022 than they were in 2021. Even five years down the road, you may look back at Keselowski’s time at Penske and say that the organization never had a better group of drivers.

You can’t underestimate how big of a loss this will be for Team Penske. Penske let his best driver and veteran leader get away over a few dollars. He will look back on this move with regret. — Clayton Caldwell

The Timing Was Right for Keselowski To Leave

For one, Keselowski owns Keselowski Advanced Manufacturing, a different type of company from what Penske Corp. and its subsidiaries do. Penske Corp. is mostly for transportation, though it does include Team Penske and Penske Entertainment (which owns Indianapolis Motor Speedway). Conversely, Jack Roush has Roush Performance and founded Roush Enterprises that are part of the automotive industry.

During a video conference with reporters, Penske explained why Keselowski wouldn’t be able to be a part of the ownership team at Penske Corp.

“He and I talked about this probably over the years, there was discussion that long term he’d like to have ownership in the team,” Penske said. “But the way we’re structured at Penske Corp. and the subsidiaries that we have, it wouldn’t work out, and he understood that. I think that as we came to the end of our contract at the end of last year, obviously he looked to see what was there I’m sure. We were having negotiations but COVID obviously slowed things down. […]

“Basically, the final meeting we had he said that he had an opportunity that would give him ownership and I said at that point that we wouldn’t have that available.”

Last year, it started to become clear that Keselowski wouldn’t be with Team Penske much longer, as he had only signed a one-year deal through the end of 2021. While the rumors of Keselowski buying into Roush Fenway Racing did not appear back then, it seemed to have paved the way for it to happen. This is especially true based on Penske’s comments on the subject. But the split was not on bad terms.

”It was amicable all the way, still is,” Penske said. “Brad’s done a hell of a job for us and I think that he’ll bring a lot of value to Roush Yates in the future.”

While it would make sense to see Penske have a driver as a future co-owner of the team, Penske’s company is built differently and I believe someone else that is familiar with the organization as a whole should be considered for this role (like the current Team President Tim Cindric, perhaps). Besides, Team Penske also has an IndyCar Series group of championship-winning drivers, whereas RFR is currently only in NASCAR. Keselowski can just focus on this group for now.

Furthermore, the Next Gen car is set to run next year, which is a good time for Keselowski to change teams. It’s almost like starting from scratch, since we don’t know for sure how the cars will run in a competition setting. Keselowski’s manufacturing knowledge could come in handy for Roush Fenway and could bring the organization back to its winning ways.

He’s thinking long-term about the direction NASCAR is going as well as his place now and in the future. After all, he’s 37 years old and has been in the Cup Series over 10 years. He’s still a great driver and doesn’t seem to be slowing down anytime soon, but now he has a plan in place to keep him around NASCAR as long as possible. – Joy Tomlinson

I’m assuming that all of Penske racing assets are under the same corporate umbrella as his publicly traded company? If so and it’s kinda like Berkshire in structure then unfortunately he’s right. There is no easy, cheap, or even guaranteed way to give him a piece of just the NASCAR team.

He probably could have offered shares in Penske Corp just like executives are awarded stock based compensation. But that stake would be very small sub .25% I’m sure assuming I’m correct and Penske Corp is worth over 7.5 billion.

He could have tried issuing a 2nd class of stock that was just the NASCAR stuff but all the current shareholders would still own what % of the team they do now. Plus there’d be lawsuits.

He could spin the NASCAR team off into its own near corporation. But the current shareholders would be entitled to a % of the new shares equal to their current holdings. If Joe Blow owns 3% of Penske he’d 3% of the new company as well. Plus I’m sure there’d be more lawsuits. Plus if the cup team ever were to start losing money bankruptcy would be a real threat.

Last and worst option would be for Penske the person to purchase the race team from Penske Corp. This would have all the drawbacks above plus even more lawsuits.

In the end it really isn’t possible if they are structured the way I believe. It’s been a while since I’ve had call to exercise these brain muscles thanks! Felt good.